The COVID-19 pandemic will go down in history because of the extraordinary impact it has had on health, the economy and people’s lives across the world. Mongolia is no exception and sound government policy is essential to steer it through the next phase of the crisis. 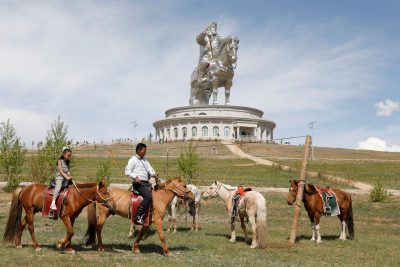 Despite its proximity to China and close ties with South Korea, Mongolia responded quickly and with great success against COVID-19. By mid-February, the government declared a state of alert and implemented a broad array of strict measures. Its borders were sealed to everyone (even Mongolian citizens), large public events such as the traditional new year were cancelled, and people were ordered to stay at home.

All levels of schooling were moved online and non-essential businesses were either closed or shifted to work-from-home arrangements. The government has worked closely with the World Health Organization and delivered a succinct message about social distancing, wearing face masks in public, and the need for frequent handwashing. These swift actions successfully barred the spread of the virus and as of early August there is no community transmission and no record of any COVID-19-related deaths.

Yet the lockdown has undoubtedly stalled the economy. The economy shrank by 10.7 per cent in the first quarter and total exports fell by 28 per cent. The transportation sector experienced a 29.4 per cent drop. The mining sector has been hit hard as a full border closure with China has caused mining exports to cease completely. Although mining activity resumed in mid-March, with coal production almost returning to pre-pandemic levels in June, semi-annual production is under half of that in 2019.

Mongolia is no exception to the swathe of countries bolstering their economies with fiscal stimulus measures. The parliament approved a plan to mitigate the socio-economic impact of the pandemic on 9 April and the government’s stimulus package will be in effect between 1 April and 1 October. Measures include personal income tax and social insurance contribution exemptions for both employees and employers, a corporate income tax waiver and a five-fold increase in the Child Money transfer — a welfare program for families with children who live below the poverty line. The initial estimate of the package is MNT5.1 billion (US$1.8 million) and is subject to further changes.

The Bank of Mongolia and the Financial Regulatory Commission have also implemented a slew of temporary financial leniency measures to prevent a financial crisis. They include a 2 per cent drop in interest rates, the relaxation of reserve requirements for commercial banks, a six month deferral of interest and principal repayments, and loan reclassification and restructuring.

Although the stimulus package has brought some relief to businesses and households, delayed government action has been criticised by academics, businesses and the public. In a survey conducted by the Trade and Industry Chamber of Mongolia, 65 per cent of businesses reported a significant fall in revenue due to the lockdown. Within two months, over 52,000 applications (out of 72,209 borrowers) requested to defer mortgage repayments. More than 37,000 loans have been reclassified in accordance with new loan standards.

But the pause in economic activity has already impacted the government’s budget. Mining revenue makes up about 20 per cent of budget revenue, so the fall in mining exports weighs heavily. Tax revenue fell by around 20 per cent and social security contributions were down by 40 per cent in the first half of the year.

Not surprisingly, the biggest increase in expenditure occurred in subsidies and transfers — now 2.5 times that of 2019. While countries tend to avoid unnecessary spending, Mongolia has more than doubled its expenditure on domestic investment. This is despite the fact the government is heavily indebted, with public debt around 65 per cent of GDP — of which 85 per cent is foreign debt and in need of servicing. This hinders the government’s ability to cushion against present and future economic shocks.

Undoubtedly, the poor are being hit the hardest. Mongolia has a relatively high poverty rate of 28.4 per cent as of 2018. This will certainly get worse without government support. Currently, the expanded (albeit temporary) safety net provides some relief for the most economically vulnerable, although a large section of the population will face an elevated risk of falling into poverty when the stimulus package ends in December.

It is almost certain that the COVID-19 recession will deepen further. The government needs to evaluate its impact on the economy and people’s livelihoods in order to enact fiscal stimulus that is both cost-effective and sizeable. The 2020 budget review should be submitted urgently by the new government formed after June parliamentary elections.

The government faces the extraordinary challenge of boosting the economy while preventing a second wave from hitting Mongolian society. More resources need to be allocated to those who are likely to be worst affected. The bottom line is to continue to stop community transmission of the virus while preventing as many people as possible from falling into poverty and supporting the reintegration of workers back into the economy.

Ariun-Erdene Bayarjargal is an Associate Lecturer in Economics at the Australian National University.