According to traditional trade theory, the direction and magnitude of product flows are principally determined by the comparative advantages of trading countries. These comparative advantages depend on endowments of production factors: labour, capital (including human capital) and land (or natural resources). Forces integrating the different factor endowments of various countries — especially capital and technologies from advanced economies and cheap labour from developing countries — drive the development of global value chains (GVCs). 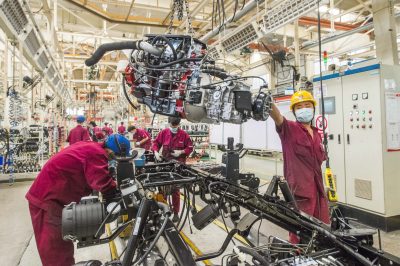 COVID-19 will likely accelerate the move toward ‘peer value chains’ among countries with similar institutional arrangements. In addition to traditional production factors, the quality of domestic institutions may become an important determinant of a country’s comparative advantage. Nathan Nunn conceptualises ‘contract-intensive’ products, which have complex supply chains that involve multiple transactions at various stages of the production process.

Just like a country with an abundant labour force has a comparative advantage in the production of labour-intensive products, the quality of a legal system may determine a country’s international competitiveness in ‘contract-intensive’ products. Indeed, Nunn empirically demonstrates that countries with superior legal institutions have an advantage in the production of products that require complex transactions, and are more likely to export such products.

A country with an appropriate legal framework to protect intellectual property rights has an advantage in knowledge-intensive industries. Likewise, domestic institutions that support fair and transparent economic activities can be complementary sources of competitiveness. These include competition rules, licensing and clear government procurement principles. Equally important is the institutional aspect of domestic technology development and use. Intellectual property rights for digital technologies, data localisation and cross-border data flows and commerce are emerging issues for global value chains.

Still, some less novel factors remain relevant. For example, what matters to a country for entering technology intensive GVCs is the extent that the country’s technological standards are compatible and harmonious with the global technology ecosystem. Even such basic institutional aspects account significantly for a country’s competitiveness, in addition to the level of physical infrastructure — or capital factors — and the availability of corresponding operational skills — human capital factors.

Multinational firms are also increasingly committed to corporate social responsibility like environmental protection and fair trade. Some pay strict attention to the relevant institutional schemes of sourcing countries in organising cross-border supply chains. The presence of appropriate environmental and labour standards enhances a country’s international competitiveness as a global supplier.

Why, then, will institutions matter more for GVCs?

First, the importance of labour in determining a country’s comparative advantage is declining. Wage differentials among countries were once major drivers of GVCs. But with the surge of new technologies, unskilled labour in developing countries — which is increasingly being substituted with machines — is rapidly losing its economic value. This has occurred as a consequence of the extensive installation of digitally automated production processes in advanced economies, empowered by autonomous robotics, smart sensors and artificial intelligence.

Second, there is a dramatic change in economic environments amid rising geopolitical tensions, particularly driven by the US–China trade war and security conflict. Firms are becoming highly susceptible to various forms of state intervention such as asset freezes and forced technology transfers. Robust institutions can provide predictability for firms’ international operations and serve as impartial guards against discretionary interventions by local governments into business activities. In expanding supply chains, risk-sensitive firms will look for countries with high quality institutions, or at least similar institutional attributes to their home countries.

Universal rule-making about the best forms of domestic institutions has been a key agenda of international organisations like the World Trade Organization (WTO) and the International Labour Organization. But not every country is a member of these bodies, and the influence of international organisations in the realm of domestic institutional rule-making has faded rapidly, compromising global governance on a multilateral basis.

But even in the absence of multilateral frameworks, countries may still find it beneficial to strive for institutional reform on a unilateral basis, reforming and improving domestic institutions to bolster their competitiveness. This has been seen with the unilateral tariff cuts on goods trade in many East Asian countries, far beyond their WTO bound tariff rates.

GVCs will evolve with the rapid advancement of transportation modes and information communication technologies, as well as the rising concern with diversifying production capacities after the COVID-19 pandemic. It is likely that GVCs will continue to expand geographically. But the reorganisation of value chains is no longer driven by the arbitrage forces on wage differentials between developed and developing countries because wages matter less in the era of robotics and artificial intelligence. Instead, GVCs will foster ‘peer value chains’ among countries with similar institutional attributes.