As COVID-19 cases began to mount in Japan in February, it became clear that the government needed to respond with strong policy measures. It was crucial to increase testing capacity and adopt isolation measures to contain the virus and allow economic activity to resume quickly. The Japanese government needed to set and clearly announce a timeline and numerical targets for testing capacity and medical care provision. Some of these ideas have been incorporated in the government’s Basic Policy on Economic and Fiscal Management and Reform 2020, published on 17 July 2020. 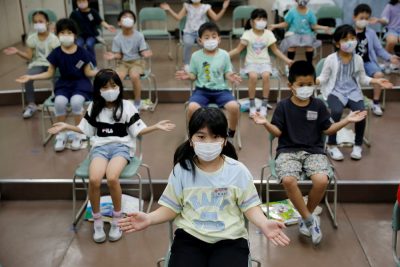 The major challenge Japan currently faces is its extremely limited testing capacity compared with other advanced countries. Japan’s polymerase chain reaction testing capacity is only 32,000 tests per day (as of 12 July), compared to 400,000 in the United States and 160,000 in Germany. Japan needs to systematically increase its capacity to 200,000 by the end of November.

Japan’s ultimate target should be to reopen the economy and to carry on normally as before. In other words, Japan must avoid using economic shutdowns as an emergency measure to stop infection. If the country continues the cycle of reopening the economy and shutting it down when cases spike again, the number of suicides due to economic difficulties could exceed the number of deaths from the COVID-19 virus itself. Japan could also find itself in an economic recession of unprecedented scale, leading to losses of about 30 trillion yen (US$285 billion) if economic growth contracts by six percent.

To avoid an economic shutdown, Japan needs to prevent the number of cases from exceeding and overwhelming hospital capacity. Top priorities should be to increase Japan’s capacity to provide medical care, enforce measures that can help prevent cases from becoming severe, and minimise community transmission of COVID-19.

Increasing medical capacity will require a plan for bolstering the availability of hospital beds for severe cases, intensive care units and personal protective equipment. To prevent cases from becoming severe, Japan needs to secure quick access to hospitals, as needed, and ensure appropriate health management in waiting facilities, such as hotels for asymptomatic and mild cases.

The number of tests must be expanded for three categories of people.

The first category is symptomatic patients and those who they have come into contact with. The definition of ‘close contact’ is currently too narrow. This definition must be expanded to include a broader range of contacts and asymptomatic people.

The second category is workers in hospitals, aged care facilities and welfare facilities for the disabled. These workers should be thoroughly tested because infections at these facilities could result in severe and fatal cases. All those being admitted to hospitals and other such facilities should be tested upon admission.

Testing in all these categories must be increased. Japan expects to have between 100,000 to 300,000 influenza patients per day every winter. The capacity of COVID-19 tests should exceed or be comparable to these figures because the symptoms of COVID-19 and influenza are generally indistinguishable.

Currently, the total number of newly hospitalised patients is 45,000 per day. Ideally, all of them should be tested for COVID-19. The number of visitors from abroad would be 20,000 per day if levels returned to 20 per cent of the pre-COVID-19 rate. During the Tokyo Olympic Games, immigration would potentially need to conduct about 100,000 tests per day, as it was estimated by the Japanese government that 1 million people will enter Japan in the two weeks of the Olympic Games.

The cost of increasing testing capacity and implementing isolation measures is well below that of an economic shutdown. Several months of shutdown has resulted in a growth rate of minus 6 per cent, translating to a loss of 30 trillion yen (US$285 billion). The cost of increasing testing and physical distancing measures would be a few trillion yen (US$28 billion) at most. It should be obvious which is the better policy option.

Keiichiro Kobayashi is Research Director at the Tokyo Foundation for Policy Research and Visiting Professor of Economics at Keio University. He is part of the expert advisory panel to the Japanese government on responding to COVID-19.