In one of its bolder steps, Australia’s new Defence Strategy and Force Structure Review is proposing a radical redefinition of the geographical reach of Australia’s strategic priorities. It rejects the expansive view of Canberra’s last major defence policy statement — the 2016 Defence White Paper — which accorded equal priority to local, regional and global missions and commitments. 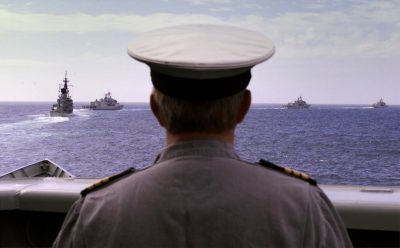 Instead, the Defence Review says defence planning will focus on Australia’s immediate region — ‘ranging from the north-eastern Indian Ocean, through maritime and mainland South East Asia to Papua New Guinea and the South West Pacific’.

This is — in theory — quite an important shift. The definition of Australia’s area of strategic interest has always been a key factor in determining its strategic posture and the kinds of forces it needs. For decades there has been a policy tug-of-war between those who think Australia’s defence should focus closer to home and those who argue for a broader view.

Since the 1970s the regionalists have mostly prevailed until the 2016 White Paper endorsed a more global view. The Defence Review seems to mark a return to the regionalist perspective, refocussing defence strategy on Australia’s own backyard as strategic risks in Asia grow.

But things are not that simple. The new Review defines ‘immediate neighbourhood’ in a very expansive way, extending from Australia’s territory all the way up through mainland Southeast Asia to the borders of China and India. According to the review, this vast area constitutes a single undifferentiated region of strategic priority for Australia.

This departs from how regionalist policymakers have traditionally seen the region. Key policy statements like the 1987 and 2000 Defence White Papers divided the wider region into a series of concentric bands and gave a higher priority to those closer to Australia. This provided a robust basis for setting Defence Force priorities by making it clear, for example, that forces for maritime operations in Australia’s immediate approaches had a higher priority than forces for land operations on the Asian continent.

This seems absurd, but it meshes with another significant shift in the way the Review describes Australia’s defence policy. Since the early 1970s every Australian government has committed itself to the goal of defence self-reliance — the idea that Australia should be able to defend itself against direct attack without relying on the armed forces of its allies. This commitment was heavily watered down for the first time in the 2016 White Paper and it has almost entirely disappeared in the Defence Review.

The natural conclusion to draw from this is that the government has abandoned the idea of self-reliance and now believes that its security depends on fighting alongside allies as far from its shores as possible. This marks a return to the policy of ‘forward defence’ which shaped Australian forces and drove its commitments in the 1950s and 1960s.

Forward defence fell out of favour after the failures of the Vietnam War, but perhaps it helped Australia and its neighbours to navigate the turbulent 1950s and 1960s. And one could argue that self-reliance was only ever taken seriously in relation to the relatively weak threats that could be posed by Indonesia. No government has seriously thought of defending Australia independently against a major power like China, which is the contingency we must take seriously today.

So perhaps a return to forward defence is a good idea? That depends on three things.

First, can Australia be sure of finding allies in its new and expansively-defined ‘immediate neighbourhood’ to fight alongside? The Defence Review talks a lot about cooperating with Asian neighbours to uphold regional peace and stability, and assumes that the United States will be there too. But this cannot be taken for granted. Countries closer to China have very different interests and priorities to Australia’s, and the extent of the future commitment of the US to Asia is uncertain as the costs and risks of confronting China grow.

Second, if the crunch came, would Australians be willing to fight so far from their own shores? The memory of Vietnam should create caution about committing future security to wars in Asia.

And third, can Australia be sure that it could make an effective military contribution to a major Asian war so far from its shores? Not on the evidence of the Defence Review, which despite all the hype leaves Australia’s future force plans and Defence budget virtually unchanged.

So a return to forward defence looks, at this stage, a risky and ill-considered policy. And this matters because these policy concepts shape real decisions involving many billions of dollars. The new Defence Review’s priority for its super-sized vision of Australia’s ‘immediate neighbourhood’ will drive investment towards power projection forces which are going to be sitting ducks for the new maritime denial forces proliferating in the region.

It will also drive investment away from Australian maritime denial forces, which are necessary to defend Australia’s real immediate neighbourhood and territory and safeguard it against power projection by others. Working out how to do that, even against China, is the great defence policy challenge Australia faces today. And the new Defence Review completely fails to address it.

Hugh White is Professor Emeritus at the Strategic and Defence Studies Centre, The Australian National University.