Circumstances are changing rapidly on the Korean Peninsula. For six years, the international community shunned North Korean leader Kim Jong-un. The highest profile individual to meet with him was basketballer Dennis Rodman, while Kim turned down the few requests to meet from world leaders. Now in the span of a few months North Korea will potentially hold summit meetings with most of the key players in the region. 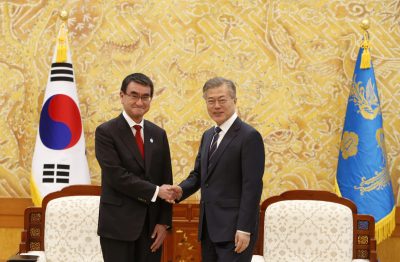 US President Donald Trump accepted Kim’s invitation to meet before negotiators had ironed out the details of an agreement on North Korean denuclearisation, and in so doing, Trump implicitly agreed to a new framework for discussing denuclearisation. North Korea has long wanted a direct meeting with the president of the United States and has avoided a return to the Six-Party Talks for the time being, so Kim’s one-on-one with Trump is a win for North Korea.

This is not to say that the upcoming summits are independent meetings. They should be viewed as interlocking summits that work to move the process towards North Korean denuclearisation, not as an opportunity for each country to deal with its individual concerns with North Korea. The United States will need to work in close coordination with South Korea, Japan, China and potentially Russia in order to develop a common perspective of what denuclearisation looks like and what elements should be in a final agreement with North Korea.

This makes the upcoming inter-Korean summit meeting on 27 April integral to the whole process. South Korean President Moon Jae-in will need to discuss options for denuclearisation that are consistent with the Trump administration’s goals while also exploring measures within the framework of sanctions that will advance inter-Korean cooperation. This requires a common approach to denuclearisation with which the United States is comfortable as well as a shared understanding of the feasible types of inter-Korean cooperation. The two summits need to complement each other rather than reveal divisions between the US and South Korea.

Each new summit should then advance the broader agenda and work to reinforce prior summit agreements. The initial summit meeting between Trump and Kim would function as the forum for discussing a framework or set of principles for denuclearisation, while the proposed trilateral summit between the United States, South Korea and North Korea would focus on post-denuclearisation security arrangements on the Korean Peninsula. Should the initial summit meetings go well, additional meetings may be required to discuss economic cooperation and potentially a peace treaty.

Parallel to these summits, there need to be meetings between the United States, its allies, China and Russia. The recently announced Trump–Abe summit for 17–18 April (along with a potential Moon–Abe summit) should entail an agreement between the United States and Japan on a common approach to denuclearisation and on how Japan should approach a potential summit meeting with North Korea (should one develop). Russia is in a position to play spoiler to any agreement, so despite concerns over Russia’s interference in the 2016 US elections and its recent attempt to assassinate a former Russian spy in the United Kingdom, a meeting between Trump and Russian President Vladimir Putin may also be necessary.

In the absence of a united front, North Korea will look for opportunities to divide the parties and maintain parts of its weapons programs. This means that the Trump administration needs to refrain from its ‘America First’ approach to avoid creating an opportunity for North Korea to exploit concerns over US assurances and reliability.

Unfortunately, the United States has already lost the initiative in the current process. By impulsively acting to accept Kim’s offer, Trump has opened the door for China to deal itself back into the process on its own terms with the recent summit between Kim and Chinese President Xi Jinping. The leaders’ meeting provided North Korea with an opportunity to improve a relationship that had been deeply damaged under Kim Jong-un and to create leverage in talks with the United States. The United States will need to maintain a close working relationship with China lest North Korea convince China to relieve economic pressure before an agreement is reached.

While the initial negotiations will take place on the leadership level, subsequent senior working-level negotiations will be critical in fleshing out any deal. Details of any agreement (such as permission from Kim Jong-un to allow verification) will need to be worked out on this level first to ensure that North Korea does not create loopholes that would allow it to continue building parts of its weapons program. A decision will also need to be made on whether all negotiations should be left at this level after the initial summits or whether later summits or direct communication between leaders will be needed to iron out final details.

By agreeing to meet Kim Jong-un, Trump has shaken up diplomacy on the Peninsula. Neither success in the Kim–Trump summit nor even the summit itself are assured. If the summit is to be successful, all relevant parties need to map out how the US–North Korea summit and other related meetings will work to achieve North Korean denuclearisation. If they do not, then they provide North Korea with an opportunity to play one country off the other and skew the negotiations in its favour.

Troy Stangarone is the Senior Director for Congressional Affairs and Trade at the Korea Economic Institute of America. The views expressed here are the author’s alone.