India faces an uphill battle before it will have an efficiently operating Goods and Services Tax (GST). Besides confusion over the applicable rate for certain products among retailers, service sector companies also face the daunting prospect of having to deal with not just the Union but also 29 other state tax administrations, each with its own norms and distinct attitude towards rent seeking.

Prime Minister Narendra Modi has reportedly spent hours reviewing the country’s preparedness for the 1 July roll-out of the new uniform tax. But some confusion is bound to remain and will be have to be dealt with as it arises. 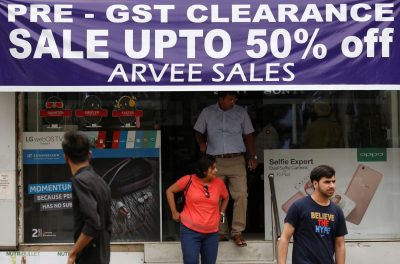 Despite the strong appeal of the simplicity of a uniform rate of GST is not appropriate for India due to its continental scale, regional and economic diversity, and fiscal federalism. The proposed four tier rate structure is sensible given that historical reforms like the GST must evolve over time and provide space to states to assert their rights. Hopefully the GST Council will remain an active and responsive body to facilitate and direct this evolution.

There are two critical issues that could still derail the introduction of GST. The first is the vexed problem of sectors where the entire chain of production has until now operated without any tax payments, largely in cash. There are streets after streets in cities across India where business thrives without any trace of documentation or credit payments.

How will these businesses, whose countrywide scale could be gigantic, be brought under the GST regime? Will businesses find some way to beat the system, or alternatively, will they shut down their non-tax paying units for fear that a transition to the GST regime may implicate them for past tax evasion? Should the government announce a kind of ‘grandfathering’ of all past tax liabilities to encourage such businesses to make the transition without fearing for their past sins?

Second, anyone who has had even a cursory brush with the Indian trading community would know that these stalwarts pay tax most reluctantly. They have perfected their practices over centuries to successfully escape revenue demands of rapacious emperors and the British colonial administration. The resourcefulness of India’s trading and intermediary class was on display in the phase after demonetisation. They managed to squirrel their undeclared incomes into bank accounts, effectively spurning the government’s offer of getting a reprieve after paying a penalty.

Whether or not they are able to beat the system yet again will become clear once we know the result of the tax department’s success, or lack thereof, in seizing illegal incomes deposited in nearly 1.8 million dubious bank accounts with average deposits of a whopping Rs 33 milion (US$512,000).

This large Indian trading community may play truant with GST and not submit to its stiff requirements easily. They are already publicly lampooning the measure as too complex, unnecessary and costly to implement. They will surely play the victim card and this refrain will become stronger over time. Their opposition is most audible in Kolkata which, having lost its manufacturing base, has emerged principally as a trading hub for eastern and north-eastern states and Bangladesh. Could this be the underlying reason for West Bengal dragging its feet on GST?

Hopefully the Finance Ministry has considered this likely opposition. While it is a good start, it will take more than the creation of cells within relevant ministries to tackle this opposition that has the potential to throw a spanner in GST implementation. Modi’s Bharatiya Janata Party (BJP) and its allied formations like the Swadeshi Jagaran Manch must rise to the occasion and create the societal support for the measure.

Going forwards, the talk of establishing a Price Monitoring Mechanism (PMM) as envisioned under the GST Act should be approached with caution. Authorities in the Bureau of Costs and Prices can be high-handed and have the potential to become hate objects very quickly with their arbitrary behaviour and rent-seeking propensities. The PMM is best delayed until it is unavoidable for stamping out rampant mal-practices by industry and business in the post-GST phase.

By holding it in reserve, Finance Minister Arun Jaitley will convey two important signals. First, that the government trusts Indian business to honestly implement GST. This could in itself be a much-needed new beginning. Second, the threat of strong action against maladroit elements will continue to exist and perhaps act as sufficient deterrence. It is worthwhile giving competitive market forces a fair chance rather than pre-empting it by administrative action.

A longer version of this article was first published here in Mail Today.