Countries across the world are already attempting to decouple global value chains (GVCs) in preparation for the post-COVID-19 future. This is both motivated by security concerns brought about by COVID-19 and a continuation of the post-global financial crisis deglobalisation campaign. But are the forces of decoupling really operating unimpeded, or will GVCs prove too resistant? 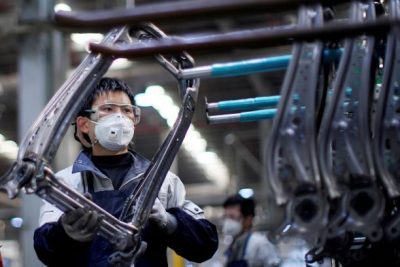 The present international trade order is dominated by GVCs that account for two-thirds of intra-industry trade flow. GVCs link clusters of competitiveness and technology where states and corporations are deeply co-invested in providing infrastructure and institutions that connect producers’ supply chains.

COVID-19 is accelerating the decoupling that was already rising from increasingly strained relationships between China and the West. The crisis brought to light an apparent overdependence on China for critical medical supplies and other key production components as shortages materialised worldwide. Potential vulnerabilities to US technology supply chains and rare earth resources suddenly became real. COVID-19 also deepened the perceived risk of doing business in China — especially against the backdrop of a quickly deteriorating geopolitical situation where international trust is fast evaporating.

Despite the rhetoric of self-reliance and the return of domestic manufacturing, no single country can produce the whole set of activities facilitated by GVCs. GVCs and their primary clusters are sticky due to high fixed costs and immense economies of scale that stubbornly resist decoupling by external forces with competing locations.

GVCs depend on infrastructure built by governments to entice and cajole investors. This infrastructure — the foundations of East Asia’s competitiveness — have since matured into resilient manufacturing locations. Few governments will be able to afford such groundwork at the scale and speed necessary to duplicate East Asia’s export platforms post-COVID-19.

GVCs also rely on private investments geared toward shareholder return and the market’s ‘invisible hand’. China’s industrial FDI stock rose to over US$1.6 trillion in 2019 from US$190 billion in 2000. Decoupling would require countries to replicate present supply chains with an equivalent investment level over a much shorter period while offering no meaningful incentive to move away from efficient locations. The US$2.2 billion handed out by the Japanese government pales in contrast to the US$8.8 billion required to build a single Foxconn plant, or the US$12 billion for a TSMC microchip plant.

The mass relocation of GVCs would also require a trained and competitive workforce equivalent to East Asia’s labour pool. China has well over 100 million workers in manufacturing — more than the United States, Germany, Japan, France and Italy combined. The sheer disparity in the size of China’s labour force entrenches GVCs and prevents mass scale decoupling.

The resilience of existing GVCs is further cemented by the lack of alternative locations that could host GVCs. Most score worse on FDI attractiveness — including Mexico, Thailand, Vietnam and Indonesia. Comparatively small Malaysia is an exception. While India could have been a potential contender, its lack of infrastructure framework, ever changing rules and unaccommodating labour and land regulations are major drawbacks.

These hard truths are not changing in the foreseeable future, and international trade must continue. Ever more complex products require critical materials and components that are unevenly distributed across the world — inevitably creating interdependence among countries. For example, 85 per cent of rare earths are controlled by China, the Democratic Republic of the Congo controls 60 per cent of cobalt and Chile boasts 57 per cent of the world’s lithium. Decoupling cannot be fully effective as any relocated clusters would still rely upon vital materials dominated by certain countries.

As decoupling is costly, impractical and marred with uncertainty, greater trade integration should be on every country’s agenda. Supply chain diversification — instead of decoupling — is the surest path to security. Entanglement arising from integration also offers states the capacity to leverage trade as a diplomatic solution by increasing the cost of defecting from GVCs. Decoupling cannot provide this mechanism short of military action that threatens more than it protects.

While multilateral institutions might not be perfect, they still offer the best framework moving forwards — particularly the World Trade Organization. Rules and responsibilities will need to be renegotiated into a new global deal that fully accepts differences in political systems among members. Though this is a challenging undertaking, especially in the shadow of great power competition, it is a better pursuit than decoupling.

Forces working to disband the existing trade order may be gaining momentum — emboldened by the unfolding COVID-19 crisis — but GVC stickiness ultimately delineates the boundary of what is actually feasible.

Dr Christian Bachheimer is a Group Director of an Indonesian business conglomerate and a member of the Advisory Council at the Fletcher School of Law and Diplomacy.