The historic Trump–Kim Singapore summit in June and subsequent high-level meetings offer a diplomatic opening on the Korean Peninsula. Progress has been made on the non-nuclear fronts of the Singapore deal, such as the suspension of the US–South Korean joint military exercises and the repatriation of the remains of the US prisoners of war. But the current cold streak of progress on denuclearisation suggests that North Korea is determined to set as slow a pace as possible. 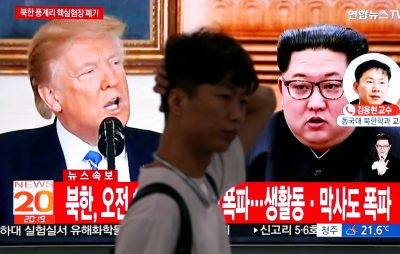 Real challenges await the region as it sets out on this long, bumpy journey to navigate the difficulties of denuclearisation and at the same time deal with an unpredictable, secretive and cunning regime. These challenges must be dealt with before any meaningful technical steps can be made. US demands for rapid denuclearisation and its obsession with the complete, verifiable and irreversible denuclearisation (CVID) of North Korea do not offer much hope for progress.

CVID is not a realistic goal, as any denuclearisation deal — big or small, vague or specific — with the current North Korean regime is almost certainly reversible. With too much focus on CVID, there is a risk that recent productive developments will be scrapped, in the same way that previous flashes of hope have quickly dimmed.

The most pressing goal with North Korea is obviously denuclearisation but any efforts towards this goal should be in accord with a bigger, more comprehensive picture — that is, to transform the North Korean regime into a denuclearised normal state. The objective of the United States and its allies should not be to defeat the regime but rather to help it build normal relations with the outside world and to secure its future as a normal state.

Despite the media frenzy over the recent diplomatic developments with North Korea, any nuclear deal could quickly prove ephemeral. Even if US President Donald Trump had struck a ‘grand deal’ on CVID with North Korean leader Kim Jong-un in Singapore, what is the real value of such a deal when Kim — or Trump himself — could scrap it at his convenience? CVID would have been useful in 2003 when it was first introduced as a framework for North Korea’s then still-nascent nuclear program. Today, North Korea is no longer a country with nuclear ambitions but one with demonstrable nuclear power.

The United States needs to be realistic when it comes to the likelihood (or unlikelihood) of North Korea’s irreversible denuclearisation. North Korea has the techniques and manpower to assemble new nuclear weapons in just a few months or weeks. Even at this moment, despite the country’s promise to work towards denuclearisation, North Korean nuclear engineers are likely training a future generation of nuclear experts so as to keep the country’s nuclear knowledge from ever being eradicated.

Verifiable denuclearisation also faces great challenges. Unless Kim voluntarily produces a full declaration of North Korea’s existing nuclear sites and stockpiles, it will be impossible to pinpoint all of the country’s nuclear and missile infrastructure. Even with international or US inspectors free to roam the country — itself an unlikely prospect — locating each and every uranium enrichment facility and hidden mobile missile launcher is simply not feasible. In the wake of the Singapore summit, North Korea may already be attempting to deceive the United States about the extent of its nuclear arsenal and infrastructure.

Kim’s vigorous summit diplomacy in the first half of 2018 greatly changed political dynamics in the region. He first reached out to South Korea and took advantage of the progressive Moon government, which was desperate to improve inter-Korean relations and reduce tensions on the Peninsula in time for the Winter Olympics. With Seoul’s backing, Kim secured a date for the then-unthinkable summit with Trump and avoided the imminent threat of war.

Then, leveraging on the summit with the United States, Kim skilfully drew China closer to his side by holding three meetings with Chinese leader Xi Jinping. Kim garnered support for his strategy towards the United States and at the same time demonstrated to Washington that China had his back. Even Trump’s abrupt cancellation of the planned summit failed to catch North Korea off-guard — rather, it triggered a surprise second round Kim–Moon summit, which highlighted Kim’s strategic prowess.

In the post-Singapore process, too, North Korea is setting the pace much at its own convenience. There is no urgency on Kim’s side because, unlike Trump or Moon, he has no term limit and can therefore set long-term goals. In the worst-case — but not unlikely — scenario, Kim may just be trying to run out Trump’s clock.

Kim may be dreaming of a normal state in possession of nuclear weapons but that is clearly not on the agenda of the United States or the region. The global community should make it clear that such an agreement is unacceptable. But by focussing solely on denuclearisation, the community risks losing sight of the bigger, more important picture: guiding North Korea’s desire to become a normal state so that this desire eventually overrides the country’s obsession with nuclear weapons. After all, a normal North Korea could well achieve CVID, but CVID will not by itself deliver a normal North Korea.

This article appeared in the most recent edition of East Asia Forum Quarterly, ‘Peak Japan’.