The United States and the DPRK have been trading diplomatic blows over Pyongyang’s ongoing missile testing and its contentious nuclear program. The Trump administration has called for a fast-tracked installation of Terminal High Altitude Area Defense (THAAD) — a controversial missile defence system based in the ROK. 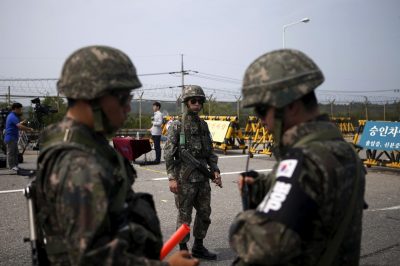 US military ‘signalling’, namely the (faux) deployment of a carrier group to the Korean Peninsula, has been accompanied by rhetoric proclaiming the end of ‘strategic patience’ and pledging ‘maximum pressure’. But this US escalation is strategically unsound, and discounts its own interest in upholding the status quo on the peninsula.

In general, deterrence is the attempt to prevent an unfavourable behaviour by convincing the actor contemplating such an action that the cost will exceed the benefit. To understand the nature of deterrence on the peninsula, it is necessary to look at its history. After World War II, Allied powers cleaved the peninsula into two distinct republics in a region otherwise absent of ethnic, religious or cultural differences. As such, the communist DPRK and Western-backed ROK immediately saw each other as threats.

By 1948, the DPRK had procured military assistance from the Soviet Union, giving it superiority over the South’s military. Then South Korean president Syngman Rhee appealed for US assistance to avoid being ‘pushed into the sea’, to which the response was ‘ask the United Nations’. Conversely, then North Korean president Kim Il-sung, emboldened by Soviet assistance but anxious about Rhee’s unification ambitions, knew that he could not wait for a Southern collapse before attacking. This exigency was mirrored by Rhee, who believed the communists would overrun his republic before he could wrest complete political control.

Assuming their opponent would strike at any moment, both prosecuted plans to invade, starting the Korean War. To bring an end to the conflict, the ‘Armistice Agreement’ was signed in 1953. It introduced foreign powers who would henceforth uphold the balance of power on the peninsula. The intra-Korean struggle — now frozen but not resolved — would be subsumed into the Cold War system of competition between the US, USSR and the People’s Republic of China. This foreign-enforced balance muted the signals instructing the two countries to cannibalise one another.

Notably, the United States had threatened the use of nukes against the DPRK before and after the Korean War. In 1958, it placed nuclear weapons in South Korea, reinforcing the 1953 US–ROK ‘Mutual Defence Treaty’. This placed the ROK under the US nuclear umbrella, diminishing the DPRK’s conventional deterrent. But it was not until the DPRK’s discovery of the ROK’s clandestine nuclear program in the late 1970s that Kim Il-sung viewed the acquisition of nukes as necessary for state survival.

Clearly, on the peninsula political and military escalation did not create deterrence — it perpetuated insecurity until conflict arose. Both republics identified each other as aggressors and were convinced that their survival hinged on moving first. This was underpinned by ideological differences that delegitimised the other’s state-making efforts and unification ambitions. Today, the United States and the DPRK share this situation.

Escalation most acutely fails to engender deterrence when adversaries fail to comprehend the security fears of their opponent. By characterising their involvement from the outset as a defence of the ‘rule of law’ against the ‘criminal’ communist DPRK, Washington has failed to understand how its involvement could be cast into the localised struggle between the republics. It has failed to recognise that Pyongyang’s security fears may still be linked to the ideological and unification conflicts that underpinned the Cold War security dilemma.

Conversely, the DPRK cannot imagine how its nuclear belligerency could be characterised as attempted blackmail of a superpower. Measures which Pyongyang view as demonstrating resolve are cast as crude attempts to win compromise from larger actors with conventional superiority.

Moreover, actors on the peninsula fail to distinguish between defensive and offensive behaviours. The DPRK’s nuclear belligerency is not offensive belligerency. It is a misguided attempt to show resolve in the face of vulnerability to US–ROK conventional forces. North Korean missile testing and threats to strike US naval vessels simply reinforce Washington’s view that the DPRK is an aggressor who threatens regional security. By continuing to show firmness and resolve, both sides feed into mutual hostility that must eventually bear conflict.

In line with this misunderstanding, statements by the Trump administration expose an intent to enact regime change — militarily or otherwise. This shows an undervaluation of the status quo: regional stability remains dependent on a stable — albeit divided — Korean Peninsula. Until denuclearisation or a peace treaty can be reached, the status quo remains worthy of preservation. The United States should avoid escalation until the spiralling nature of the peninsula can be assuaged.

In light of the historical failure of deterrence, the Trump administration seems too at-ease with escalation on the Korean Peninsula. If policymakers on both sides ignore the fears motivating their rivals in the Korean security dilemma, they will confront a dynamic that may produce both armed and nuclear conflict.

Nicol Brodie is a research student at the ANU.