As the pandemic dominates international media headlines, tension in the South China Sea has slowly intensified in the background. Recent incidents include the sinking of a Vietnamese fishing vessel after being hit by the Chinese Coast Guard near the disputed Paracel Islands and the dispatching of Chinese seismic survey vessel Haiyang Dizhi 8 into Malaysia’s exclusive economic zone. Beijing’s also taken steps to institutionalise control over disputed waters, announcing in April the establishment of two administrative districts under the authority of Sansha city. 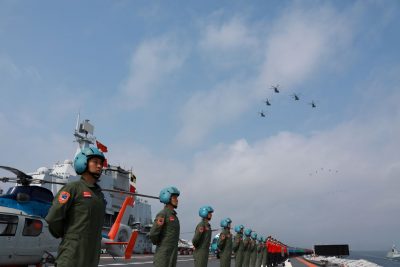 Some believe that Beijing is taking advantage of the pandemic to increase its presence in the disputed waters, but such Chinese actions are not new. These recent activities are part of China’s long-term plan to establish de facto control in the South China Sea.

Beijing has long adopted a two-pronged approach. On the one hand, it has continuously stepped up its military presence and capabilities by building artificial islands and deploying law enforcement vessels to assert maritime rights and claims in the disputed waters. On the other hand, it has sought to portray itself as a cooperative partner to Southeast Asian claimants.

For much of the three years following the Permanent Court of Arbitration’s 2016 tribunal ruling, China appeared to taken a more conciliatory stance in the South China Sea. It agreed to negotiations for the Code of Conduct (COC). Chinese Foreign Minister Wang Yi even expressed hopes for COC negotiations to be completed by 2021. Some analysts however, argue that this was part of China’s attempt to cushion the fallout and improve its regional image following the 2016 ruling.

For the Southeast Asian claimants, the willingness to call out illegitimate Chinese actions in the disputed waters has oscillated over the years. The pendulum-swinging behaviour of Southeast Asian states stems from the security–economic conundrum that small states face vis-a-vis China.

China has been extremely skilful in using economic incentives to silence Southeast Asian countries in the South China Sea. Philippine President Rodrigo Duterte, for example, has on multiple occasions expressed his willingness to put aside the 2016 arbitral tribunal ruling in exchange for Chinese investment and cooperation on infrastructure projects. The pressure on Southeast Asian countries is likely to increase in the aftermath of COVID-19 as many countries face economic recession.

Only four out of ten ASEAN member states are claimants, which greatly hinders the regional organisation’s ability to form a united response toward China. ASEAN is further hindered by fundamental differences in member states’ interests. Still, with China making incremental gains in the South China Sea every day, it is crucial for ASEAN countries to get their act together if they want to avoid the worst-case scenario of China establishing de facto control over the disputed waters.

Recent actions by Southeast Asian countries point towards an increasing willingness to publicly call out China’s aggression and disregard for international law in the South China Sea. In December 2019, Malaysia made a partial submission to the UN Commission on the Limits of the Continental Shelf (CLCS) regarding its continental shelf in the northern part of the South China Sea. In May 2020, Indonesia cited the July 2016 arbitral tribunal ruling when it submitted a note verbale to the United Nations in response to the series of circular notes filed by China in relation to Malaysia’s CLCS submission.

Recent Chinese actions have perhaps awakened Southeast Asian countries to the reality of Beijing’s continued salami-slicing strategy to gradually and systematically establish its presence and legitimise its claims in the South China Sea. Recent Chinese aggression stands in stark contrast to Beijing’s portrayal of itself as a country willing to cooperate and compromise in the South China Sea.

While challenges in formulating a united ASEAN response to the South China Sea remain, a focus on a rules-based maritime order can serve as a unifying factor for Southeast Asian countries. These countries need to recognise that Beijing’s blatant disregard for international law in the South China Sea is a threat to regional security and the interests of all small states. International law provides small Southeast Asian countries with an equal platform to safeguard their interests in their relations with major powers like China.

At the 36th ASEAN Summit held in June, the Chairman’s Statement contained an explicit mention of the 1982 United Nations Convention on the Law of the Sea (UNCLOS) as the basis of settlement of the dispute. While similar remarks have been included in previous Chairman’s statements, the latest arguably places stronger emphasis on the importance of international law and, in particular, on UNCLOS.

This ‘stronger’ ASEAN stance could be attributed to Vietnamese stewardship in its role as ASEAN chair. The challenge for ASEAN moving forward is to sustain this current momentum.