The opening months of Donald Trump’s administration suggest that its policies are likely to steer the ANZUS alliance over rocky ground. The ‘America first’ platform on which Trump was elected, and which he continues to project, is poised to lead the United States down two contrasting paths, both of which threaten Australian and Asia-Pacific regional security. What can Australia do to keep ANZUS on track? 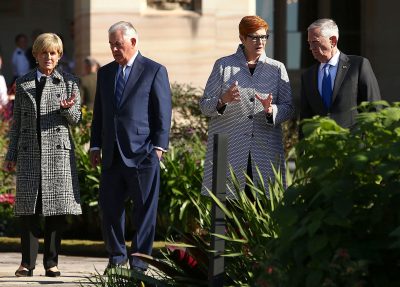 The first possible scenario is that of US isolationism, in which the United States reduces its efforts to encourage other countries to follow its ‘rules-based’ order. US allies in the Asia Pacific value this order as the foundation for regional security. US engagement with the region supports the institutions that facilitate constructive interactions between otherwise competing countries, thus creating a permissive environment for free trade. But the refrain of ‘America first’ suggests that the Trump administration may seek to reduce US commitments overseas and pay more attention to challenges at home.

If the United States were to go down this path, regional partners and allies fear that the Asia Pacific will become far more unstable. A receding Pax Americana would mean that Chinese island building in the South China Sea is more likely to accelerate, increasing tensions between Beijing and all other claimants.

On the other hand, regional actors also worry that ‘America first’ means that the United States will simply act more unilaterally in Asia, without regard for its allies. This might mean taking a more confrontational approach over the South China Sea. Hints of this can already be seen in the framing of recent developments regarding North Korea’s nuclear program. Either of these could quite conceivably increase tensions. The current Chinese leadership has invested significant political capital in the South China Sea, and there is no guarantee that China will respond as positively to the Trump administration’s risky ‘maximum pressure’ posture on North Korea to the extent that US policymakers would desire.

Both scenarios threaten Australia’s interests, which calls into question the value of the ANZUS alliance. Unfortunately, in wider society as well as within ‘elite’ circles of commentators and observers, many Australians think of ANZUS in sentimental, almost personal terms. At least for some of its supporters, ANZUS has morphed into a goal in and of itself, escaping the constant critical appraisal necessary for conducting effective alliance politics.

Still, beneath this sentimentality lies a functional reality of an alliance based on current shared interests. Australia supports the US-led order as it benefits from the stability that measured US influence creates across the region. It also supports the alliance because it benefits directly from ANZUS, through cooperation with the United States in areas such as defence technology and intelligence sharing. Australian contributions to the relationship include regional diplomatic support, military and intelligence-gathering capabilities, forward-basing options and vast military training areas. Australia also confers legitimacy upon US diplomatic forays and military action — some highly controversial in nature — as a middle power ally in support.

Some commentators speculate that the jolt of Trump’s election win will encourage some healthy reflection on the alliance. They support formulating alliance calculations on the basis of a dispassionate analysis of strategic costs and benefits. They assert that Australians will need to reign in their enthusiasm, lessen their sentimentality and frame ANZUS in terms of pragmatism. The core of the alliance will be better off for it.

This approach also highlights the need for Australia to be more proactive in selling to the US administration the mutual benefits that the alliance brings both partners. In particular, its geostrategic location provides key maritime and intelligence capabilities in support of US interests. Australia also remains committed to major US defence projects, such as the F-35 Joint Strike Fighter program, and can canvass its growing relationships with other US allies in the region, especially Japan.

Australia can also play a role in persuading the United States of the wider benefits of staying engaged in the region. Secretary of Defense James Mattis and Vice President Mike Pence have worked to reassure US allies in the region that the Trump administration is committed to its security role here. Of course, past US administrations and the wider US policy community are acutely aware of this. Australia needs to exert itself more vigorously in building up this awareness inside the new administration.

Framing of the issues is key. If Australia were to play a meaningful role in coaxing the United States into maintaining its strong strategic presence in Asia, it would have more success leveraging off visible material contributions and deepening military ties than merely appealing to traditional but arguably ephemeral notions of historical friendship and shared democratic values.

Ultimately, Australia and other regional powers may fail to keep the United States engaged in the Asia Pacific. A realistic Australian strategic policy assessment should therefore also include a contingency plan in the event that the Trump administration were to eventually retract from the region. Yet such a plan is still likely to produce an outcome less desirable than what is currently in place.

A well-functioning ANZUS alliance remains the best policy alternative for Australia. Australian policy leaders need to underscore to Trump and the wider US government the obvious material benefits of the alliance rather than perpetuate vague rationales based on historical factors that may no longer be integral to effective Australia–US security relations.

Thomas Price completed a Master of International Relations at The Australian National University. The views expressed in this article are his own and do not represent the views of any other party.

This article is part of the ‘Australia, Japan, and regional security’ project organised by the Coral Bell School of Asia Pacific Affairs at ANU and the Policy Alternatives Research Institute at the University of Tokyo.