South Korea’s public health-based response to COVID-19 has been rightly lauded as a successful model for other democracies. Seoul’s strategy of testing, contact tracing, isolation and treatment has become a gold standard for flattening the virus curve and bending it toward zero. Schools were closed, large gatherings prohibited, tele-working encouraged, masks ubiquitous and social distancing implemented. South Korea has avoided the harsh lockdowns adopted in other countries. Its economy is disrupted, but not so dramatically as in the United States and Europe. 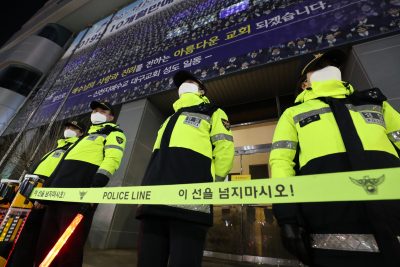 But the long-term success of South Korea’s strategy is not assured. There is no guarantee that Seoul’s model will function during a second wave. New cluster outbreaks emerged right as newly confirmed cases were consistently reaching zero. One can also quibble about compulsory testing and quarantines for overseas arrivals, as well as privacy issues with contact-tracing. Still, these are small issues within a larger success story.

But even success stories have a dark side. And unfortunately, the government’s response to COVID-19 has revealed serious discrimination in South Korean politics and society.

This first became visible in South Korea’s response to a ‘super spreader’ cluster that emerged from the Shincheonji Church, a Christian offshoot considered a bizarre cult by most Koreans. Shincheonji doctrine and practices — eschatological messianism, secretiveness, misleading recruiting and member exploitation — are unflattering. Yet, aggressive membership recruitment and shady leadership practices are prevalent throughout the South Korean religious landscape. In any event, Shincheonji members’ feeling of social ostracism and discrimination is well-founded. They faced widespread invective online following the outbreak and more than 500,000 people signed a petition to Prime Minister Chung Sye-kyun calling for the Church to be disbanded.

Discrimination against members of a legal religious organisation is problematic. In the context of COVID-19, the problem is exacerbated because it makes contact tracing difficult. Shincheonji members were reluctant to voluntarily admit attendance at services and the government ultimately forced Shincheonji to release its membership list and pressured congregants to be tested. This heavy-handed approach represents an invasion of privacy and freedom of religion. Yet few South Koreans protested the hard-line response.

The government has offered no explanation for this discrimination. It only claims that it is difficult to determine which foreign nationals would be eligible. This is doubtful, as the government has no trouble determining which foreign nationals are required to pay taxes. More importantly, it begs the question of why the presumption is not that all legal, tax-paying, employed immigrants should be eligible for payments. Low-income foreign nationals — service workers, agricultural workers, certain factory employees and students with part-time jobs — are not receiving relief payments solely because of their nationality.

The South Korean government has also recently introduced a new regulation aimed at preventing imported COVID-19 cases. The new rule requires long-term visa-holding foreigners to apply to the immigration office for permission prior to leaving the country, and then to have a medical check-up abroad within 48 hours of returning to South Korea.

Not only is this policy onerous, it is dangerous as it forces returning travellers to go to medical facilities where higher concentrations of sick people means a potentially higher likelihood of becoming infected with COVID-19. Even worse, it is discriminatory. South Korean citizens are not required to take these steps when travelling abroad; nor are non-citizen ethnic South Koreans that hold an F4 visa. This is blatant racism in public policy, as the only relevant criterion for the new regulation is ethnic belonging.

Finally, a recent COVID-19 infection cluster originating in nightclubs in an area popular with the South Korean LGBTQ community has highlighted South Korea’s widespread homophobia. Of the more than 5000 patrons who wrote their names and telephone numbers on club entry log books — a requirement for clubs to re-open — around 2000 were falsified. Members of the LGBTQ community fear that publicising their private lives would result in family ostracism and workplace discrimination.

South Korean society’s intolerance of homosexuality has contributed to making contact-tracing slower, less comprehensive and more coercive. South Korea requested telecom data to geolocate mobiles present during cluster formation, but clearly lost time in the containment race. Unsurprisingly, the South Korean LGBTQ community has been slandered in social media since the outbreak. The government’s decision of anonymous testing for this cluster is cold comfort.

South Korea’s COVID-19 response has, on balance, been highly successful. But it has also revealed and accentuated pervasive discrimination. One could have hoped for better as President Moon Jae-in is a progressive human rights lawyer ostensibly committed to greater equality. He still has time to improve on this front, but the window is closing. Moon is more than three years into a single-term, five-year presidency and his bandwidth is limited due to preoccupation on issues related to North Korea, the economy and frictions in the US–South Korea alliance.