After the excitement of the 2016 parliamentary and 2017 presidential elections, and the 2017 International Monetary Fund-brokered bailout, Mongolia’s relatively quiet 2018 was welcome respite. Rather than continuing to follow the meandering path of political advancement of previous decades, Mongolia is getting bogged down in an unhealthy mix of popular frustration, corruption and a powerful party duopoly. Higher global copper prices are bringing economic growth to buffer the population against political mismanagement, for now. 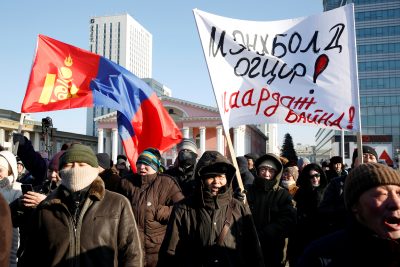 Frustration with Mongolian political parties has been growing for some years, even while support for democracy as a political system remains steadfast. Three issues are raising voters’ political ire: the absence of political leadership, the lack of implementation of laws and regulations, and corruption.

Since President Khaltmaa Battulga’s election victory in July 2017 with DP, he has launched a small number of populist trial balloons but otherwise remains silent on specific policy ambitions.

His MPP rival in the election, Miyegombo Enkhbold, let himself be filmed discussing the prices for public offices to be distributed as spoils of victory in the 2016 parliamentary election — a scandal that has dogged him ever since. By now, the real scandal is that he continues to serve as speaker of the Mongolian parliament despite these allegations.

The positions of both prime minister and MPP chairman have been occupied by Ukhnaa Khurelsukh since October 2017. He narrowly survived a vote of no confidence in parliament at the end of November 2018. The main goal of the Khurelsukh cabinet is to ensure the government’s continued survival by managing intra-party tensions.

Poor implementation of laws and regulations is visible to citizens all around Mongolia. The summer of 2018 brought flooding and another outbreak of foot-and-mouth disease. Now in the winter, Ulaanbaatar is once again not only the coldest capital in the world but also suffering from extreme air pollution, a fate that provincial capitals around Mongolia share.

Instead of addressing some of these real policy needs, an MPP supermajority is unable to move constitutional reform discussions forward or take real steps against corruption, even in its own ranks.

A glimmer of political hope came in late 2018 when enterprising investigative journalists and outspoken academics pieced together the mechanics of a corruption scandal. The scandal involved the use of the official Small and Medium Enterprises Development Fund as a self-service bank offering low-interest loans to politically connected business people. While machinations around parliamentary support for Khurelsukh overshadowed the scandal after some weeks, the possibility of political opposition in the form of spin-offs from the two big parties or the development of new political forces offers some hope for political renewal.

Mongolia’s economic situation has been dependent on commodity prices and the mood of the international mining industry for a decade now. In 2018, copper remained at a favourable price for Mongolia and ongoing construction at the giant Oyu Tolgoi mining project contributed to GDP growth of over 6 per cent.  This growth is set to continue into 2019.

At the same time, coal is no longer the economic driver that it was with top export partner China now relying on other suppliers and moving away from coal as a source of energy. Agriculture continues to provide some diversification, as has the growth of domestic tourism and some niches like the increasingly vibrant fintech sector.

In foreign policy, Battulga is not pursuing an international profile in the way that his predecessor did, eschewing visits to the United Nations General Assembly and close relations with Mongolia’s ‘third neighbours’ (industrialised democracies around the world). Battulga’s regular meetings with Russian President Vladimir Putin seem to be built largely around a shared enjoyment of martial arts rather than advancing policy. A change might have come at the Shanghai Cooperation Organisation’s 2018 summit in Qingdao, China, but Battulga’s suggestion that Mongolia join the grouping was dismissed by many in Mongolia.

The most spectacular wrinkle in Mongolia’s international relations occurred in late July 2018 when Turkish security agents apparently tried to abduct a Turkish educator who had been residing in Ulaanbaatar for many years. The Erdogan regime claims the educator is affiliated with its nemesis, the Gulen movement. The abduction was thwarted by popular mobilisation, but questions remain about the alleged collaboration of Mongolian security agencies with this Turkish incursion.

While Mongolia lost out to Singapore in the sweepstakes to host a Trump–Kim summit, Foreign Minister Damdin Tsogtbaatar continues to play an active role in diplomatic efforts aimed at de-escalating tensions on the Korean Peninsula. If these efforts lead to more concrete steps and negotiations, look for Mongolia to take on a more active mediating role.

With recent scandals, party schisms and the 2020 parliamentary election looming, political change does seem to be in the air. While such change is likely to result from a period of uncertainty and transition, in the long term it could bring Mongolia real improvements.

Julian Dierkes is an associate professor at the University of British Columbia’s School of Public Policy and Global Affairs.