In the last 20 months, Mongolia has seen a parliamentary and presidential election, three changes in governments and several associated bureaucratic personnel rotations, all in the context of a sovereign debt crisis. This political turnover has led to serious neglect of the real challenges facing Mongolia. 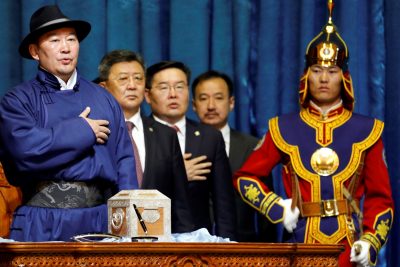 On October 18, the Mongolian parliament confirmed a new cabinet under Prime Minister U Khurelsukh. The previous government under J Erdenebat had lasted a mere 15 months. It was dismissed despite Erdenebat and Khurelsukh’s party — the Mongolian People’s Party (MPP) — holding a 65 seat majority in the 76 seat State Great Khural, Mongolia’s unicameral parliament.

Erdenebat’s ousting — despite their parliamentary supermajority — was due to the surprising defeat of MPP party leader M Enkhbold in the 2017 presidential election with whom Erdenebat was closely associated. Enkhbold had deliberately stayed away from the vagaries of executive power after the MPP’s electoral triumph in the June 2016 parliamentary election. But this, coupled with memories and allegations of corruption and an uninspired campaign, sunk him in the presidential contest.

Enkhbold’s defeat encouraged factionalism in the MPP, with Khurelsukh leading the charge for a younger, reformist wing of the party. But the new prime minister is still constrained by the need to compromise with Enkhbold’s ‘city’ faction and other MPP grandees.

In Mongolia, just as in other democracies, the electoral cycle produces a parallel cycle of legislative and governmental activism that alternates with election campaigning. With the next parliamentary election nearly three years away, now would usually be the time for action, especially given the acute need for leadership in the face of Mongolia’s smouldering fiscal crisis. Yet there is little sense of a new beginning with any real promise of policy change under Prime Minister Khurelsukh. Instead, party factionalism means the dominant sentiment is doubt over the long-term viability of the new government.

New President Kh Battulga has not given any indication that he is pursuing a concrete political agenda beyond battling political rivals. A vague speech to open parliament touched on a need for change in the regulation of gold mines, while his recent suggestion to reinstate the death penalty in the wake of a child rape case smacks of pandering to public outrage. It also serves as a reminder of the risk that Battulga poses to Mongolian foreign policy, which has traditionally balanced relations with China and Russia by embracing democratic ‘third neighbours’ and through active engagement with the UN. It remains unclear what a much more domestically-focused president will mean for Mongolia’s 2022 Security Council bid.

With low expectations of the president and the government, what will happen in policy areas where challenges loom? The fiscal crisis may well be dealt with from the outside through the leverage that an IMF-brokered loan presents.

But what about air pollution? During the winter season, the capital Ulaanbaatar’s air quality is the worst in the world. Winter is coming again, but not much has changed since the last season. Both President Battulga and Prime Minister Khurelsukh repeated statements of the importance of reducing air pollution, as did their predecessors. But neither of these leaders seem to have assessed their predecessors’ air pollution reduction plan.

And corruption? Whether or not it reached new heights under Enkhbold’s leadership or not, corruption appears to be endemic and a massive drain on Mongolia’s development. The giant Oyu Tolgoi mine operated by Rio Tinto may turn out to be a blessing by putting mine revenue mostly out of reach of corrupt officials, unlike the long-operating Erdenet mine and the Tavan Tolgoi coal operations. No senior officials have been investigated and penalised. Rather, the judiciary and law enforcement merely exploited cases as leverage against each other as we have just seen again with the removal of the director of the General Intelligence Agency following accusations over corruption he traded with the new Minister of Justice.

There is also the issue of perpetual personnel rotations in the civil service. Political turmoil would be much less of a challenge if an independent and competent civil service was allowed to blossom. Yet turmoil coupled with a toxic perception of public office as an earnings opportunity prevent the development of regulatory capacity and the implementation of well-intentioned legislation. Even though both parties and influential politicians have been calling for public service reform and autonomy, none have made genuine efforts towards such a goal.

Mongolia seems to have arrived at another crossroads to fix its corrosive political institutions, its parliament and its ruling cabinet. In the absence of ideology, values, principles or any well-outlined strategy, Khurelsukh’s cabinet has already lost some of its momentum. Without a clear strategy on how to fight corruption or strengthen the public service and judiciary, the new prime minister’s words will merely parrot the anti-corruption, pro-justice, and good governance rhetoric of his predecessors.

Julian Dierkes is an Associate Professor and Keidanren Chair in Japanese Research at the Institute of Asian Research, University of British Columbia. Follow him on Twitter @jdierkes.

Mendee Jargalsaikhan is a PhD Candidate at the Department of Political Science, University of British Columbia.