China’s People’s Armed Forces Maritime Militia (PAFMM) is key to understanding Beijing’s grey-zone operations in the South China Sea (SCS). The PAFMM is organised and linked to the People’s Liberation Army chain of command through the People’s Armed Forces Districts. PAFMM members are trained in maritime claims enforcement, logistics support, intelligence, surveillance and reconnaissance and sabotage. Operating about 84 large vessels with reinforced hulls and water cannons, the PAFMM serves as China’s third force in the SCS. 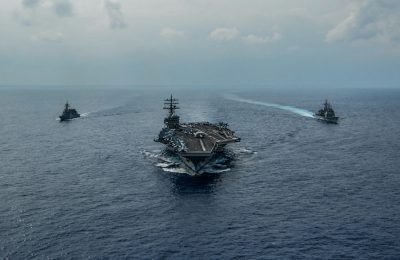 The Philippines currently occupies nine features in the SCS. But through its PAFMM, China can prevent the Philippines from exercising sovereignty within and surrounding these features. Given precedents such as the seizure of the Paracels in 1974 and the occupation of Mischief Reef in 1995, the PAFMM may be employed to seize any of the Philippine-occupied features and to construct artificial islands and facilities on them.

Although the United States has clarified that ‘any armed attack on Philippine forces, aircraft, or public vessels in the SCS will trigger mutual defense obligations’, attacks from the Chinese Coast Guard and the PAFMM might not qualify as armed attacks that warrant US intervention in view of their purported civilian nature.

If the alliance cannot address the security challenge posed by the PAFMM, it might be ineffective in preventing a future fait accompli that could undermine the regional security status quo. Consequently, the PAFMM would weaken the alliance by showcasing US strategic ambiguity and forcing the Philippines to choose quiet diplomacy over deterrence in the SCS.

In addressing the PAFMM challenge, the Philippines may consider unilateral, bilateral and multilateral responses. Unilaterally, the Philippines may enhance the capacity of its National Coast Watch Center in terms of connectivity, interoperability, data aggregation, data visualisation and cross-domain information-sharing among its navy, coast guard and other concerned agencies. It may elevate its satellite partnership with Japan to develop a synthetic aperture radar (SAR)-equipped microsatellite for a more self-reliant approach to maritime domain awareness (MDA) in contrast to its current SAR data-sharing arrangement with the United Kingdom.

The Philippines could establish a maritime command and control centre in the SCS, equipped with coastal surveillance radars and electro-optical sensors on its occupied features for more comprehensive MDA coverage. This initiative would not violate the principle of self-restraint under the 2002 ASEAN–China Declaration on the Code of Conduct of Parties in the SCS.

The Philippines may also fast track the development of the Naval Detachment Oyster Bay in Palawan, which could host a refuelling facility to extend the maritime security operations of its navy and coast guard. Manila could equip its current and future high-endurance patrol vessels with non-kinetic weapons such as water cannons, long-range acoustic devices (LRAD) and active denial systems for a proportional response to PAFMM activities.

Bilaterally, Manila and Washington must seek a shared understanding of how the PAFMM challenge affects Philippine national security and the credibility of US extended deterrence. Given a shared understanding of the PAFMM’s role in China’s ‘people’s war at sea’ and ‘three warfares’ strategy, an MDT review must be geared towards enhancing interoperability and capacity-building rather than constraining future joint responses by terminating the Visiting Forces Agreement.

To sustain capacity-building gains from the previous US administration’s Maritime Security Initiative (MSI), Manila and Washington must ensure that enhancing Philippine MDA will remain a priority under the Indo-Pacific MSI of future US administrations. The Philippines and the United States must also clarify what constitutes armed attacks and SCS red lines during an MDT review, as well as in future Bilateral Strategic Dialogues and Mutual Defense Board–Security Engagement Board Meetings.

Based on the converging points of these red lines, the two countries must define their shared objectives in deterring grey-zone coercion in the SCS and develop applicable rules of engagement for dealing with maritime scenarios involving the PAFMM.

Multilaterally, the Philippines could cooperate with ASEAN member states and ASEAN dialogue partners (like the United States, Japan and Australia) in building a regional consensus on how to prevent unexpected incidents involving maritime militias. This initiative may be pursued through multilateral mechanisms such as the ASEAN Regional Forum Inter-Sessional Meeting on Maritime Security, Expanded ASEAN Maritime Forum, ASEAN Navy Chiefs Meeting and Heads of Asian Coast Guard Agencies Meeting.

Manila may reassert the proposal for ASEAN dialogue partners — including China — to observe the ASEAN Defence Ministers’ Meeting Guidelines for Maritime Interaction and may propose to widen the scope of such guidelines to cover coast guard vessels and maritime militias. The Philippines could also raise security issues relating to maritime militias during the ASEAN–China negotiations for the Code of Conduct of Parties in the SCS.

Through these policy actions, the Philippines can address the PAFMM challenge by enhancing its maritime security capabilities, supporting the Philippines–US alliance as it adapts to the evolving geopolitical environment and strengthening regional cooperation for a rules-based maritime order.

Christian Vicedo is an independent security analyst based in Manila.