India–China relations have hit a nadir after the recent clash between Indian and Chinese troops in the Galwan Valley. Although disengagement and de-escalation is underway, tensions remain high. Some argue that there has been a Chinese and Indian leadership failure in ensuring amicable ties, pointing to ‘a historical failure on both countries’ parts to initiate a Nixonian moment in their relationship’, a reference to the former US president’s promoting pragmatic coexistence with China. 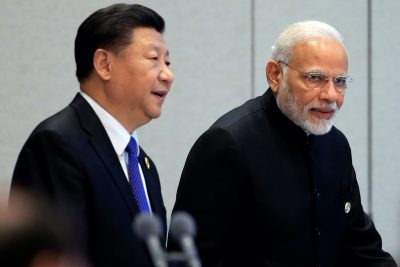 After its establishment in 1949, the People’s Republic of China espoused Marxism-Leninism and consolidated an alliance with the Soviet Union. But bilateral relations hit rock bottom in the 1960s especially after the clash along their disputed border in 1969. It is in this context that the United States (the leading power) and China (the weakest power in the triad) established relations aimed at countering their common enemy, the Soviet Union.

Today, the United States is the hegemon, albeit in decline, and India is the weakest power in a US–China–India triad. China–US relations have gone from bad to worse, especially through the COVID-19 pandemic. On the other hand, India–US relations have blossomed in the 21st century. Political, diplomatic, economic, security and military ties between the world’s two largest democracies have strengthened and deepened.

For its part, India is wary of China’s assertive foreign policy, including attempts to curtail India’s rise as a great power. Beijing wants New Delhi to be enmeshed in South Asian affairs so that India’s political, diplomatic and military resources are not utilised to challenge China’s rise as the predominant power in Asia.

Unlike the India–China and China–USSR dyads, the United States and China are not neighbours. In 1969, at the height of the China–Soviet split the two countries had a seven-month border conflict, which ended in a ceasefire with the status quo ante restored. But the border dispute was not resolved and rivalry between the two countries was extended to countries in Asia, Africa and the Middle East. Bilateral relations only improved, slowly and steadily, in the 1980s.

India fought a limited border war with China in 1962, where the former was defeated and China captured Aksai Chin, a piece of territory claimed by India. The 1962 war exacerbated mistrust and led to the breakup of diplomatic ties between the two countries until 1976. The two countries also had border skirmishes at Nathu La, Sikkim, in 1967, and at Tulung La, Arunachal Pradesh, in 1975. In the 21st century, both have blamed each other for border transgressions along the un-demarcated Line of Actual Control (LAC). Tensions rose again in 2013 and 2014 when India blamed China for encroaching on Indian territory, denied by China. The matter was resolved when both sides withdrew troops.

In 2017, the two countries had a 72-day military standoff in Doklam at the China–Bhutan–India trijunction. There were fears of this spilling over between the two nuclear-armed neighbours. The standoff resolved after both sides withdrew troops and China agreed not to build a road in Doklam.

One explanation for recurrent border transgressions is geopolitical, in attempting to put pressure on India to kowtow to China and show India its place in the Asian hierarchical order. Another is domestic factors, such as Chinese expansionism and rising nationalism, which makes it difficult for leaders to compromise on territorial sovereignty. China is also anxious about India’s construction of roads, bridges, tunnels and other infrastructure along the disputed LAC. China is especially concerned over the construction of the 255-kilometre Darbuk-Shyokh-Daulat Beg Oldie (DS-DBO) all-weather road due to its tactical advantage along the LAC.

Government leadership in both countries is essential for strengthening India-China relations and to avoid clashes like the recent one in the Galwan Valley. But hopes for a ‘Nixon moment’ in India-China relations ignore how the protagonists would be starting off with legacies of historical tensions quite different from those which Richard Nixon was responding to in 1972.