COVID-19 is showing the world how a health crisis can exert disproportionate pressure on existing social and political fissures. The Asia Pacific maritime environment is no exception, with hybrid challenges persisting and non-conventional incidents on the rise. As state budgets adjust to accommodate the health crisis, non-state actors are escalating violence on land that is spilling over into the maritime domain. 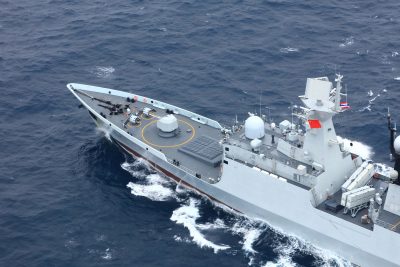 Before the onset of the pandemic, illegal, unreported, and unregulated fishing incidents were gaining recognition as a serious security issue. Known as hybrid challenges, these incidents are characterised by the combination of regular and irregular tactics used by adversaries to exploit non-conventional concerns to gain an asymmetric advantage. These tactics include the use of criminal behaviour, subversion, the sponsorship of proxy forces, and even military expansionism.

COVID-19 is not hindering state and non-state actors from posing maritime hybrid threats despite national budgets being diverted to crisis response. The sinking of a Vietnamese fishing boat near the Paracel Islands, harassment of supply ships off Sarawak, and China’s annual announcement of a fishing ban are some irregular hybrid tactics that persist alongside the global pandemic.

Non-state actors are also exploiting the health crisis and perceived weakening of state capacity to heighten domestic violence, with negative consequences for the Asia Pacific’s maritime domain. Organised violence in Myanmar’s Rakhine and Chin states increased by 74 per cent from January to April 2020 compared to the year before. This increase in violence is causing mounting civilian fatalities, displacing villagers and pushing migrants out to the Andaman Sea — a maritime route into other regional countries. As countries reject migrants for fear of spreading unidentified infections, the exodus under pandemic conditions could trigger a repeat of the 2015 migration crisis.

There has also been a marked increase in piracy and armed robbery incidents during this period. The Regional Cooperation Agreement on Combating Piracy and Armed Robbery against Ships in Asia (ReCAAP) Information Sharing Centre reported a two-fold increase in the number of piracy and armed robbery incidents from January to June 2020 as compared to 2019. Security arrangements such as the Eastern Sabah Security Command were also on high alert after receiving information of a raised risk of armed Abu Sayyaf Group (ASG) members targeting vessels in the Sulu and Sulawesi seas.

The heightened risk of instability at sea is accompanied by related reports of clashes between government forces and militants on land. In Sultan Kudarat province, Philippine government forces targeted Bangsamoro Islamic Freedom Fighters militants that are associated with a kidnap-for-ransom group. Violent clashes with ASG members were also reported in Sulu.

While these maritime challenges demand an immediate security response, Asia Pacific countries are preoccupied with battling COVID-19 infections within their own borders. By redirecting more resources towards containing the spread of COVID-19, regional countries are experiencing corresponding budget cuts to other state functions — including defence. For example, Indonesia’s defence budget has been lowered by seven percent and Thailand’s budget will shrink by eight per cent. For Thailand, this has translated into a standstill on military procurement purchases including two Chinese-made submarines.

Despite these restrained national resources, regional governments are still adopting strategies to compensate for any shortfall in state capacity. To maintain a coordinated and balanced response towards both domestic and external threats, Malaysia is implementing the integrated ‘Ops Benteng’ to enhance enforcement along maritime and land borders. In the Philippines, a controversial anti-terrorism bill designed to strengthen the country’s anti-terrorism authorities came into effect on 18 July. Meanwhile, annual multilateral naval exercises such as the Southeast Asia Cooperation and Training (SEACAT) have shifted to virtual platforms to maintain active levels of information sharing and multilateral coordination among naval forces in the region.

COVID-19 is placing intense pressure on political and social fissures that already exist in the Asia Pacific. Non-state and state actors are taking advantage of a perceived reduction in state capacity to pursue activities that result in maritime instability. An extended pandemic period threatens to exert further pressure on national budgets and state capacity to protect exclusive economic zones. Although COVID-19 began as a threat to public health, it is slowly evolving into a threat to maritime security too.

Dr Asyura Salleh is a Vasey Fellow at Pacific Forum and Special Advisor for Maritime Security at the Yokosuka Council on Asia-Pacific Studies (YCAPS).