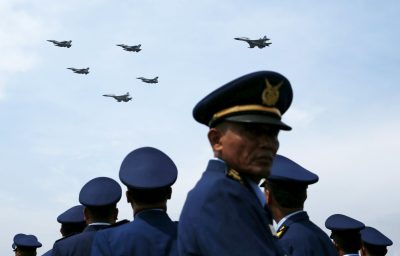 An accompanying Force Structure Plan outlines ‘new and adjusted Australian Defence Force capability investments’ to respond to what the prime minister described as the ‘new and less benign strategic area’ in which Australia finds itself.

That’s not pocket change in the context of the once-in-a generation economic shock wrought by the pandemic. Some commentators in Australia have questioned the safeguarding of military budgets at a time when there is pressing need for spending to support the victims of the recession. Others suggest that the Update merely doubles down on old commitments, refocusing on Australia’s regional backyard as strategic risks in Asia grow.

These questions aside, the Update presents a remarkably frank diagnosis of a deteriorating strategic environment. It also more explicitly states Australia’s intention to shape its strategic environment — and to do so as much as possible in concert with regional allies that are similarly invested, the Update supposes, in the ‘rules-based international order’.

No country looms larger in this regard than Indonesia. It has always figured prominently in Australian defence thinking: in years gone by, as a potential antagonist; more recently, as a potential ally — and, at any time, as a thoroughfare for an attack from an aggressor to Australia’s north.

In this week’s lead article Evan Laksmana provides a reality check for those in Canberra counting on Indonesian policymakers to assimilate Australian anxieties about China and to adapt its policies accordingly.

While the Update’s emphasis on coalition-building in the Indo-Pacific marks it as ‘a preliminary search for non-US alternatives’ in countering Beijing, it still ‘implicitly favours a unipolar regional order where US military dominance underpins regional security in collaboration with allies like Australia and partners like Indonesia’.

‘This’, Laksmana reminds us, ‘is not a vision Indonesia necessarily shares’. And the Strategic Update ‘does a poor job of specifying the shared regional interests that may or may not rally the support of regional countries like Indonesia’ in pushing back against the excesses of Chinese behaviour in Southeast Asia.

To achieve that goal, Australia would need to work harder in regional capitals to make the case that committing more enthusiastically to defend the ‘rules-based order’ is not necessarily to take sides in a zero-sum geopolitical struggle between the United States and China.

That mission of influence is not one for a military: it is the work that diplomats need to do. And in achieving its national security objectives, ‘Australia needs to prioritise diplomacy and development as well as defence in its approach to international engagement’, writes Melissa Conley Tyler in our other lead article this week.

‘Whatever Australia spends’, says Conley Tyler, ‘it will never have the largest military in the region. But it is realistic to have the most effective diplomats promoting Australia’s interests’. Yet funding for Australia’s Department of Foreign Affairs and Trade has dwindled, increasingly dwarfed by the defence budget, and Australia’s diplomatic efforts in the region are dismal and in retreat.

The drawbacks from this under-investment will be felt in Jakarta and other capitals around the region. Australia’s two-way trade with Indonesia is comparatively small. The new Indonesia-Australia Comprehensive Economic Partnership will not take the economic relationship to the next level in the absence of a healthier investment climate in Indonesia and won’t lead to a wholesale re-conception that’s needed of the Indonesia relationship within Australia, especially when both economies are on the ropes amid the COVID-19 pandemic.

Given the state of the economic relationship, government-to-government relations will have to continue to do the heavy lifting in keeping the relationship strong. Australia’s extensive development program has helped it punch above its weight in terms of access and engagement, if not influence, in Jakarta. Despite a recent though less than sure-footed boost in response to the pandemic, Australian aid to Indonesia has fallen significantly in recent years.

More importantly, the presumption of Indonesian complicity in Australia’s defence reset reflects a deeper malady in Australian thinking about its relationship with Indonesia — its instinctive failure to comprehend and to give respect to Indonesia’s independent weight and circumstance, its natural posture of condescension towards its close and most important neighbour.

Ultimately, geopolitical shifts well beyond Australia’s control have given rise to the uncertain strategic environment to which the Defence Strategic Update seeks to respond. Investment in military capability as a hedge against the possibility of future conflict is responsible policy. A more comprehensive national strategy would involve a commitment that optimises the deployment of all policy instruments — diplomatic and economic, as well as military — to safeguard Australia’s national interests abroad. No such comprehensive strategy is evident and certainly none has yet been articulated.

It’s the limitations of Canberra’s national security thinking, reflected in the Defence Strategic Update and highlighted by both Laksmana and Conley Tyler, that remind us why a rigorous domestic debate based on understanding of perspectives in our region about what kind of security Australia needs, and how it should achieve it, is now so indispensable.