Australia launched its 2020 Defence Strategic Update this month to bring defence policy up to speed with the deteriorating strategic environment in the Indo-Pacific, marked by the rapid military modernisation in the region, sharpening US–China strategic competition, and the rise of ’grey-zone’ forms of assertiveness and coercion to achieve strategic goals without provoking conflict. 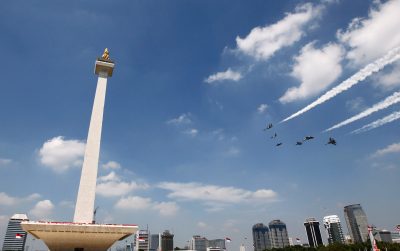 The Strategic Update commits Australia to shaping its strategic environment, deterring actions against its interests and responding with force if necessary. It reorients defence planning to Australia’s immediate region, from the north-eastern Indian Ocean, through Southeast Asia to the South West Pacific.

Australia’s boosting defence capabilities and realigning strategic focus in the face of adverse strategic trends is a perfectly reasonable step. But the focus on Southeast Asia immediately raises the question of where Indonesia fits in. The Strategic Update only mentions Indonesia once alongside Japan and India, whose defence relationships with Australia will be ‘vital to regional security’.

Yet these countries’ prominence pales in comparison to the United States and China, whose strategic competition can be felt throughout the Strategic Update. In short, the document is less ‘Southeast Asia-focused’ and more US-centric and China-driven.

It notes that Australia ‘should be most capable of military cooperation with the United States’ within its immediate region. This is unsurprising given the history and structure of Australia’s alliance with the United States, although one can interpret the Strategic Update as a preliminary search for non-US alternatives.

But when the Strategic Update mentions concerns over military modernisation, grey-zone activities, anti-access and area denial capabilities or coercive practices, it is likely to have China in mind. When it mentions the erosion of the ten-year strategic warning time for a major conventional attack, are there are other regional countries with the capabilities and possible intent to do so other than China?

Unsurprisingly, the document defines US–China strategic competition as ‘the principal driver of strategic dynamics’ in the Indo-Pacific. This means that regional trends and state behaviour are likely to be weighed through the muddy lens of the US–China relationship. Regional countries’ foreign policies or military plans might be judged less in their own respective contexts and more through this superimposed worldview that distorts strategic reality.

This brings into question the considerable under-specification of ‘shared interests’ outlined in the Strategic Update. Assuming that regional countries like Indonesia can understand and support the promotion of broadly defined shared interests works well in the absence of overbearing great power competition. That is not the world we live in today.

The Strategic Update implicitly favours a unipolar regional order where US military dominance underpins regional security in collaboration with allies like Australia and partners like Indonesia. This is not a vision Indonesia necessarily shares.

Indonesia shares the ‘lowest common denominator’ of interests with Australia and the region — stability, security and prosperity. The problem is disagreement over the structure underpinning these goals and the methods used to achieve them. Indonesia disavows alliances and finds great power politics troubling because they lead to regional disunity or unipolarity. Australia will never abandon its alliance with the United States and might even realign its own national interests to hold onto it. Great power politics is acceptable so long as Australia picks a winning side.

Neither Pax Americana nor Pax Sinica is Indonesia’s preferred future for the Indo-Pacific. Yet the Strategic Update does a poor job of specifying the shared regional interests that may or may not rally the support of regional countries like Indonesia.

Given the overwhelming mention of US–China competition and the underwhelming specification of shared interests, Indonesia plays a central but not integral role in the Strategic Update. Indonesia remains central given its strategic geography between the Indian and Pacific Oceans and because of the volatility in its relationship with Australia.

But Indonesia is not Australia’s ‘most important strategic partner’ — by most metrics that would be the United States and Papua New Guinea. Nor is it clear how integral Indonesia is to Australia’s defence planning as a comrade-in-arms, rather than a potential spoiler. Australian strategic thinkers have until recently clung on to the assumption that the ‘threat [to Australia] comes from or through Indonesia’.

Indonesia has not and will not contemplate joint combat operations with any country against a third party. The Strategic Update, while briefed to Indonesian defence policymakers, is in this sense unlikely to radically change Indonesia’s defence planning.

Under Indonesian Minister of Defence Prabowo Subianto, the defence establishment has been locked into a ‘shopping list’ approach to military procurement by purchasing major weapons and assets as soon as possible to ensure the government ‘completes’ its Minimum Essential Force blueprint by 2024. Indonesia’s foreign policy will continue to waver from calling out China as its biggest strategic challenge — nor will it embrace US overtures under a feeble and unreliable Trump administration.

But in the meantime, closer and more institutionalised security cooperation, from joint activities to joint education and training in the areas of maritime security, counterterrorism and dozens of others remain robust. Indonesia–Australia military-to-military ties are perhaps at their strongest level in years.

Economic cooperation is also entering a new phase with the Indonesia–Australia Comprehensive Economic Partnership Agreement (IA-CEPA) coming into effect. The big question down the line is — what happens when their bilateral goals and interests are misaligned with the broader regional order?

Evan Laksmana is a senior researcher at the Centre for Strategic and International Studies (CSIS) Indonesia.