Tensions on the Korean Peninsula ratcheted up on 16 June when North Korea blew up the Inter-Korean Liaison Office building in the North Korean border city of Kaesong. This is a big blow to South Korean President Moon Jae-in’s efforts to engage North Korea, pursue denuclearisation and establish a permanent peace treaty to succeed the 1953 Korean War Armistice Agreement. The timing is ironic considering that the Moon government recently won a decisive election in April positioning it to double down on its engagement policy. 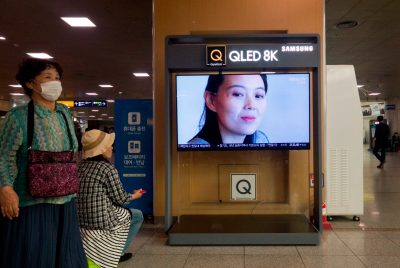 The Inter-Korean Liaison Office was only recently established as part of the Panmunjom Declaration signed between Moon and North Korean leader Kim Jong-un in April 2018. It served as the de facto embassy and a critical channel of communication — away from the militarised setting of the Joint Security Area near Panmunjom — between the two countries that both assert in their constitutions to be the sole legitimate government of the entire Korean Peninsula.

Kim Yo-jong, seemingly acting as a regent for her elder brother Kim Jong-un, released a series of statements over June. She complained about the release of balloons from the South into the North by defectors and activists that contained leaflets criticising the North’s nuclear program and urging regime change. She blamed the Moon government for failing to stop these leaflets as violating its promise to discontinue hostile acts under the Panmunjom Declaration. And she forewarned of her order to destroy the Inter-Korean Liaison Office.

The focus on retribution for the distribution of the leaflets obscures the bigger picture of the North manufacturing another crisis.

One reason for the North’s hostility may be its own domestic situation. Kim Jong-un has been out of the public eye for much of the year. It has been speculated that his prolonged absences are the result of an ongoing health issue, perhaps gout or a heart condition. With his own children too young to stand in for him, his close and trusted younger sister has stepped up with something to prove.

Kim Yo-jong’s leadership credentials are a work in progress. She has been in charge of the country’s propaganda department since 2014 and was promoted to be First Vice Director of the United Front Department of the Workers’ Party of Korea in 2019. But she has no military experience or rank.

The demolition of the Inter-Korean Liaison Office might have been designed to show her teeth among the country’s military in the same way it has been alleged that Kim Jong-un ordered the sinking of the Cheonan South Korean naval vessel and the shelling of Yeonpyeong Island in 2010 to bolster his military credentials. Tensions with the South might also have been designed to divert the North Korean public’s attention away from the spread of COVID-19 in the country, as suggested by Japanese Defense Minister Taro Kono.

Economic considerations are another possible motivation. Kim Jong-un has pursued the so-called byungjin line of parallel development of nuclear weapons and the economy. Having declared the development of his nuclear capability complete, Kim needs to achieve progress on the economic front. But, as Scott Snyder explains in our first feature article this week, Kim’s ‘2018 diplomatic summitry and charm offensive failed to unblock monetary flows from South Korea’. North Korea’s continued economic woes under sanctions are further compounded by the stricter border closures under COVID-19.

While the Moon government is keen to establish joint economic projects as a means of facilitating engagement, it has refrained from any projects violating sanctions. Moon’s engagement ambitions lie idle, awaiting progress in denuclearisation negotiations between North Korea and the United States. With the breakdown of US–DPRK negotiations after the failed Trump–Kim Hanoi summit in February 2019, and with the Trump administration distracted by serious domestic woes, ‘North Korea’s slogan appears to be no cash flow, no peace — and certainly no denuclearisation’, argues Snyder.

A third possible motivation is North Korea’s objectives vis-a-vis the US–South Korea alliance. As Evans Revere argues in our other feature article this week, there is a serious disconnect between ‘Seoul’s starry-eyed vision of reconciliation’ and North Korea’s pursuit of reunification on its own terms, rather than from a position of weakness.

Reports in May that the Trump administration is considering America’s first nuclear test since 1992 could have further incentivised North Korea to stoke tensions and recapture US attention. For North Korea, says Revere, ‘driving a wedge between Seoul and Washington is essential to its goal of undermining the basis for the alliance and the US military presence in South Korea’. This could be said whether North Korea is still harbouring long-term intentions of a forceful takeover of the South, or whether it is simply trying to maintain regime survival against the South’s overwhelming economic and conventional military superiority. North Korea may be hoping that destabilising the US–South Korea alliance unity might eventually open the door to joint North–South economic projects blocked by US sanctions if not a more favourable military balance for the North on the Peninsula.

The Trump administration’s demand for exorbitant increases in South Korean payments for cost-sharing US troops based in the country means Seoul is already working overtime to manage the alliance. Snyder concludes that ‘North Korea’s apparent resolve to renew tensions’ should be grasped as ‘a political opportunity for South Korea and the United States to shelve friction over cost-sharing and reaffirm the strength of their alliance’ and recover the pre-2018 deterrence posture.

Establishing a regime for permanent peace on the Peninsula will require rigorous deterrence coupled with deft diplomacy and engagement. The United States and South Korea must together clearly signal to North Korea that the pathway to removing sanctions can only be achieved via denuclearisation while also providing iron-clad security guarantees for the North’s post-denuclearisation future.