Sadly, explosively and inevitably, North–South Korean dialogue, cooperation and reconciliation have come to a crashing halt. South Korean President Moon Jae-in’s signature policy initiative designed to improve relations with North Korea went up in a cloud of smoke last week after Pyongyang destroyed the Inter-Korean Joint Liaison Office — a central symbol of North–South cooperation. Moon’s policy is a victim of the clash between Seoul’s starry-eyed vision of reconciliation and North Korea’s cold-blooded pursuit of domination over the South. 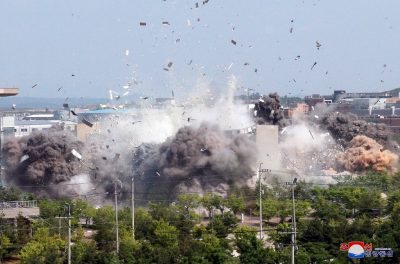 Ties between Seoul and Pyongyang have been deteriorating steadily since the collapse of the Hanoi summit between US President Donald Trump and North Korean leader Kim Jong-un in February 2019. Kim left that meeting angry, having failed to secure an easing of sanctions. Much of Kim’s ire has been directed towards South Korea, since the North Korean leader may have been told that Seoul had paved the way with Washington for a successful outcome in Hanoi. That ire has only grown as international sanctions and the effects of COVID-19 on the North’s economy have intensified.

As North Korea’s economy has deteriorated, Pyongyang has criticised Seoul for not delivering on promises and for being a ‘lackey’ of Washington. Pyongyang has rejected President Moon’s self-proclaimed role as intermediary, facilitator and peacemaker — a role the North sees as anathema to its vision of North–South relations.

That vision was detailed in a remarkable speech by Kim Jong-un on 1 January 2018 in which he proposed direct dialogue with Seoul and North Korean participation in the Winter Olympics. Kim made the case for a dramatic reconciliation between North and South Korea. Appealing to pan-Korean nationalism and ‘blood ties’ between the two Koreas, Kim declared that the ultimate goal of North–South dialogue should be ‘independent’ and ‘national’ reunification ‘by our nation itself’.

Pyongyang was surely also encouraged by President Moon’s statement in January of this year that there was a ‘desperate need’ to engage Pyongyang. After the South’s parliamentary elections in April, Moon and his advisers seemed eager to press forward with North–South cooperation on multiple fronts.

North Korea has seized this opportunity and adopted a new policy aimed both at Seoul and, ultimately, the United States.

When Seoul agreed to Pyongyang’s demand to stop defector organisations from sending anti-North Korea balloons across the border, the North responded by threatening more elements of the relationship, hoping that more pressure would yield more concessions. From the North’s perspective, since the relationship with Seoul has yielded nothing, there is little risk to this strategy, especially if the South is prepared to bend over backwards to maintain ties. But with virtually every North–South connection now suspended, the two Koreas seem headed for a dark period in their relations.

As Kim Jong-un suggested in his 2018 speech, Pyongyang’s major targets are the US–South Korea alliance and Washington’s ability to block the South from offering concessions and expanding relations with Pyongyang. For North Korea, driving a wedge between Seoul and Washington is essential to its goal of undermining the basis for the alliance and the US military presence in South Korea. In this regard, North Korea is no doubt pleased some in the South are blaming the United States for the current situation, arguing that Washington has been preventing Seoul from doing more with the North.

In the coming weeks, we can expect Pyongyang to keep up the pressure on the South. Tactical military provocations designed to test the South’s will and readiness are possible. Although South Korea has criticised North Korea’s actions, there are powerful voices in the South arguing for a concessionary approach to Pyongyang. Kim Jong-un’s announced ‘suspension’ of military measures against the South may be an attempt to appeal to this audience by presenting a ‘reasonable’ face. At a minimum, it gives Seoul an interval to decide what concessions might satisfy Pyongyang and reminds the South that any ‘suspension’ can be easily reversed at the North Korean leader’s whim.

Although we cannot rule out the possibility that Pyongyang will seek to test US resolve — perhaps by demonstrating a new missile or nuclear capability — North Korea probably regards Seoul as a softer target. Nevertheless, with a US president in office who has been prepared to look the other way as North Korea improves its nuclear weapons and ballistic missile arsenal, at some point Pyongyang may explore how far it can go in challenging Washington.

Evans JR Revere is a non-resident senior fellow at the Center for East Asia Policy Studies, the Brookings Institution. He is a former US principal deputy assistant secretary of state for East Asian and Pacific affairs.