In the tell-all memoir released in part this week by John Bolton, the former US national security adviser alleges that President Donald Trump has spent the past four years using the China relationship for his own electoral purposes. 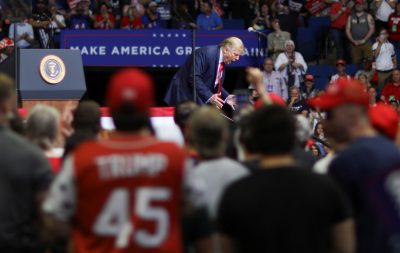 Bolton describes a president who implored Chinese President Xi Jinping to buy up American agricultural products as a way to boost Trump’s electoral fortunes in key states and with special interest groups. He also documents wild shifts in Trump’s stance on China, with the president at times endorsing human rights abuses in Xinjiang as a way to ‘curry favour’ with Xi, and later deploying harsh anti-China rhetoric as a way to deflect criticism for his own missteps in handling the COVID-19 pandemic.

As Daniel Sneider explains in the first of our lead essays this week, ‘[t]he President’s approach to China is dictated, as is everything he does, by the perceived short-term benefit to his re-election’. The result is a highly erratic US approach, in which Trump’s personal ambition — rather than any coherent strategy — has defined the management of this most important of US relationships.

Trump’s own inconsistent views on China are nested within the wider spectrum of his administration. Sneider suggests that spectrum ranges from an inner circle of ‘hardcore ideologues’, who are wholly disinterested in engagement and see China as a totalitarian communist state ‘bent on global domination’, to the broader US foreign policy community and trade professionals who acknowledge that ‘the United States has entered an era of strategic rivalry with China’.

Managing the relationship with China was always going to be a challenge. The emergence of a justifiably ambitious power requires the United States to confront the question of how much room it can afford to give China to put its own imprint on an order largely bequeathed by the United States and its allies.

Grappling with such a fundamental question was never a priority for the self-absorbed Trump presidency.

But this question would have posed a challenge for any US government, in part because of ‘the lingering temptation in the US policy community to understand China through the prism of American exceptionalism’, suggests James Curran in another of our lead essays this week.

American belief in the unique virtue, but also universal applicability, of the country’s national values and institutions has helped to underpin what successive US governments have seen as their legitimate position atop the hierarchy of the global order, Rosemary Foot explains.

Such a view makes it difficult for the United States to imagine that other states — including those with different values — might play such a leading role. It has also set the United States up for frequent disappointment that China — a country with its own strong strand of exceptionalist thinking — has not sought to emulate all US institutions and values.

This tendency in American exceptionalist thinking was highlighted in the May speech by US deputy national security adviser, Matt Pottinger. Pottinger’s speech drew a straight line from the student demonstrators who initiated China’s 1919 May Fourth Movement to Catholic priests who ‘refused to subordinate God to the Communist Party and the millions of Hong Kong citizens who peacefully demonstrated the rule of law last year’, Curran notes.

Pottinger’s framing lends credence to those within the Chinese Communist Party who believe that the United States is both bent on regime change and determined to reshape China in its own political image. Whether or not that is the US goal, it undermines US efforts to develop even a modicum of trust with Beijing, or a workable China strategy that would allow the two states to manage differences peaceably.

Beyond the US–China relationship, US allies have been left reeling by the strange layering of the Trump presidency on top of deeper strands of US foreign policy exceptionalism.

Across Asia and Europe, US allies have struggled to calibrate policies that simultaneously acknowledge areas of tension in their relationships with China but avoid the kinds of hardline US positions that would result in costly wholesale decoupling and containment of China.

The European Union has swung wildly from rejecting ideas of ‘uniting’ with the US in a trade war against China, to proposing an EU–US dialogue to deal with China’s ‘growing assertiveness’.

Australia, too, exemplifies the difficulty of striking this balance, as its clumsy initial proposal for an international inquiry into the origins of the COVID-19 pandemic recently showed.

In Australian Foreign Minister Marise Payne’s recent lengthy tributes to the virtues of the multilateral order, we can read the Australian government’s deep concerns about US retreat from the order and China’s growing influence within it though little understanding that working actively within that order and protecting it is essential to whatever leverage Australia might have in global affairs.

That US allies are discomforted by the Trump administration’s approach to China is befuddling to Washington. Rather than understanding that allies might see the world in ways that are different from the United States, American exceptionalism instead lends some in Washington to paraphrase that misguided Cold War question: ‘who lost Australia?’

These dynamics are being keenly watched in Beijing, where Chinese officials reportedly welcome the re-election of Donald Trump precisely because his administration is jeopardising US relationships with its allies. Those Chinese views, however, also underscore Beijing’s inability to recognise that a ‘loss’ for the United States does not translate automatically into a win for China.

As Curran reminds us, allies like Australia are not yet lost and do not want to be lost. The question then is whether the Trump presidency, and the US policy establishment more generally, can reconcile a US consensus on China with policy interests in Tokyo, Canberra, Brussels and Berlin.