As the COVID-19 pandemic progresses, countries are investing in strategic narratives to tell the world their version of the crisis and present themselves as safe, efficient and reliable actors. South Korea and Japan — two early victims of the virus — are no exception to this trend. Yet their efforts to broadcast the success of their approaches in managing COVID-19 are succumbing to both countries’ tendency to draw direct critical comparisons with one another. 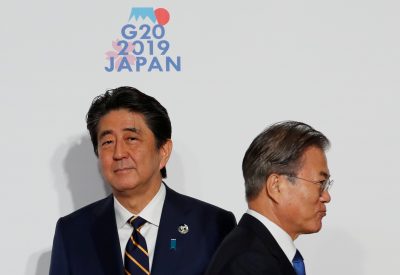 Both are aware that a country’s ability to handle the outbreak and bring cases down has critical consequences for its international image. The United Kingdom is suffering from widespread criticism in the global media for complacency and incompetence. For China, the outbreak in Wuhan was a reputational threat now being addressed through an aggressive domestic and international propaganda campaign.

Japan and South Korea have been competing over their global image for decades. When the COVID-19 outbreak began, they were still locked in a trade war that sparked last year over legacies of colonialism and wartime atrocities. In early April, Japan banned visa-free entry for South Korean travellers. Seoul criticised this decision and retaliated with a reciprocal entry ban.

As the largest democracy so far to reduce the scale of its outbreak by more than 90 per cent from its peak, South Korea has since secured global recognition for its exemplary approach and is now seeking to capitalise on its success for promotional purposes. Remarkably high testing rates and the application of contact tracing technology — derided by Japan as an invasion of privacy — were rolled out early in South Korea. This allowed the swift containment of new outbreak clusters while maintaining less strict social distancing measures than many other states have had to employ.

South Korea’s highly centralised strategy — shaped by its past experiences with SARS and MERS — has been dubbed ‘K-Quarantine’ by government officials keen to export the model ‘into new markets’ to ‘promote national status’.

South Korea is also presenting its response as a liberal democratic alternative to China’s authoritarian COVID-19 approach. This aligns with South Korea’s narrative emphasis on its liberal policies, its exemplary development model, and its contribution to resolving global problems. It simultaneously downplays sources of domestic strife such as the 2014 Sewol Ferry disaster and the scandal-ridden Park Geun-hye presidency — not to mention the ever-present problem of its northern neighbour.

South Korea’s efforts to become a model liberal democracy in East Asia are not new. Rising consciousness of the need for coordinated responses to global problems — such as climate change and refugee flows — is creating new opportunities to win the esteem of others by being seen to contribute to model solutions. For advocates of this approach, ‘good countries’ hold moral authority by contributing to the liberal world order, founded upon the (albeit often contradictory) principles of the common good and consumer power.

South Korea is keen to be seen as a ‘good country’. While it lagged behind Japan for decades both economically and reputationally, it is narrowing the gap and seeks to position itself as the global standard amid the COVID-19 crisis. Although South Korea received criticism early in the outbreak for its decision to leave the border with China open, the Moon Jae-in government has since promoted the success of its transparent, efficient and democratic approach — including through vocal praise of its citizens’ efforts and sense of national sacrifice.

Meanwhile, Japan has provided inconsistent accounts of its health situation, initially intent on maintaining the Tokyo Olympics, originally scheduled for June 2020, for longer than many thought acceptable. Its own citizens complained with unusual derision about Prime Minister Shinzo Abe’s lack of action to increase testing and his misplaced plan to send just two poorly-made masks to each household. The government subsequently unveiled a US$22 million relief package to ‘dispel negative perceptions of Japan related to infectious diseases’ and to help monitor and manage Japan’s image abroad.

Japan’s initial prioritisation of its image by aiming to host the Olympics — instead of implementing adequate measures to fight COVID-19 — backfired by making the Abe government appear irresponsible. Japan’s image, particularly in Northeast Asia, is still recovering from the reputational impact suffered after the Fukushima earthquake and nuclear disaster of 2011. The Abe government is accused of covering up inadequacies in its response and overestimating the success of radiation decontamination efforts in affected areas. South Korea’s Olympic team even broadcasted its intention to bring its own food to the Tokyo Games so its athletes would not have to eat Japanese produce from the Fukushima region.

As the pandemic continues, each new development in the story seems to provide opportunities for these rivals to pit themselves against one another. Most recently, Japan accused South Korea of complacency over the emergence of a new COVID-19 cluster in Seoul’s Itaewon nightlife hub after social distancing measures were relaxed.

The region and the world have more to gain from Japan and South Korea working cooperatively to maximise their exemplary capacity for innovation and high-tech solutions, rather than working against one another. But this will only be possible if the political will exists to re-orient their image-management strategies away from constant competition and one-upmanship.

Sarah A Son is a Lecturer (Assistant Professor) in Korean Studies at the School of East Asian Studies, The University of Sheffield.