According to the Indonesian Maritime Security Agency, in late December 2019, 63 Chinese fishing boats escorted by two Chinese Coast Guard vessels entered Indonesia’s claimed Exclusive Economic Zone (EEZ) in the south central part of the South China Sea. Indonesia protested vehemently, sending warships and jet fighters to the area. Some analysts are predicting that Indonesia, Malaysia, Vietnam and maybe even the Philippines will form a united front that actively opposes China’s claims in the South China Sea. 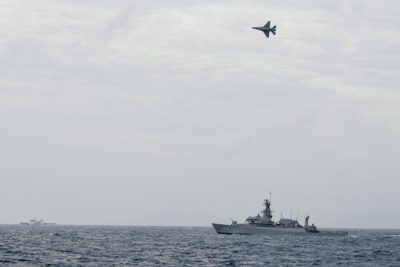 Indeed, some see China’s incursion into Indonesia’s EEZ as a turning point in Southeast Asia–China relations. But this is hyperbole.

At the 53rd ASEAN Foreign Ministers’ Meeting in January, the most that could be mustered regarding the South China Sea was trite concern about ‘land reclamations, recent developments and serious incidents eroding trust and confidence, increasing tensions and possibly undermining regional stability’. The ASEAN Chairman, Vietnamese Foreign Minister Pham Binh Minh, also reaffirmed the importance of all countries respecting the UN Convention on the Law of the Sea — but he did not explicitly mention China. While this language may be considered progress in ASEAN-speak, it was hardly a robust expression of united opposition against China’s actions.

There are good reasons why an anti-China front within ASEAN is unlikely to materialise. These nations all want China’s continued economic largesse and have political and military reasons for not wanting to fall out of favour with China.

Indonesia does not want this tiff to escalate. In 2016, one of its Navy vessels fired at a Chinese fishing vessel in Indonesia’s claimed EEZ. This time, Naval and Coast Guard vessels as well as Air Force aircraft were deployed but their actions were restrained and no weapons were discharged. Indonesia’s Defense Minister Prabowo Subianto emphasised that ‘China is a friendly nation’. Coordinating Minister for Maritime Affairs and Investment Luhut Pandjaitan echoed Prabowo, saying ‘Indonesia and China should not quarrel’.

Indonesia’s principal security concern is internal stability. China provides significant economic assistance and investment that is important to this end. So Indonesia has balanced mollifying its nationalist anti-China elements and persuading China to remove its vessels from Indonesia’s EEZ, at least temporarily. It has preserved its national interests without endangering its Chinese investment or providing sufficient fodder for its domestic anti-China nationalists. Unless China loses patience and does something foolish to upset the relations applecart, Indonesia is unlikely to abandon this ‘delicate equilibrium’.

China has also been fishing in Malaysia’s EEZ and allegedly intimidating fishers and other nationally sanctioned actors there. But as former Malaysian Prime Minister Mahathir Mohamad said, Malaysia is simply ‘too small to face up to China’, so instead ‘we watch what they are doing, we report what they are doing, but we do not chase them away or try to be aggressive’. China and Malaysia have agreed to a joint dialogue mechanism for the South China Sea. Also, forgoing a united front with Vietnam against China regarding their joint claim to continental shelf, Malaysia has proceeded unilaterally with exploration there — much to Vietnam’s dismay.

There were also flare-ups between the Philippines and China regarding what the Philippines claims is Chinese illegal fishing and intimidation of Filipino fishermen in the Philippines’ claimed EEZ. There has also been conflict over the exploration of petroleum resources there.

But the Philippines will not join a ‘front’ of smaller Southeast Asian nations against China’s South China Sea intimidations. It has made its own political accommodations with China with promises of more Chinese investment and joint development of petroleum resources. Now there are also talks between their Coast Guards that could reduce incidents and tensions at sea.

China recognises that its relationship with the Philippines regarding the South China Sea is being watched carefully by the other claimants and it is trying to make it a ‘showcase of its peaceful dispute management and good neighbour policy’.

Vietnam has been very aggressive in its response to what it sees as China’s illegal incursions into its claimed maritime zones, although it has not recently used its Navy or Air Force to confront China’s vessels. While Vietnam will use a tit-for-tat strategy to defend its perceived rights, it is rightfully wary of pushing China too far.

China will likely make good use of these individual economic and political needs to prevent unity against it. But China is already making some adjustments in its policy and actions to partially and temporarily accommodate their concerns. China admits that its fishermen had taken fish from waters claimed by Indonesia and that they had pushed its government to allow them to do so. And China has now ordered its fishing boats to at least temporarily leave Indonesia’s claimed EEZ.

But this does not mean that China will completely surrender its claims. China thinks long term. These temporary adjustments give hope that this dispute can be resolved. Such hope, coupled with China’s growing military and economic power and the pragmatic realisation that its looming regional presence is long-term, will prevent oppositional unity.

This recent China–Indonesia incident is a blip in the overall long-term mutual adjustment in China–Southeast Asia relations to accommodate China’s rise. The anti-China bandwagoners hoping for it to be a turning point in uniting Southeast Asian opposition to China in the South China Sea will be disappointed.

A version of this article originally appeared here on ASEAN Today.