The India–Australia strategic partnership has grown quite rapidly over the last few years. This is impressive considering how indifferent New Delhi and Canberra were towards each other a decade ago. The change in the tone and direction of the relationship over the past decade is driven by shared concerns about China’s rise and its strategic implications for the Asia Pacific order. 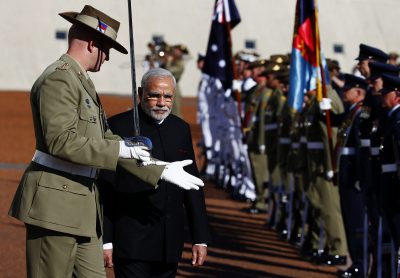 Despite the number of high-level political visits and military exchanges, such as the 2+2 Dialogue, there still remains scepticism about the relationship. Many believe that the shared concerns of both countries have not yet translated into a shared policy approach. Frederic Grare raised this point in 2014, but six years later India and Australia remain unable to forge a coherent strategy or a common policy approach to China.

There has traditionally been some wariness among Australian security analysts about the India–Australia relationship, and vice-versa. But as the threat from China grows, New Delhi and Canberra should find more innovative ways to work together to shape a stable Asian strategic order. The two already work together in larger strategic formulations such as the Quadrilateral Security Dialogue (the Quad).

A new wrinkle in the relationship is the Modi government’s identity politics. Many argue that India’s recent internal developments go against the grain of its strategic partnerships — based on shared liberal democratic values.

Whether mutual concerns about China are serious enough to offset worries about the unhelpful direction of India’s internal politics and nurture the budding India–Australia strategic partnership remains to be seen.

Australian officials are very positive about the direction of relations. At the fourth Raisina Dialogue in January 2019, Australian Foreign Minister Marise Payne noted that as ‘competition intensifies, Australia and India have shared interests in ensuring the peaceful development of an open, inclusive and prosperous Indo‑Pacific region — a region in which the rights of all states are respected, large and small’.

The signing of a Framework for Security Cooperation between India and Australia in 2014 by Prime Ministers Narendra Modi and then-prime minister Tony Abbott still provides the much-needed impetus for greater security engagement between the two countries.

The two countries are currently finalising a mutual logistics support agreement, an information exchange agreement and a broader maritime agreement. These are expected to increase military interoperability and help ‘elevate’ the strategic partnership.

There remain areas that need greater clarity. One of the problems with the India–Australia relationship is that both countries have a different set of concerns about China. Australian concerns have to do with China’s increased activities in the Pacific, while India is concerned about China’s greater presence and influence in the Indian Ocean. India has also been uncertain about Australia’s reliance since Canberra backed out of the Quad in 2007, though this uncertainty is slowly disappearing. It is equally likely that Canberra has a certain lack of confidence given that New Delhi seems ambiguous about whether to balance or hedge. These differences might partly have to do with strategic histories. Australia has long been an American ally, while India remains uncomfortable about alliances.

This need not be an impediment to the strategic relationship if the two countries are able to forge their partnership based on some key principles, norms and ideals. Both countries should champion the rule of law, a rules-based order, respect for human rights and norms of responsible behaviour.

The joint naval exercise AUSINDEX (which began in 2015) reflects the convergence of Indian and Australian approaches to maritime and regional security. The two countries conducted the third edition of AUSINDEX in April 2019. The exercise was reported to have been the biggest in terms of the scale of participation from both navies.

The second issue with the relationship is the deficit of military capabilities, especially on the Indian side. While the two militaries have been able to showcase their prowess during exercises, their ability to come to each other’s aid during conflict remains in question. The joint logistics services agreement would go a long way in addressing this issue as it would provide joint access to each other’s military facilities.

Third, there is a need for greater agreement among the Quad member states about burden-sharing. A discussion about the operational aspects of their cooperation would create greater synergy between their forces when dealing with common problems.

From an Australian perspective, the fourth and final irritant in the relationship is India’s reluctance to involve Australia in the Malabar trilateral naval exercise alongside the other three Quad nations — India, Japan and the United States. Indian media reports indicate that India might be open to involving Australia at the next Malabar naval exercises scheduled to take place later in the summer.

Indian reluctance to involve Australia in the Malabar exercise has not produced significant negativity towards India, especially given the progress in bilateral relations more broadly. But if India thinks Australia is a legitimate security partner, it must expand the trilateral to include Australia as well. The fact that Australia is included in other bilateral and multinational military exercises should not be an excuse.

The India–Australia strategic partnership has seen impressive advancements in the last few years, but its potential and promise are yet to be fully realised. It will require dedicated attention and political leadership from both capitals to become more than a work in progress going forward.

Rajeswari Pillai Rajagopalan is Distinguished Fellow and Head of the Nuclear and Space Policy Initiative at the Observer Research Foundation, New Delhi.