France’s recently launched Indo-Pacific strategy has attracted many critical and sarcastic comments. Some Western analysts picture France’s move as a desperate (and vain) attempt to regain its past grandeur and most of them consider the strategy doomed to fail, while Chinese commentators criticise France for following in US footsteps to contain China’s rise. 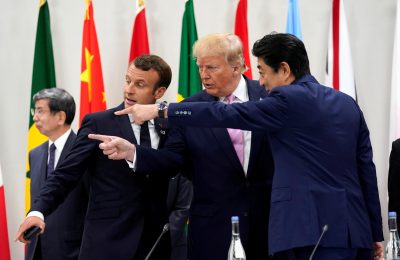 France’s interest in what is now called the ‘Indo-Pacific’ region is nothing new. In 2008, the French White Paper on Defense and National Security pointed out that France should look beyond West Africa to the entire Indian Ocean and East Asia region. Five years later, the following edition emphasised again that the Indian Ocean, as the passageway between Europe and Asia, is becoming increasingly prominent and that France should seize opportunities that may emerge in this region.

France is a resident Indo-Pacific power. With territories in both oceans, France has 1.6 million citizens and many businesses in the region. Over 90 per cent of France’s Exclusive Economic Zone — also the world’s largest — is located in the Indian or Pacific oceans. French interests in this part of the world are significant.

The notion of the ‘Indo-Pacific’, however, is a new one. It was first championed by the French Navy and has now also been adopted in French diplomacy. French President Emmanuel Macron made a speech at Garden Island in Australia in May 2018 in which he referred very explicitly to an Indo-Pacific strategy. He then described his regional ambition in Asia in a speech to French ambassadors in late August 2018. More than a mere change in terminology, this reflects a new and more comprehensive vision of the Indo-Pacific.

What triggered the change in terminology and gave renewed momentum to France’s interest in the Indo-Pacific region is undoubtedly the rise of China and its increasing assertiveness which is perceived by many as a threat to multilateralism and the international rules-based order.

At the 2019 Shangri-La Dialogue, French Minister of Defense Florence Parly delivered the new version of the French defence policy in the Indo-Pacific, stressing the need to develop useful links and joint actions for shared security. It is with this objective in mind that the French Navy exercises its freedom of navigation through transit in the South China Sea.

In the defence sphere, the French strategy is based on strategic partnerships and arms agreements with countries such as India, Australia, Japan, Malaysia and Singapore. The objective is both to defend French territories and a rules-based order.

The Indo-Pacific strategy is not exclusively a military one. A companion document to the defence paper, issued by the French Ministry of Foreign Affairs, further describes the Indo-Pacific as a crucial region. It is the centre of global economic activities and of most trading routes, but it is also significant in terms of climate change and biodiversity because of its economic and demographic weight and its wealth of natural resources, including energy.

France’s priority is a stable, multipolar order based on the rule of law, the free movement of people and goods and fair and efficient multilateralism. The Indo-Pacific region is at the heart of this strategy. The objective of its Indo-Pacific strategy is manifold, protecting first the country’s interests in the region, but also global common goods and values through cooperation with like-minded countries.

As a result, the French Indo-Pacific strategy is a comprehensive one based on multilateralism and on military, economic and diplomatic cooperation with various countries and institutions in the region — in particular Australia, India, Japan and ASEAN. Such cooperation is to a large extent already in place, but the point is to make it deeper, better structured and more systematic.

The problem with the term ‘Indo-Pacific’ is that it is used by many actors in the region but with different definitions and different objectives in mind — quite naturally given the diversity in interests — in particular with respect to China.

In this regard the French vision is probably closer to the Indian and Australian visions than to the Japanese one, although the latter has evolved over time to be more cooperative with China. The inclusive vision of the Indo-Pacific region championed by France is also in line with the vision promoted by ASEAN, which refuses to engage in a confrontational approach to China.

France’s Indo-Pacific strategy departs substantially from the US strategy, which tends to be both confrontational and over-militarised. As in the case of the recent trade conflict, France may agree with the United States on the reality of the threat coming from China, but certainly not on the responses that the United States has given.

As a country with substantial interests in the Indo-Pacific region — widely defined — France should not be excluded from the conversation, and its strategy, although still work in progress, could no doubt bring an original contribution to the security and stability of the region.

Françoise Nicolas is Director and Senior Research Fellow of the Center for Asian Studies, the French Institute of International Relations (IFRI), Paris.