In January 2019, South Korea’s Hanjin Heavy Industries and Construction closed down its shipbuilding operations in the Philippines. Hanjin represented the single biggest case of foreign investment in the country when it entered in 2006. Its ship exports have helped put the Philippines on the map as the world’s fifth-largest shipbuilding country. The Hanjin shipyard alone sits on a 300 hectare area of Subic that was the United States’ biggest naval base in the Western Pacific before it became a free-port zone in 1992. At its peak, Hanjin employed a 33,000-strong workforce. 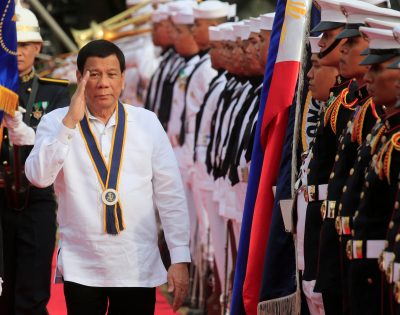 The closure of the South Korean shipyard raises the question for the Duterte government of what to do with the remaining 3,000 workers who lost their jobs. The company currently also owes creditors a total of US$1.3 billion (of which US$400 million is owed to five Philippine banks).

The latter amount is not enough to dent the Philippine banking system, let alone the national economy, but the impact on the shipbuilding industry and the local community is significant. The search for new investors — a white knight — is under way, with reported interest from three Chinese corporations and possibly Filipino, Japanese, Korean, Turkish, US and European players.

The possibility of a single Chinese investor taking over the shipyard looms. Both China and the Philippines are interested in cementing investment cooperation, while China has considerable capacity and experience as the world’s top shipbuilder. Bureaucrats and creditors would likely prefer such a simple and quick solution.

On the one hand, a new investor could help save the industry, provide jobs for the displaced workers, help pay off the creditors and continue to transfer maritime industry-related skills and technology considered indispensable to the Philippines. On the other hand, the Philippines does not tend to see China as an ordinary investor, due to persisting territorial disputes and mistrust of Beijing’s strategic intentions.

Meanwhile, the Philippine Navy has been actively lobbying to take over at least part of the facilities, with both Defence Secretary Delfin Lorenzana and the President indicating that they are willing to look at this option. The arguments put forward by the navy and its supporters appear to be based on three points.

First, the Philippines, as an archipelagic state and maritime nation, needs to further develop its shipbuilding and repair capabilities. This would be in line with the Philippines’ existing efforts to beef up external defence, promote maritime security and protect its vast marine resources. The navy has already started acquiring new vessels and plans to build over 30 boats in the next 5–10 years.

Other institutions which stand to benefit from an upscale facility servicing the public maritime sector’s needs include the Coast Guard (which is tasked with securing the country’s 36,000 kilometre coastline), the fisheries bureau and other maritime authorities that perform law enforcement functions in waters surrounding the 7,500 islands that make up the Philippines.

A public–private partnership may be the way forward, since taking a direct hand in running an enterprise would contradict the government’s philosophy of privatisation. Moreover, the military establishment has neither the capability nor the desire to run a shipyard.

The second reason in favour of the navy assuming control over the shipyard is the lack of a well-protected, deep-water harbour that can house a new inventory of larger vessels. Current naval bases do not provide large enough or deep enough berthing areas. Subic’s location in north-west Philippines would give the navy the added advantage of cutting response time in the event of security contingencies near Scarborough Shoal, the West Philippine Sea or even the north-eastern seaboard up to Benham Rise.

For regional security observers, perhaps the more compelling argument is that Subic itself should be secured against control by potentially destabilising forces. China’s de facto control of nearby Scarborough Shoal since 2012 — and its military presence on the Subi, Fiery Cross and Mischief reefs since 2014 (all which are claimed by the Philippines) — have altered the balance of military forces in the South China Sea in China’s favour. This is cause for concern for the Philippines, other littoral states and maritime powers like the United States and Japan.

During warfare, these isolated reefs might be considered indefensible sitting ducks. But the presence of the Chinese People’s Liberation Army and militia in the neighbourhood even now shapes and constrains strategic options by other states. The territorial disputes are yet unresolved, and the outcomes of China–US geopolitical competition remain uncertain, while tensions across the Taiwan Straits are heating up.

In such conditions, strategic locations such as Subic Bay — where the US and Philippine militaries still hold intermittent exercises — become all the more relevant, not just for the Philippines but for China’s and the broader region’s security interests. Duterte’s government understandably does not want to be caught between the two major powers as economic ties with China expand. But Beijing’s growing maritime power and recent assertiveness threaten to cancel out the incipient economic and diplomatic benefits of improved relations since 2016. The Hanjin shipyard case is but a microcosm of this precarious dilemma that Manila faces in its China policy.

Aileen S P Baviera is Professor of China Studies and International Relations at the Asian Center, University of the Philippines and the founding president of Asia Pacific Pathways to Progress.