The inter-Korean summit between South Korean President Moon Jae-in and North Korean leader Kim Jong-un on 27 April in Panmunjom captivated television audiences around the world. The summit was a masterpiece in optics and symbolism as Kim Jong-un became the first North Korean leader to set foot in the South and the two leaders presented a bold declaration of intention for the two Koreas to take their destiny into their own hands and forge a sustainable peace. Reactions have been predictably polarised between hawks, who continue to caution that North Korea has a history of setting diplomatic traps and has no intention of actually denuclearising, and doves, who hailed the success of the summit as the beginning of a new era of peace in Northeast Asia. 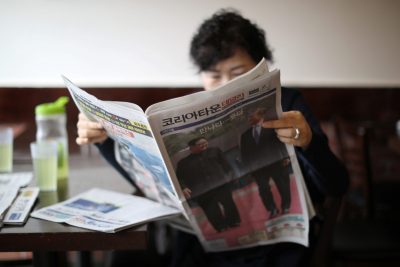 What needs to be done now to realise the summit’s promise of peace?

The Panmunjom Declaration for Peace, Prosperity and Unification of the Korean Peninsula signed by the two leaders is a highly positive step forward, but there remains a long road ahead to realise its lofty ambitions.

First, the Declaration pledged a number of initiatives to promote inter-Korean interaction. This includes the establishment of a joint liaison office in Kaesong, restarting family reunion visits for families separated since the Korean War, and the fielding of joint teams at international sports events (starting with the 2018 Asian Games). These interactions will help build mutual confidence between the two Koreas as well as provide channels for increased communication.

Second, the Declaration commits the two Koreas to ‘joint efforts to alleviate … military tension and practically eliminate the danger of war on the Korean Peninsula’. This is to be achieved by transforming ‘the demilitarized zone into a peace zone’, turning the ‘Northern Limit Line in the West Sea into a maritime peace zone’, by suspending propaganda broadcasts into each other’s countries and by holding ‘frequent meetings between military authorities’ to ‘discuss and solve military issues’. These measures are intended to mitigate the vicious cycle of escalating and pulling back from military tensions.

Third, the two sides vowed in the Declaration to ‘establish a permanent and solid peace regime on the Korean Peninsula’. This entails the intention to convert the 1953 Armistice Agreement into a permanent peace treaty in conjunction with the United States and China by the end of this year, which marks the 65th anniversary of the end of the Korean War. With regard to nuclear weapons, both sides ‘confirmed the common goal of realising, through complete denuclearisation, a nuclear-free Korean Peninsula’.

This remarkable turnaround from last year’s tensions, which looked set to boil over into war, was made possible by a combination of factors. Increased pressure on North Korea through the international sanctions regime started to bite — especially with China’s serious participation since mid-2017. Trump’s reckless rhetoric and threats to launch a pre-emptive ‘bloody nose’ strike encouraged the two Koreas to retake the initiative and avoid having Washington drive them into violent conflict not of their own making. Moon’s skilful use of the Winter Olympics provided an opening to get his diplomatic initiative-making off the ground. Trump’s U-turn decision to become the first US president to meet with a North Korean leader and to back Moon’s peacemaking agenda helped bolster the process. And Moon has willingly passed on the credit to Trump to keep the diplomatic momentum rolling.

As Gi-wook Shin and Joyce Lee explain in our lead article this week, the summit at times ‘felt like a rerun of 2000 and 2007 when the two previous inter-Korean meetings occurred’. The risk is that the momentum to realise the implementation of the Declaration’s ambitions may fall short. A key difference this time around, however, is that ‘the 2018 inter-Korean summit was not an end in and of itself but part of a larger process’ of a series of summits.

Later this week Moon will meet with Chinese Premier Li Keqiang and Japanese Prime Minister Shinzo Abe for the first China–Japan–ROK trilateral summit in three years. Moon and Trump are slated to meet to coordinate a roadmap for Trump and Kim Jong-un’s summit set for late May or early June. A summit meeting between Abe and Kim is reported to be in the works. And the Panmunjom Declaration itself promised a reciprocal visit by Moon to Pyongyang in the northern autumn. The success of this series of summits will hinge on how far North Korea is willing to go toward denuclearising and how far the international community can go in providing North Korea with security guarantees for the long-term survival of its regime.

Kim Jong-un has already pledged that North Korea will suspend its nuclear and missile testing as well as to close down the Punggye-ri nuclear test site — a decision that may have been made easier by the reported collapse of a cavity in the mountain that sits upon it. These moratoriums are a good start. Now follow through is required to formulate an agreement on a dismantlement roadmap and inspection procedures.

One complication, as Shin and Lee caution, is that ‘North Korea already possesses the techniques and manpower to assemble nuclear weapons in just a few months (or even weeks)’. Kim ‘may simply intend to create new nuclear weapons when he sees a need to do so’ meaning a CVID (complete, verifiable, irreversible, dismantlement) approach faces significant challenges’. Thus, the long-term goal beyond dismantlement, Shin and Lee argue, ‘should be to transform North Korea into a normal state that no longer sees the need to pursue nuclearisation for deterrence, survival or any other reason’.

Another complication relates to how Trump, now with John Bolton as his new security advisor, handles the Iran deal which faces a 12 May deadline by which Trump must decide if the United States will continue with the agreement. If the United States were to pull out, this would send a negative message to North Korea and undermine the fragile foundation upon which the trust and shaping of a mutually acceptable US–DPRK deal now needs to be built.

The role of the United States and China will be crucial in providing sufficient security guarantees so that North Korea can know that its regime will be secure post-denuclearisation. A ready framework for this has already been forged in the September 2005 Six-Party Talks joint statement (this framework consisting of a peace treaty, diplomatic normalisation and international economic cooperation). Because the Panmunjom Declaration calls not just for North Korean denuclearisation but a ‘nuclear free Korean peninsula’ this has been interpreted as requiring structural changes to the US–ROK alliance. In particular, North Korea could demand the dismantlement of the US–South Korea Combined Forces Command machinery and the removal of the US nuclear umbrella over South Korea as part of the package of security guarantees.

As Shin and Lee conclude, ‘it remains to be seen whether the rest of the story will be a rerun of the same movie as before or whether a different, much happier ending awaits. The world is watching, with excitement but also caution to see if the Panmunjom Declaration can indeed live up to its promise.