Soon after the conclusion of the 2018 Winter Olympics, South Korea once again found itself in the international spotlight. On 27 April it humbly and successfully hosted a long-anticipated inter-Korean summit on its territory for the first time in history. The highly choreographed meeting was performed by the two lead actors almost exactly as scripted.But many impromptu moments of congeniality, which drew laughs from the audience as well as from the actors themselves, highlighted the two sides’ eagerness to make the summit a success. 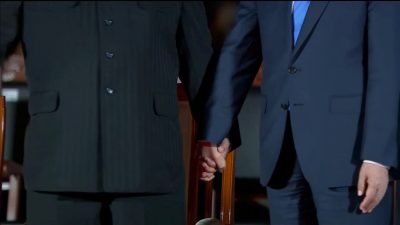 The leader of the most secluded nation on the globe, Kim Jong-un, made an impressive debut, as much of the world cheered at what just a few months ago seemed unimaginable. After declaring earlier that morning that he had come to ‘put an end to the history of confrontation’, Kim, jointly with South Korea’s President Moon Jae-in, promised to take steps to turn the existing armistice into a peace treaty and to realise a nuclear-free Korean Peninsula. Moon’s big gamble on North Korea seems to have paid off — at least for now.

But agreement does not instantly bring about peace, and what the world saw and heard at the summit was far from unprecedented. Instead, it all felt like a rerun of 2000 and 2007 when the two previous inter-Korean meetings occurred, or even 1992 when the two sides signed the Joint Declaration of the Denuclearization of the Korean Peninsula. Talk of transitioning from an armistice to a peace treaty was a key feature of the 2007 summit between then North Korean leader Kim Jong-il and South Korean president Roh Moo-hyun. The vague, aspirational language of past agreements has also remained much the same.

The 2018 inter-Korean summit was not an end in and of itself but part of a larger process leading to a more important summit between North Korea and the United States — the likes of which have never been seen before. But renewed hope can be a double-edged sword, putting greater pressure on the US–DPRK meeting to produce a bigger, more conclusive deal that includes substantive specifics. Moon will meet with US President Donald Trump prior to Trump’s big meeting with Kim, expected this month, and the two will sharpen their joint strategy for the denuclearisation of North Korea. The real work begins now.

The highly choreographed inter-Korean meeting stressed dramatic images and symbolism. The upcoming summit might do the same, only to a greater extent. It certainly will be a historic moment, after months of diplomatic wrangling, to see the two previously sworn enemies shake hands and exchange smiles (or possibly enjoy hamburgers together). But without much substance in the result, the two sides could quickly find themselves back on an even more hostile trajectory than before. Knowing the potential pitfalls, Kim and Trump may put on the greatest reality show in history with some dramatic gestures, perhaps even the destruction of some or all of the existing nuclear weapons in North Korea.

North Korea, however, already possesses the techniques and manpower to assemble nuclear weapons in just a few months (or even weeks). While striking a grand deal with Trump, Kim may simply intend to create new nuclear weapons when he sees a need to do so. This makes the ‘complete, verifiable and irreversible denuclearisation’ of North Korea’s nuclear program a highly unrealistic goal. The long-term objective should be to transform North Korea into a normal state that no longer sees the need to pursue nuclearisation for deterrence, survival or any other reason.

There are still grounds to be cautiously optimistic that the new context may lead us to a happy ending this time. The 2018 ‘remake’ includes new actors in Kim, Moon and Trump as well as an important and different set of circumstances.

First, as a de facto nuclear state, North Korea may genuinely want to shift its focus to the economic pillar of the byungjin policy — the simultaneous pursuit of nuclear and economic development. Second, because the agreement between the two Koreas was reached in the early stages of President Moon’s tenure, he will have more time than his predecessors to work things out with North Korea diplomatically. Moon has already agreed to visit Pyongyang in the fall; the inter-Korean summit may become regular.

Taking the Peninsula from the brink of war to an atmosphere of renewed hope in just a few months, the inter-Korean summit has been a remarkable achievement and both Kim and Moon deserve a hearty round of applause for ushering it this far. But it remains to be seen whether the rest of the story will be a rerun of the same movie as before or whether a different, much happier ending awaits. The world is watching, with excitement but also caution, to see how the promises and goals of this day will be carried out.

Gi-Wook Shin is director of the Shorenstein Asia-Pacific Research Center at Stanford University.

Joyce Lee is a research professional in the Korea Program at the Shorenstein Asia-Pacific Research Center at Stanford University.