The rise of Philippine populist firebrand Rodrigo Duterte and his surprise victory in the 2016 presidential elections have left many in a state of shock — most notably the Philippine business, political and military elites and their close ally, the United States. 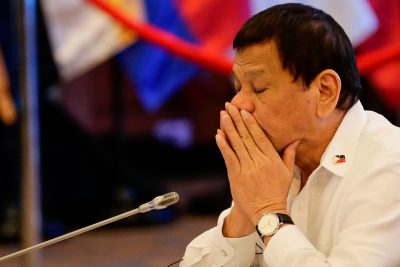 According to some commentators, the rise of Duterte was the culmination of three decades of failed ‘elite democracy’. The 1986 People Power Revolution deposed the corrupt regime of Ferdinand Marcos and saw the Philippines’ old elites return to power. Duterte’s rise came on the back of simmering public dissatisfaction with the post-Marcos elite democracy, which failed miserably to live up to its initial promise of social justice and sustainable development. In other words, Duterte is the product of ‘grievance politics’.

From another perspective, the rise of Duterte is often seen as part of the wave of populism that has been sweeping global politics in recent years as liberal elites around the world suffer stunning electoral setbacks.

But a closer examination suggests that neither explanation is entirely accurate. In contrast to the West, there is nothing new about populism in the Philippines. During the post-1986 period, Philippine politics has gyrated between establishment and populist figures — and Duterte may be just the latest twist. This is due to the Philippines’ fractured and polarised society and the inability of both sides of politics to deliver opportunity, prosperity and security to all Philippine citizens.

If history is any indication, the Philippines may shift back to the liberal establishment at the next presidential elections, as Filipinos tire of Duterte’s authoritarian rule. While many Filipinos were convinced that Duterte could replicate his great success in Davao on a national scale, this is proving challenging.

Another factor that played an important role in Duterte’s victory is the Philippines’ first-past-the-post presidential election system. While Duterte may now enjoy substantial popular support, he was able to win the presidency with only 39 per cent of the popular vote. Duterte did not win the election with a tidal wave of popular support. If the Philippines had held a runoff election between the two leading presidential candidates (as France does), it is not certain that Duterte would have won the presidency at all.

Other factors may have played a role in Duterte’s victory. Vote-buying is a chronic problem in the Philippines. Duterte’s team and supporters also seem to have been more adept at using social media, an advantage in a country crazy about Facebook.

Since becoming President of the Philippines in 2016, Duterte has dramatically transformed Philippine politics. Almost overnight, Duterte adopted an ‘independent’ and transactional foreign policy, in contrast to his predecessor Benigno Aquino and much of the previous century when the Philippines was a staunch US ally. Duterte and his team have announced that the Philippines can no longer be the United States’ ‘little brown brother’ in Asia.

Duterte’s new foreign policy has several pillars that include improving relations with China and Russia, moving away from the country’s tight and subservient alignment with the United States and strengthening ties with ASEAN, Japan and other neighbouring countries. His strategic logic makes sense for a smaller country precariously caught between competing superpowers. It is perhaps about time that the Philippines adjusted to the new geopolitical realities of East Asia, in light of the enormous growth of the region’s markets.

Where Duterte is concerned, personal factors always come into the calculation. In this case, he is clearly miffed by his perceived personal mistreatment by the United States in the form of an alleged refusal of a visa application and the United States’ historical misdeeds in Mindanao, his home island.

But will Duterte’s pivot away from the United States stick?

If the next presidential election sees a return to a liberal establishment figure, the Philippines might also pivot back towards the United States and away from China. After all, the Philippines is inextricably intertwined with the United States through connections between business, political and military elites, through migration and through Philippine admiration of US pop culture. And the unruly Philippines will surely tire of being ‘lorded over’ by an authoritarian China.

Duterte’s ‘populist presidency’ could disappear as suddenly as it emerged, if his reportedly poor health deteriorates even further. Under the Philippine political system, Duterte would be replaced by Vice President Leni Robredo, who is an establishment figure rather than a populist one. But with Duterte at the helm, we should always be ready for surprises.

John West is Adjunct Professor at Sophia University in Tokyo. He is author of Asian Century… on a Knife-edge: A 360 Degree Analysis of Asia’s Recent Economic Development (Palgrave Macmillan, 2018).