Ever since North Korean leader Kim Jong-un’s firm but conciliatory New Year’s Day address, including his expression of pride in his Southern counterparts’ hosting of the Winter Olympics, developments on the Korean Peninsula have raced ahead at a breakneck pace. 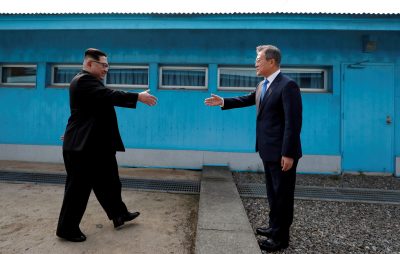 On 27 April at the Peace House on the southern side of the inter-Korean border village of Panmunjom, the two Koreas took a giant step towards winding down their anachronistic Cold War-era division. The Panmunjom Declaration’s goal of announcing a formal end to the Korean War on the 65th anniversary year of the armistice and establishing a robust ‘peace regime’ is not a chimera; it is a brilliant but not-unattainable goal. Not since the end of the Korean War conflict in 1953 has such a profoundly hopeful moment presented itself on the Peninsula.

Success has many fathers (in this case US President Donald Trump, Chinese President Xi Jinping and Kim Jong-un) but the foremost credit for the remarkable turnaround in the Peninsula’s fortunes rests with South Korea’s President Moon Jae-in. Had the cast of protagonists remained the same but with a typical hardline conservative government holding the reins of power in Seoul, Kim Jong-un — after testing his strategic weapons on the same condensed schedule as 2017 — would have retreated to his den, emerging only occasionally to unleash furious threats of fire and fury. It is a testament to the patience and perseverance on the part of successive progressive governments in Seoul to tease the Kim regime into the ‘sunshine’ and provide a pathway to global integration that Northeast Asia stands today at this hopeful turn.

As the two Koreas chart their unique tryst with destiny, two irreducible principles must guide every significant action going forward.

Pyongyang’s declared willingness to permanently forego this capability should not be dismissed summarily. Kim Jong-un already enjoys the assured ability to inflict unacceptable damage to his adversary — the logic of possessing nuclear weapons — by way of thousands of artillery tubes located within 50 kilometres or so of Seoul. An actual nuclear weapon mated to an inter-continental or intermediate range ballistic weapon is a leverageable asset that can be traded away for the right price — the full denuclearisation of the Korean peninsula, revocation of the United States’ extended deterrence guarantee to Seoul, security assurances by Washington and Beijing to the North Korean regime and state, conversion of the armistice agreement into a peace treaty, and normalisation of diplomatic relations with the United States. In this regard, Kim’s circumstances are markedly different from those of Saddam Hussein or Muammar Gaddafi.

But given successive breaches of past denuclearisation-related obligations, economic inducements, security assurances, dismantlement of the US–South Korea Combined Forces Command machinery and a tripartite US–China–North Korea peace treaty must be backloaded until the dismantling of Pyongyang’s WMD capabilities and attendant delivery vehicles is substantially completed. Trump’s insistence on (and Kim’s in-principle concurrence to) a greatly accelerated inspection and verification schedule of nuclear abolishment, orders of magnitude faster than the 1994 Agreed Framework and 2005 Six-Party Talks timelines, could — should America’s price be right — incentivise Kim to dispense with his key bargaining chip: the details of the locations of his dispersed WMDs.

Second, the two Koreas must enjoy the strategic autonomy to take ownership of their fate and determine their future.

It is for Koreans, and Koreans alone — not allies, adversaries or partners — to be the authors of their destiny, including the strategic orientation of a reunified Peninsula with a population of 80 million. Decisions that pertain to the disposition of existing conventional forces on the Peninsula (be it the US troop presence, ballistic missile defence deployments or security arrangements with third parties) must be made on the basis of mutual consensus of both Koreas. The Peninsula, and the 38th parallel in particular, must cease to be the tripwire of a Northeast Asian ideological or values-based geopolitical contest.

As a first step to give meaning to their mutual non-aggression pledges and breathe life into inter-Korean cooperative projects of a strategic character, Seoul and Pyongyang should designate a joint fishing zone in the Yellow Sea that softens — and ultimately eliminates — the need for the Northern Limit Line (NLL). The NLL, a unilaterally promulgated and faultily drawn sea-based extension of the military demarcation line, cuts deeply into Pyongyang’s maritime entitlements and cannot, as per the Law of the Sea, be sustained as a fair or equitable maritime boundary. That the Ongjin Peninsula (which is enveloped by the NLL) was the locus of initial skirmishes that led to the full-scale outbreak of war on 25 June 1950 makes it all the more fitting that the North and South galvanise the commencement of their new historical moment here.

The Korean War was the defining event of the international relations of the Asia Pacific during the second half of the 20th century. Following its outbreak, the United States almost overnight reversed its stance and became a direct participant in four Asian civil wars (on the Peninsula, in the Taiwan straits, in Indochina and in the Philippines). With the two Koreas having come full circle in Panmunjom almost seven decades later, it is time to firmly consign that bitter history to the past — and with the support of the international community, usher in a new age of peace, prosperity and hope on the Peninsula and in Northeast Asia.

Sourabh Gupta is Senior Fellow at the Institute for China–America Studies in Washington DC. A version of this article was first published here in The South China Morning Post.