The upcoming summit between South Korean President Moon Jae-in and North Korean leader Kim Jong-un will be more important than any meeting between Kim and US President Donald Trump that may follow. Not only will a South–North summit actually happen, it will directly affect a possible Trump–Kim summit.

Both North and South Korea are methodically preparing for their meeting, and the North has already made tangible concessions to the South. But US media has been focussed overwhelmingly on the Trump–Kim summit — asking whether it will actually happen, where it would happen and how the abrupt arrival and departure of key foreign policy advisors in the US administration could affect Trump. 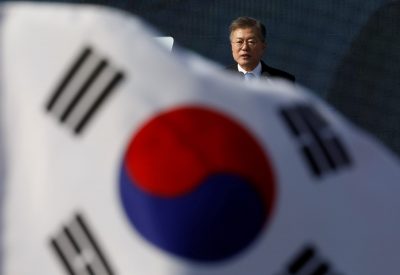 If the Moon–Kim summit goes poorly, there may not even be a Trump–Kim summit and tensions will spike on the Peninsula. If the first summit goes well, it will guide, direct and constrain how the United States interacts with North Korea and raise the possibility of some type of de-escalation.

Both North and South Korea have approached the summit in a careful manner. Although it is a common trope to call Kim Jong-un ‘crazy’ and ‘erratic’, his actions in 2017 reveal a methodical, deliberate leader.

For example, on 1 January 2017 Kim claimed that North Korea was entering the ‘final stage of preparation for the test launch of intercontinental ballistic missiles’. All last year, despite threats, sanctions and informal overtures from the United States, Kim tested numerous missiles and rejected any offers to meet. On 1 January 2018, Kim said that the ‘great historic achievement’ of North Korea’s nuclear weapons development had ‘opened up bright prospects for the building of a prosperous country’.

Immediately following this, Kim offered to send North Korean athletes to the Olympics along with his sister, Kim Yo-jong, as his representative, and proposed meetings with both Moon and Trump. These offers and the ongoing missile testing moratorium were not a result of hasty, last-minute behaviour. Rather, it was the behaviour of a regime that planned its actions long in advance.

Moon Jae-in and Kim Yo-jong spent three days with each other during the Olympics. While there were some social events, they also clearly spoke substantively about a number of issues — that’s exactly why she was there.

For South Korea’s part, the summit is also not a hasty or ad hoc diplomatic overture. Moon and members of his administration are experienced in dealing with North Korea. Moon was chief of staff for South Korea’s president when the last North–South summit was held in 2007. Moon has had a decade to think about what went right, what went wrong and how to do better.

Both Kim Jong-un and Moon Jae-in will attend any summit meeting knowing that something substantive must result for the summit to be considered a success.

Already there has been a tangible improvement in relations between North and South Korea. They sent a joint sports team to the Olympics. The hotline between South and North Korea has been re-opened at Panmunjom, and Moon and Kim are establishing a hotline between the two leaders themselves. Kim has already made small concessions: he agreed to meet in the de-militarised zone at Panmunjom, not the North Korean capital of Pyongyang. Kim has pledged a moratorium on missile testing, even during the US–South Korea military exercises planned for April 2018. And doubtless Kim and Moon have suggested other points of give and take that could be on the table. This is significant progress in the right direction.

Usually most negotiations are done before the actual summit so there are no surprises. There is a very good chance that representatives for Moon and Kim have already tentatively agreed on a few intermediate steps both sides could take to de-escalate the situation. The key question will be what Moon offers Kim for these interim steps.

Critically, the South will also ‘road test’ a set of possible negotiating points that could come up between Trump and Kim. This would provide both the United States and North Korea some indication of what is possible if the two sides ever meet. In this way, the South–North summit is not only going to set the tone for any possible subsequent meetings, it will also set the substance.

A successful Moon–Kim summit that leads to any substantive points of agreement, such as a freeze of some type, would be significant and set up a Trump–Kim summit for success. A substance-free meeting between Moon and Kim will make it almost impossible for Trump to meet Kim. While what the United States decides to do is of course important, it is just as important to remember how much South and North Korea hold their own future in their own hands.

Both Kim and Moon are playing for the highest possible stakes. The key question is whether they are able to conduct their diplomacy at this level.

David C Kang is Professor of International Relations and Business at the University of Southern California, where he also directs the Korean Studies Institute and the Center for International Studies. His latest book is American Grand Strategy and East Asian Security in the 21st Century, published in 2017.