Nearly 70 years after its founding, the US–Australia alliance (ANZUS) is confronting geopolitical and populist challenges that, if not managed properly, could seriously affect its credibility. China’s rise to global power status and its intensifying nationalism, the United States’ retrenchment from international free trade arrangements and multilateral diplomacy under President Donald Trump and intensifying questions about the durability of the post-war international liberal order are testing ANZUS in critical ways. 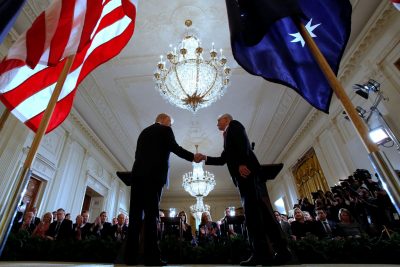 But this was not the reality described by Australian Prime Minister Malcolm Turnbull during his February 2018 visit to Washington. Paying tribute in platitudes to ‘100 years of mateship’, Turnbull stressed that Australia continues to share with the United States a reverence for democratic values, a love of freedom and dedication to the rule of law.

After a rocky start, momentum for a more positive Australia–US relationship under Trump has since grown.

The designation of US Pacific Commander Admiral Harry Harris as the United States’ next ambassador to Australia — an announcement made just two weeks prior to Turnbull’s US visit — reinforced alliance continuity, a year and a half into Trump’s term. At the same time, US Joint Chiefs of Staff Chairman General Joseph Dunford conducted a highly visible tour of US Marine operations in Darwin, underscoring US strategic commitments to Australia as a core regional ally.

The United States continues to be the largest source of foreign investment in Australia and is the largest overseas destination for Australian capital. This was celebrated by Trump and Turnbull at a 23 February press conference, with Trump observing that ‘our close friendship and our enduring alliance … will grow even stronger in the century to come’.

Underlying such public optimism are some stark realities. The Trump administration’s December 2017 National Security Statement earmarked China as a fundamental threat to US economic and strategic viability. At his press conference with Turnbull, Trump accused China of ‘absolutely killing us with trade’ and followed up in early March by announcing substantial tariffs on steel and aluminium exports to the United States.

The Turnbull government, consistent with its predecessors, has stated it does not view China as a military threat to Australia. This is despite its ongoing initiatives to put in place more stringent foreign interference laws designed to modify what many in Australia perceive as growing Chinese influence in Australian politics and selected investment sectors.

ANZUS policy coordination on China will be tested if Australia decides to conduct a freedom of navigation operation in the South China Sea. This would challenge China’s determination to enforce its 12 nautical mile sovereign claims contiguous to its reclaimed islands in these waters. The United States has long encouraged Australia to perform such an exercise.

Reluctant to alienate China, Canberra may feel too constrained to carry out any such operation (despite the inevitable pressure that Ambassador Harris, a hardliner on China policy, will likely impose). Indeed, Australian Foreign Minister Julie Bishop said at a business summit in early March 2018 that Australia would not ‘unilaterally provoke an increase in tensions in the South China Sea’ by dispatching its naval units too close to the islands in question.

Turnbull and Trump reached an understanding at a side meeting at the July 2017 G20 summit in Hamburg that Australia would be exempt from US steel and aluminium tariffs if they were imposed. After some initial uncertainty following Trump’s March 2018 announcement about US trade tariff impositions, Washington appeared to honour its promise and did so without any quid pro quo for Australia becoming involved in US military operations in the South China Sea or elsewhere. This development at least partially blunted Australian alliance sceptics’ arguments that Trump’s ‘America First’ posture is truly an ‘America Only’ one, as initially evidenced by Trump’s decision to withdraw from the Trans-Pacific Partnership.

Perhaps the key test of the relevance of ANZUS over the next few months will be how well Australia and the United States can coordinate policy on North Korea.

While in Washington, Turnbull emphasised Australia’s levying of sanctions against Pyongyang in accordance with UN Resolutions as evidence of a united strategy. Turnbull had previously asserted that Australia would back the United States in a conflict with North Korea. But the Prime Minister also advanced an important caveat — that such support would be forthcoming only in the event the North Koreans attacked the United States first.

Given Donald Trump’s acceptance of North Korean President Kim Jong-un’s invitation to hold a summit later this year, traditional US alliance politics may not apply. Australia’s political leaders and its political and military advisors must retain their extraordinary access to their US counterparts given this unexpectedly rapid policy change now unfolding in Northeast Asia. Certainly ANZUS-related intelligence assets such as the Pine Gap joint installation would be a major factor in any future North Korea–US conflict if the negotiations fail to produce greater stability on the Korean Peninsula.

Ultimately, Australia must endure and sustain its traditional security relationship with the United States even while dealing with the most unorthodox US president in recent history. No other great power would be willing to provide Australia with an equivalent or better arrangement than the US alliance without exacting a very steep price.

William Tow is Professor of International Relations at the Coral Bell School of Asia Pacific Affairs, The Australian National University.