Although peace was the prevailing theme of the opening night at the Pyeongchang Winter Olympics, the air in the VIP box was charged with awkwardness and intimidation. According to International Olympic Committee President Thomas Bach, North and South Korea had sent a ‘powerful message of peace’ to the world by uniting as one for the Winter Olympics. It was clear that not all countries found this showcase of peace and unity easy to swallow. 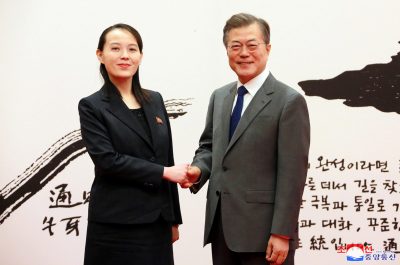 Only a few feet away from US Vice President Mike Pence sat Kim Yo-jong, sister of and special envoy for North Korean leader Kim Jong-un. Pence’s stony face announced his determination not to make the first visit from a member of the Kim dynasty to South Korea a welcoming one. No eye contact or nods of acknowledgement were exchanged between the two adversaries. South Korean President Moon Jae-in, who was positioned awkwardly between an increasingly distant ally and an increasingly charming enemy, altered between looks of pride, excitement, discomfort and frustration.

In the lead-up to the event, Moon had gambled on a strategy with much greater risk than expected return. He immediately welcomed North Korea’s abrupt decision to participate in the games, betting that it would alleviate the possibility of a North Korean provocation during the events and would build crucial momentum for peace on the Korean Peninsula.

At least initially, that gamble has paid off: North Korea’s participation did ease international concerns and signalled a dramatic diplomatic breakthrough in inter-Korean relations. The two Koreas marched together under a ‘unified flag’ at the opening ceremony, fielded a unified women’s ice hockey team and held two musical performances by a North Korean band in South Korea.

While much of the international community greets these developments with a cautious hope for peace, the United States and Japan remain cynical if not outright critical. The United States warned against Pyongyang’s propaganda efforts, and many of Pence’s activities on his visit to South Korea were aimed at rebuffing the North’s charm offensive and highlighting its brutalities. Accompanied by the father of the late Otto Warmbier (who died a few days after he was released from a North Korean prison in a coma), Pence began his trip by touring and paying respects at the Cheonan Memorial and meeting with a group of North Korean defectors.

Also pressing is the South Korean public’s backlash against what they perceive to be South Korea’s unreasonable concessions to an undeserving country. The concept of one Korea and ethnic nationalism no longer has much appeal for the current generation of South Koreans. Critics and opponents of Moon’s appeasement have tagged the games in Pyeongchang the ‘Pyongyang Olympics’.

The odds are probably in the critics’ favour. It would be naive to think that any of these colourful developments would lead anywhere near a denuclearised North Korea and permanent peace on the Peninsula. There have been several attempts to use sports as an avenue for inter-Korean reconciliation, and the two Koreas have now marched together 10 times at international sports events. But peace and reconciliation through joint sports teams have proven elusive, and overtures from the North have a history of being fleeting and deceitful.

Tensions may resurface or even escalate soon after this festival concludes — the North Korean regime may react furiously to the resumption of US–South Korea joint military exercises or take advantage of South Korea’s rapprochement momentum to drive a wedge between the allies. Moon will then have to pay a great political price, both domestically and internationally.

Nevertheless, Moon was wise not to pass on this opportunity. Inter-Korean relations had reached a deadlock, and the only way out was to bring the South’s stubborn counterpart back to the table. The North’s participation in the Olympics offered just that. Kim Jong-un, with whom no head of state has ever met, officially invited Moon to Pyongyang for his first ever summit ‘at the earliest date possible’.

South Korea now sits in the driver’s seat and is trying to navigate a way forward. The North’s motivations may be suspect, but Pyeongchang presents an opportunity too good to miss for South Korea to exercise much greater leadership in its foreign relations. After all, no other state has South Korea’s combination of potential influence and desire to change the status quo on the Korean Peninsula.

There is no alternative but to resume talks with the rogue state. Every nation involved agrees that a military option should only come second to diplomacy. While the international community sends its support for increased South Korean leadership, Moon, for his part, should take additional steps to reassure his worried friends — not to mention his own people — that he has a clear denuclearisation agenda. He needs to show he will not allow Kim Jong-un to hijack the driver’s seat and lead the international community to Kim’s desired destination: the recognition of a nuclear North Korea. The real test for Moon’s leadership begins now.

Gi-Wook Shin is director of the Shorenstein Asia-Pacific Research Center at Stanford University.

Joyce Lee is a research professional in the Korea Program at the Shorenstein Asia-Pacific Research Center at Stanford University.