The geopolitical risks surrounding South Korea are now on everybody’s mind. But in the past two decades they’ve had remarkably little impact on the performance of the South Korean economy. 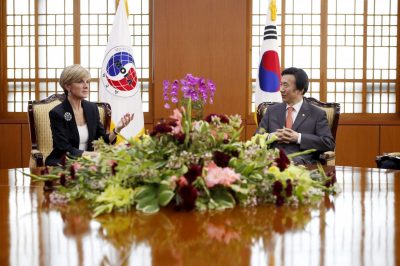 The intensification of tensions between the Trump administration and North Korea’s Kim Jong-un in recent months has changed that. While equity and currency markets have not been unaffected, they’ve proved relatively resilient, South Korean credit default swaps — a measure of risk — have almost doubled in 12 months.

In thinking about South Korea’s long-term prospects there are broader structural challenges to its economy that need to be considered, and scenarios under which reunification between South and North Korea might occur, although that may be many years down the track.

South Korea is the fourth largest economy in Asia. It has enjoyed unbroken growth for almost 20 years and has consistently outperformed other advanced G20 economies. In 1960, per capita income in South Korea was around five per cent that of the United States in real terms. By the time of the 2008 global financial crisis, it had increased to 55 per cent. Last year it was 62 per cent. Within these decades, South Korea joined the Organisation for Economic Cooperation and Development (OECD) and is now Australia’s fourth largest trading partner, with two-way trade at AU$29 billion (US$22.2 billion). This is a massive seven-fold increase since 1990, now boosted by their new free trade agreement.

South Korea is at the heart of Australia’s Northeast Asian economic and strategic interests. It sits slap-bang between two of Australia’s largest trading partners, China and Japan, and its high level of international trade interdependence results from its own trade ties with these two major economic powers.

In the event of military conflict between North Korea and the United States there is likely to be incalculable damage to major industrial centres in South Korea. There would be a huge loss of life in South Korea, Northern China and Japan — all of which are reliant on externally procured strategic raw materials and energy supplies from Australia.

The geopolitical risks associated with the North Korean threat to Northeast Asian security underline the importance of South Korea to Australia. This is not only due to the substantial ties that now exist between the two countries, but also because of South Korea’s role in East Asian economic integration, through the participation of its major corporations in global value chains as well as the increasingly important role of its economy in services and financial markets. These industrial linkages are the backbone of the whole East Asian economy.

A more sophisticated and proactive diplomacy in the region to protect those interests than deployed so far is urgent.

On security matters, diplomacy that merely echoes Mr Trump’s calls for China to increase pressure on North Korea to curtail its ballistic missile and nuclear programs is a first only in pursuing Australia’s national interests in a theatre in which almost half of its external economic assets are located. Australia needs to articulate an approach to the North Korean problem that takes into account the interdependent interests of all key regional stakeholders in their resolution.

The South Korea–Australia free trade agreement (KAFTA) has set a course for rapid growth in Australia’s trade relationship with South Korea. It carries exceptional growth opportunities for many sectors that were formerly heavily protected, or in which there was discrimination against Australian imports, including agriculture, horticulture and key markets in manufacturing, mining and services. Australia’s agricultural exports to South Korea alone are projected to increase by 73 per cent by 2030.

Like other advanced economies, South Korea faces a number of structural challenges, including a rapidly ageing population, a high reliance on exports and rising household debt. But it is better placed than most to deal with them. Its negotiation of more than 50 free trade agreements has advanced a vigorous strategy of liberalisation and economic reform.

South Korea’s economic relationship with Australia has grown and diversified remarkably. While iron ore and coal still account for around 60 per cent of Australian exports — resources which are core to South Korea’s economic security — rapid growth in exports of agriculture and services like tourism and education has broadened the export basket. KAFTA secured equal access to key South Korean markets, such as beef and wine, and this trade is set to grow further as tariffs come down over the next decade and beyond.

Australia and South Korea share a similar background and position in the world. Both are competitive, market-based democracies with transparent and accountable governments. Both are middle powers which share a common strategic outlook, are multilaterally engaged and constructive citizens in international society. Both are strong allies of the United States, committed to a stable and prosperous Asia Pacific and actively promote the rules-based, international economic order. And the two economies are deeply intertwined.

The Australia–South Korea relationship is undervalued and underdone. The still-unfolding crisis on the Korean peninsula serves to underline its strategic neglect.

The dangers of the North Korean problem are evident in the daily news. But is there a political leader that has enunciated Australia’s deep interests in it let alone explained in depth what its special contribution might be to a resolution?

Peter Drysdale is head of the East Asian Bureau of Economic Research (EABER) and Editor-in-Chief of East Asia Forum. Adam Triggs is currently a visiting researcher at the Brookings Institution in Washington DC.