The Philippines is at the frontline of China’s entry into a strategic theatre in Asia that has been dominated by the United States since World War II. Its experience of China’s rise is a sometimes fraught daily reality. 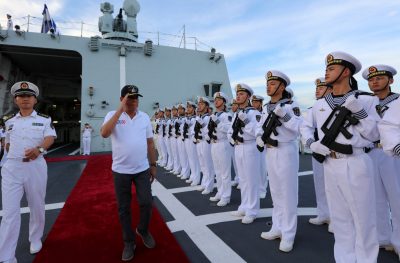 In disputed South China Sea territory, episodes like the standoffs between military personnel on remote reefs, tiffs over fishing rights, and brinkmanship over ‘red lines’ like the Scarborough Shoal are a reminder of the importance of the waters to the west of the Philippine archipelago.

The Philippines’ handling of China’s rise holds lessons for other countries sandwiched between Beijing’s provocation and US pressures.

For one thing, the Philippines might offer lessons in how to ‘compartmentalise’ different aspects of the relationship with China, as Aileen Baviera suggests in this week’s lead article. Despite immense tensions inherited from the Aquino administration, the government of Rodrigo Duterte has forged a path that might allow his country to benefit from economic engagement with China, while continuing to speak up on issues of national security and integrity.

First and foremost is Manila’s acknowledgement that, like it or not, the strategic status quo in the South China Sea has changed — and its own policy must reflect the new reality. The Aquino government’s commitment to using the instruments of international law was laudable. And Aquino’s stance may have gained some ground in the face of hard power realities. But in the face of Chinese determination, and inconsistent US policy, Duterte has taken a different approach.

‘Duterte’, writes Baviera, ‘has downplayed maritime disputes in favour of pursuing close economic and political ties with China’. The president, tired of megaphone diplomacy’s interfering with his goal of maximising the economic benefits of the China relationship, has agreed to leave the territorial disputes at a stalemate while he develops the bilateral economic relationship.

Such pragmatism has come from a curious, and indeed unlikely, source in Duterte. He is a strongman populist who is eroding Philippine institutions, favours brutal solutions to domestic social problems, and, on the surface, possesses an unsophisticated understanding of international affairs. Part of his rapport with China is presumed to stem from a shared disdain for Western preoccupations with human rights.

But Duterte’s preoccupation with policy ends — and disregard for the niceties of the means — may end up serving the Philippines well when it comes to the China relationship.

A mutually acceptable resolution of South China Sea disputes looks likely to entail a boost in Chinese aid and infrastructure investment, which the Philippine economy could use to maintain its healthy growth momentum. As Baviera notes, ‘China now sees the Philippines as a welcome partner in its Asian Infrastructure Investment Bank and the Belt and Road Initiative’. China has responded appreciatively, desisting from further provocations such as beginning construction activities on the disputed Scarborough Shoal.

The pivot to pragmatism from Manila has also had positive spillovers for ASEAN, a central player in any sustainable settlement between China and regional states over the South China Sea. Instead of undermining regional resolve on territorial issues, ‘Duterte’s China policy shift also reduces disagreement within ASEAN over the handling of the disputes’, and ‘forces some of the other stakeholders who were formerly free-riding on Philippine efforts to do more on the issue, thus easing pressure on the Philippines’.

This dynamic makes the formation of a common ASEAN position more likely: polarisation and provocation on the part of one aggrieved member state can spell doom for ASEAN’s ability to work towards consensus and retain its relevance on South China Sea disputes.

But, as Baviera concludes, the key ingredient is whether China will reward a more nuanced Philippines position with accommodations of its own. The opportunity for de-escalation of tensions, allowing for a sustainable resolution to the South China Sea issue and enhanced trust among Southeast Asians, is Beijing’s for the taking.

The EAF Editorial Board is comprised of Peter Drysdale, Shiro Armstrong, Ben Ascione, Amy King, Liam Gammon, Jillian Mowbray-Tsutsumi and Ben Hillman, and is located in the Crawford School of Public Policy in the ANU College of Asia and the Pacific.