On 15 April South Korea held the world’s first general election in the COVID-19 era. Despite the pandemic, the country saw its highest voter turnout — 66 per cent — since 1992. That so many voters felt secure enough to take to the polls is a testament to the Moon Jae-in administration’s successful handling of the pandemic. His ruling Democratic Party (DP) was rewarded handsomely, capturing 60 per cent of the seats in the National Assembly. 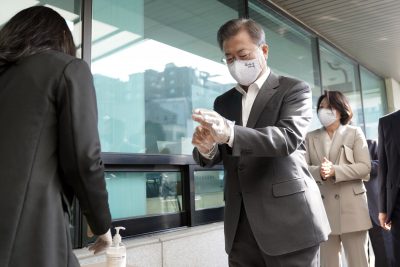 The centre-left DP has enjoyed a string of electoral victories over the past three years, leading to speculation that South Korea’s political mainstream has shifted from conservative to liberal. Proponents of this view emphasise that the DP ‘has become the majority party at all levels of government for the first time in history’. One analyst stated that ‘South Korea is a liberal country now’.

But it is premature to claim that seven decades of conservative political hegemony have come to an end.

The DP’s historic victory can be attributed largely to President Moon’s handling of the COVID-19 pandemic. Thanks to efficient and innovative management, South Korea went from crisis epicentre to international role model. This provided the Democrats an advantage, as their pandemic response overshadowed their unpopular manifesto pledges, such as income-led growth, electoral reform and nuclear phase-out.

Even when examining long-term trends, the claim of a new liberal mainstream in South Korea is dubious. Proponents point to the fact that the DP has won four successive national elections since 2016. It is indeed the first party to achieve this feat in the post-democracy era. These victories were not the result of South Korean political realignment, but rather a response to the scandals and inadequate leadership shown by the main conservative party, now known as the United Future Party (UFP).

The last conservative president, Park Geun-hye, responded poorly to national crises like the 2014 sinking of a ferry that led to 304 deaths and the 2015 MERS virus outbreak. A corruption scandal stripped her of moral credibility and resulted in her impeachment and arrest in 2017. Her dramatic fall from grace paved a clear path to power for Moon Jae-in and the Democrats.

But instead of renouncing Park’s corruption, the UFP never fully recognised the legitimacy of the impeachment process. The party’s refusal to distance itself from the jailed former president was evident in its decision to appoint Park’s prime minister, Hwang Kyo-ahn, as its party leader. This decision may have appealed to the radical right, which is still convinced of Park’s innocence, but the unrepentant move alienated a large number of conservative swing voters who could not stomach the defence of the disgraced former president. The fact that Hwang failed to win in his own district in this election indicates a mistaken electoral strategy.

Another major mistake the UFP made was its decision to stick to outdated anti-communist rhetoric in an age when communism poses virtually no ideological threat to South Korea. Outside of a few regions where such language still resonates, this Cold War strategy is overwhelmingly met with ambivalence. Still, the UFP doubled down on anti-communist rhetoric during the coronavirus crisis, portraying Moon Jae-in as a shadow communist due to his decision to not close the borders to travellers from China.

The UFP even resorted to conspiracy theories, such as the ‘China-gate’ theory, which claims that the Chinese government is manipulating South Korean public opinion in ways that benefit Moon’s ‘communist’ agenda. But the UFP’s anti-communist rhetoric has largely fallen on deaf ears, as the Moon government’s science-driven coronavirus response won domestic and international praise.

Yet the UFP’s recurrent incompetence does not mean that a liberal hegemony is around the corner. Despite the UFP’s blunders, 42 per cent of voters in the recent election voted for conservative candidates, not far off the 50 per cent who voted for democratic candidates. Due to South Korea’s first-past-the-post electoral system for 253 out of 300 seats, this mere 8 per cent vote differential translated into a whopping 79-seat differential. So the DP’s current dominance should not be interpreted as a general leftward shift in South Korea.

For such an ideological shift to take place, the DP would need to overcome its biggest flaw: the economy. A major reason for the long political dominance of conservatives in South Korea is their image as the successors of autocrat Park Chung-hee (1961–79). Despite his horrendous human rights violations, he is still remembered fondly by conservatives as the architect of South Korea’s economic miracle in the 1960s and 1970s. Since then, economic growth has been seen as the gold standard of political success. If Moon is to appeal to conservatives, at a minimum he must get a handle on the economy.

So far, this is not happening. Moon’s progressive economic policy of income-led growth has only had moderate success, failing to win over conservative voters who still believe in the myth of trickle-down economics. The global economic downturn caused by COVID-19 could easily undo the goodwill that Moon and his DP have garnered among swing voters with their pandemic management success. In South Korean politics, economic growth is imperative to success, and the pandemic is bound to make this extremely tricky for the DP to achieve.

Claims of a new liberal hegemony in South Korea are premature. The DP’s recent electoral success is not the result of a popular realignment from conservative to liberal, but rather the result of the conservative party repeatedly shooting themselves in the foot. If the UFP can overcome the worst of its strategic incompetence, and if the economy keeps slumping, the alleged liberal turn is likely to be short-lived.