In 1941, even before the Japanese attack on Pearl Harbour, Paul Hasluck, then a public servant and later an Australian Liberal Party foreign minister, recommended the establishment in the Australian Department of External Affairs of a Post-Hostilities Section. 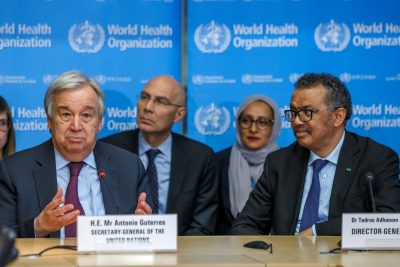 That section helped coordinate Australia’s participation in the series of meetings from which emerged the multilateral institutions that have shaped the contemporary world.

But even before the coronavirus struck, there were signs that the system was in trouble. Reaching global consensus has become increasingly difficult. Even the WHO has become a battleground for great power competition. From the Asian Financial Crisis of the late 1990s, China and other emerging economies wanted a greater stake in the system.

But in the 21st century, sovereignty is not enough.

Australia’s economic interests depend on a rules-based system that provides certainty as it works to preserve security, promote prosperity and deal with global challenges like climate change and pandemics.

As parts of the post-war order atrophied, Australian governments have helped shore up the mechanisms for international cooperation.

Australia’s Rudd government played an important role in establishing the G20 Leaders process; the Abbott government as G20 president focussed on global economic reform and resilience; the Turnbull government rescued the Trans-Pacific Partnership trade agreement; and the Morrison government has supported measures to keep the WTO’s rules-based system operating after the United States vetoed new appointments to the Appellate Body.

Australia needs to move towards a 21st century multilateralism, balancing its dependence on open markets with the rebuilding of global resilience in the wake of the socio-economic disruption caused by COVID-19.

Multilateral cooperation significantly takes place outside formal inter-governmental decision-making, in government agencies and research institutions. These contacts are important for countries like Australia, which is a price taker for both global capital and technology. As global technological competition and decoupling intensify, it is important for government to harness this informal multilateralism.

Still, international financial institutions are arguably the best performing elements of the multilateral system. Australia has credibility on IMF reform having pushed for two decades for emerging economies to have greater voting power in line with their economic weight. China has responsibly discharged the obligations that come with this greater role.

A greater reliance on trusted partnerships will likely need to underpin approaches to reform and restructuring. Institutions like the FAO and the WHO will require more attention given their central roles in dealing with problems that require global coordination. The WTO may need the straitjacket of consensus removed to avoid its fading relevance — 30 years without an effective global trade deal is a bad report card by any reckoning.

The glaring gap in global governance is the absence of rules governing the fourth industrial revolution — the digital economy. Governments have struggled to balance the benefits of technology with social licence and national security. Norms covering data, privacy and the regulation of digital platforms are already split between the European Union, the United States and China.

The chances of a new multilateral institution emerging — say a World Technology Organisation — that sets the rules for technology, similar to the Bretton Woods system, seems unlikely.

Australia should work with regional partners to agree on norms and standards that ensure openness to supply chains, as APEC has done for trade and investment flows.

The United States is reluctant to lead the necessary renovation of the rules and institutions required for the 21st century. Up until now, no other country has been willing to fill this leadership vacuum. The key unknown is the extent to which the United States and China can co-exist as both strategic rivals and partners for cooperation.

For Australia, the G20 is still the only multilateral institution where it has a seat at the table with the world’s most systemically important states. But with the G20 having failed as a first responder to the pandemic, Australia now needs to push for concerted action in three areas.

First, the G20 needs to support vulnerable parts of the world by making vaccines free when they become available, and by extending the moratorium on debt repayments for those that need it. With the developing world increasingly the driver of global growth, high debt levels risk putting the world on an even slower growth path as it emerges from this crisis.

Second, the G20 needs to agree on principles on global supply chain management to boost business confidence. A reflexive response to the crisis will be to lurch towards deeper protectionism, identify trusted suppliers and move to diversify supply chains. But these legitimate actions need not be steps towards autarky. The G20 has a key role in retaining the benefits of globalisation while ensuring open, stable and resilient supply chains. A failure to do so will lower living standards for everyone.

Third, Australia needs to resist the G20 being drawn into the US–China coronavirus blame game. In Australia’s region, some G20 members can rightly parley their handling of the pandemic into greater influence, but they could also look to hedge their bets on whether China emerges from this crisis weakened or strengthened.

Australian interests are best served by working to build a consensus for an independent review of lessons learnt, a road map for WHO reform and mechanisms to better integrate national and international public health systems.

Australia has always been an effective multilateralist. This should not change.

Heather Smith is former secretary of the Department of Industry, Innovation and Science and was Australia’s G20 sherpa in 2014.

Allan Gyngell is Honorary Professor at the College of Asia and the Pacific, the Australian National University, and National President of the Australian Institute of International Affairs (AIIA).

A longer version of this article originally appeared in the Australian Financial Review.