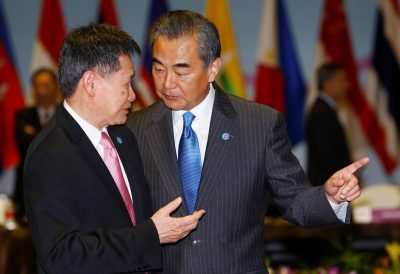 At the table-top exercise, ASEAN and China agreed to use the Code for Unplanned Encounters at Sea (CUES) as a basis for developing plans to respond to maritime incidents, including search-and-rescue and medical evacuation procedures.

Proposals for the inaugural ASEAN–China Maritime Exercise were first raised in May 2016 at the China–ASEAN Defence Ministers’ Informal Meeting, where they were mooted by then Chinese defence minister General Chang Wanquan. The idea was still in its infancy, and it was barely a month before the announcement of the Permanent Court of Arbitration ruling on the Philippines’ South China Sea legal challenge, so tensions were at an all-time high.

Fortuitously, the fateful release of the arbitral award on 12 July 2016 did not result in untoward events in the disputed waters. Both ASEAN and China worked feverishly to tamp down tensions. At the 19th China–ASEAN Summit in September of the same year, the 11 countries jointly reviewed and approved the Guidelines for Hotline Communications among Senior Officials.

It is noteworthy that China and ASEAN defined ‘maritime emergency’ in that document as ‘an incident in the South China Sea that requires immediate policy-level intervention in relation to the full and effective implementation of the [2002 Declaration of Conduct]’. According to this definition, such incidents span beyond standoffs between rival maritime forces to include other forms of aeronautical and maritime emergencies.

At the same meeting, the Joint Statement on the Application of the Code for Unplanned Encounters at Sea in the South China Sea was also adopted. CUES has already been practised in daily operations and had been set in various bilateral or much broader formats since 2014. But the joint statement reinforced the utility of this mechanism for preventing or mitigating close-proximity encounters between regional navies. Its incorporation in the inaugural ASEAN–China exercise is a re-emphasis of its importance in promoting regional maritime stability.

In October 2017, on the side-lines of the 4th ASEAN Defence Ministers’ Meeting Plus (ADMM+), Singapore and China discussed ‘further practical initiatives to advance ASEAN–China relations’, which included planning for the inaugural maritime exercise.

Multilateral maritime exercises, as a traditional form of cooperative naval diplomacy, are not a new thing in the region, at least not between ASEAN and China. Such drills have been conducted before under various formats, including bilateral ones between individual ASEAN navies and their Chinese counterpart. But these drills tend to cater to less complex and less controversial types of training itinerary, such as search-and-rescue operations and ship-to-ship radio communications exchanges.

A noteworthy example was the ADMM+ Maritime Security and Counter-Terrorism Exercise in May 2016, involving all 10 ASEAN countries as well as the eight dialogue partners and totalling 3500 personnel, 18 naval vessels, 25 aircraft and 40 special forces teams. There were also smaller-scale multilateral maritime exercises that did not involve all ASEAN member states.

In October 2017, China and some ASEAN member states (Brunei, Cambodia, Laos, Myanmar, the Philippines and Thailand) conducted a ‘Human Life Rescue and Win–Win Cooperation-themed’ maritime search and rescue drill off Zhanjiang, involving about 1000 personnel, 20 vessels and three helicopters. The drill, touted as the largest of its kind between China and ASEAN members, simulated a collision between a Chinese passenger ship and a Cambodian bulk cargo vessel.

For keen watchers of South China Sea issues, these events may create starkly different impressions. Sceptics may dismiss the exercises as yet another ‘showpiece’: a symbolic development that does not necessarily address the more pertinent problems in the South China Sea, in particular militarisation efforts in the disputed waters.

But proponents will hail the exercises as yet another shining example of ASEAN and China’s ability to work together to promote peace and stability in the waters and facilitate the eventual settlement of the disputes there.

Either way, there is still a long way to go towards dispute settlement. The proposed Code of Conduct (CoC) will take time to materialise, despite some level of optimism within ASEAN. Referring to the CoC, Philippine Secretary of Foreign Affairs Alan Cayetano recently said ‘the hope is that by November when our leaders meet, we will have it’, though he also called for everyone to ‘slightly mitigate [their] expectations’.

It is safe to assume that eventual promulgation of the CoC will at best be an uncertain prospect. Yet it is also clear that navies continue to prowl the South China Sea waters. Any maritime emergency will require swift collective action, and that is where existing confidence-building measures such as CUES become all the more crucial.

The inaugural, CUES-based ASEAN–China maritime exercise, if seen more from the humanitarian than from the geopolitical perspective, will kickstart new practical measures that ASEAN and Chinese navies can adopt to build confidence and promote maritime safety in the South China Sea.

A version of this article originally appeared here on RSIS.