When the former mayor of the southern city of Davao, Rodrigo Duterte, surged ahead of his establishment rivals in the 2016 presidential elections, some western media fell back on labelling him the ‘Trump of the East’. 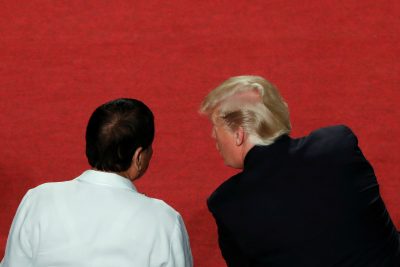 The comparison was apt but somewhat misleading. Duterte was not Asia’s Trump; rather, Donald Trump represented a breakthrough in the American context of a type of populist politics that has long been prominent in the electoral democracies of the post-colonial world. Now, during the COVID-19 pandemic, the consequences of populist political leadership for how a country responds to a crisis are grimly obvious.

No country in Asia more vividly emphasises the hazards populism poses to good governance and democratic quality than the Philippines under President Duterte. In this week’s lead article, Julio Teehankee surveys how Duterte’s freewheeling leadership has led his government to mishandle the greatest policy challenge that government has faced in a generation. Duterte’s latest State of the Nation address to Congress, Teehankee writes, ‘confirms his government’s lack of focus on the pandemic’, with the President continuing to lash out at his perceived enemies in the media, the political elite and civil society.

COVID-19 is a diabolical policy challenge for every country in developing Asia — but it has hit hardest in countries where populists hold office. Indonesia faces a slow-moving public health catastrophe as the government and President Joko Widodo grows ‘increasingly reliant on personal instincts over technical expertise’. In India, Prime Minister Narendra Modi’s ‘impulse to rely on the might of the state to enforce shock-and-awe tactics’ through a poorly-planned lockdown caused immense socio-economic disruption without commensurate public health benefit.

Broadening our outlook to the Americas, the nexus between populism and poor pandemic response becomes more palpable still. The world has looked on baffled and horrified as the Trump administration allowed the virus to spiral out of control in the United States. In Brazil, President Jair Bolsonaro has responded to the pandemic with an almost sociopathic negligence. Mexico’s left-populist President Andrés Manuel López Obrador has likewise downplayed the seriousness of the crisis.

Responses in all of these countries have fallen short for different reasons: either for being too complacent (as has been the case in Indonesia and in the Americas) or too heavy- handed to be sustainable (such as in India and the Philippines).

There is a subtle but important political dynamic at work. At its core, populism is an effort to unify a popular constituency from the top down under the leadership of a charismatic individual, often sidelining the technocrats and civil society groups that supposedly obstruct the leader enacting the people’s will.

The trouble is that the leadership of technocrats and civil society has never been in greater need— all the more so in developing Asia. Many low and middle-income electoral democracies across the region lack the state capacity to fully and fairly enforce lockdowns, have underdeveloped healthcare systems, and lack the fiscal and targeting capacity to systematically and effectively distribute welfare to those disadvantaged by the pandemic-related recession.

In such contexts, the first line of defence is education and public engagement. Governments need to promote apolitical, fact-based public health messages, and work with NGOs, religious institutions and the media to get critical information about hygiene and physical distancing to the grassroots. This can’t happen if populist leaders like Duterte dominate the airwaves prosecuting the same political antagonisms they do in ‘normal’ times.

There is clearly a conflict between what’s necessary to control this virus and the instincts of populists whose stock in trade is undermining the authority of technocrats and positioning themselves as trouble-shooters-in-chief. As Teehankee writes, ‘the pandemic has become an unfamiliar “enemy” for Duterte and his populist counterparts around the world. It is difficult to sustain a “people versus the elite” narrative against a viral and existential threat’.

Considering himself unrestrained by civil society, the media, and even other political institutions, opinion polls may be the only thing that prompt a leader like Duterte to turn to the more effective response that the Philippine medical community is calling for. Polls showed in late 2019 that he maintained the stratospheric approval ratings he attained since coming to office, but detailed surveys are on pause during the pandemic. What we do know is that Filipinos overwhelmingly tell pollsters that their quality of life is declining.

No amount of rhetorical smoke-and-mirrors can outweigh voters’ lived experiences of losing economic security or losing loved ones as a result of COVID-19 — as populist leaders the world over are now quickly learning, but too late.