Philippine President Rodrigo Duterte delivered his penultimate State of the Nation Address as the onslaught of COVID-19 pandemic continues. Instead of providing a concrete plan to address the rise and spread of the virus, he used the opportunity to attack his political enemies and reiterate his declaration of a war on many fronts. The populist president vowed to ‘fight this pandemic with the same fervour as our campaign against illegal drugs, criminality, insurgency, and corruption in high places and entrenched parochial interests’. 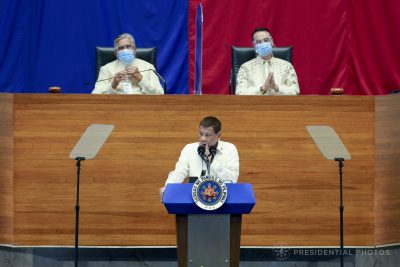 Duterte’s statement confirms his government’s lack of focus on the pandemic. It was only after four months of the strictest and longest lockdowns in the world that Duterte declared that the Philippines’ ‘number one problem today is COVID’. This declaration came after his government and political allies in Congress expended much of their energy passing a draconian Anti-Terrorism Law and ending the franchise of the country’s largest broadcast network ABS-CBN. Rappler news site CEO, Maria Ressa, and researcher Rey Santos were also convicted for cyber libel during this time.

While Duterte appears victorious in his assault against human rights and media freedom, his government’s record fighting its self-declared war on many fronts over the past four years is spotty at best.

Duterte ascended to the presidency on a ‘the people versus the corrupt elite’ narrative in 2016. He considers the closure of ABS-CBN a significant achievement in his administration’s fight against the so-called ‘oligarchs’. Since gaining power, Duterte has complained that he was wronged by the station during the election campaign and vowed to reject renewal of its franchise.

Among the oldest and wealthiest families in the Philippines, the Lopez family’s political power has waned throughout the latter part of the post-Marcos period. Its wealth has been overtaken by a new set of billionaires listed in Fortune 500. The late dictator Ferdinand Marcos used the dismantling of the Lopez empire and the oligarchy as his justification for placing the country under martial law in 1972. He similarly shut down ABS-CBN and subsequently handed its sequestered equipment and property to one of his cronies. One president’s oligarch is another’s crony — this has always been the system in the Philippines.

In his State of the Nation speech, Duterte lashed out against the country’s two leading telecommunication companies controlled by the Ayala family and billionaire Manuel V Pangilinan. Complaints of faulty telecommunication and internet services are hot button issues across all socio-economic classes in the Philippines.

As Duterte’s critics point out, his own set of cronies look just like an emerging oligarchy. An example is Davao-based businessman and Duterte campaign contributor Dennis Uy. Uy’s China-backed Dito Telecommunity is making a big push to break the telecom duopoly of Ayala’s Globe Telecom and Pangilinan’s Smart Communication. Dito has also recently announced its intention to produce digital entertainment and other content.

Duterte vowed to continue his bloody war on drugs . Despite causing thousands of deaths, the failing campaign has only seized 1 per cent of the total illegal drug supply in the country. He reiterated his desire to reimpose the death penalty by lethal injection. His call strikes an odd note as the COVID-19 death count rises. Duterte has applied the same ‘iron fist’ approach to the public health crisis. Instead of mobilising epidemiologists, virologists and scientists, he’s drawn in soldiers and police. Retired generals lead the inter-agency task force assigned to implement his COVID-19 national action plan.

His much-vaunted war on corruption is nothing more than mere rhetoric as the country’s anti-corruption scores continue to slide down in rankings published by international agencies. He has fired and rehired a number of officials linked to corruption. Allegations of massive fraud in the state-run Philippine Health Insurance Corporation (PhilHealth) amounting to 15 billion pesos (US$306 million) was exposed in a Senate hearing.

The strongman remains soft on China. In his public appearances, Duterte never fails to mention his special relationship with President Xi Jinping. He has pinned the nation’s COVID-19 recovery on the development of a Chinese vaccine and has pleaded to be on China’s priority list for distribution.

Maintaining close ties with Beijing at a time when the international community is demanding accountability is not without its Filipino critics. The Duterte government opted to downplay the country’s landmark arbitral victory in 2016 against China’s territorial claims in the South China Sea in exchange for bilateral economic concessions. In his State of the Nation address, Duterte admitted shamelessly to the nation that the Philippines has no option but to concede to China’s geopolitical power. This defeatist statement drew harsh reactions from other government officials and publicly.

As Duterte meanders through the COVID-19 crisis, the Philippines’ case numbers continue to rise — there are now over 110,000 confirmed cases, far exceeding confirmed case figures in China. It is poised to be the biggest COVID-19 hotspot in Southeast Asia. Duterte’s tone-deaf speech exposed the weakness of his approach, one that panders to the populist sentiments of his base constituency. A couple of days after his speech, Duterte reiterated his advice to use kerosene as a disinfectant for the coronavirus.

The pandemic has become an unfamiliar ‘enemy’ for Duterte and his populist counterparts around the world. It is difficult to sustain a ‘people versus the elite’ narrative against a viral and existential threat. One cannot merely ‘discipline’ the virus, and people are afraid, hungry and dying.

Julio C Teehankee is Professor of Political Science and International Studies at De La Salle University, Manila, and a visiting fellow at the Center for Southeast Asian Studies, Kyoto University.