South Korea attracted global attention from the beginning of the COVID-19 pandemic. In March, the BBC reported that Seoul’s ‘trace, test and treat‘ approach was saving lives while hospitals in Europe and the United States were overwhelmed. In April, the New York Times reported on South Korea’s capacity to hold democratic elections despite COVID-19, and by June, CNN reported on the lessons to be learned from South Korea’s public health success story. 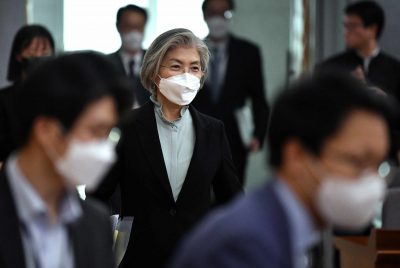 South Korea has promoted its image as a state which was not only successful but also willing to aid and assist those less capable. But underneath this public diplomacy success story, South Korea faces challenges that will impact its core foreign policy goals.

COVID-19 has precipitated changes to the foundations of modern diplomatic practice. Ceremony — the protocols, procedures and even drama that incentivise commitment and effort — has been transformed under COVID-19 to clicks and the accept buttons of webinars and Zoom meetings. Secrecy — the understanding that what is discussed in private will stay private, or at least be plausibly deniable — has been transformed to an acceptance that anything said online, will stay online forever.

With all conversations recorded, there is less opportunity for informal off-the-record conversations to gauge the likelihood of partner support or opposition. Online platforms do not allow such freedom. The ‘stock market’ of diplomatic reputation, built on professional engagement and personal judgements of achievement, trustworthiness and discretion, is considerably harder to ascertain in the ‘Zoomplomacy’ era.

COVID-19 has also contributed to the increasing role of executive government in foreign policy. Across the globe, diplomats are watching their policy role diminish and their administrative role increase. Diplomats cannot gain insight into policy implications if they are not in-country. Most embassies are only now getting back to regular staffing levels.

Over a period requiring consistent diplomatic interaction, these changes impact South Korea more than other states. In diplomatic practice, South Korea could be considered an ardent traditionalist. Seoul was slow to adapt to digital diplomacy despite its technological prowess and even with a growing array of alternatives, it shuns diplomatic innovation. South Korea remains wedded to tried (and all too often failed) approaches of crisis and summit diplomacy to address the core challenge of peace and security on the Korean Peninsula. Unfortunately for Seoul, such approaches are among the most impacted by COVID-19.

As COVID-19 spread, South Korea was in the middle of a number of diplomatic initiatives that relied heavily on the ceremony, secrecy, personal judgement and person-to-person linkages that are the mainstay of modern diplomatic practice.

Initiatives to progress and reinvigorate the diplomatic processes between North Korea and South Korea, and to encourage and support diplomatic processes between North Korea and the United States always required South Korea’s engagement with both the Pyongyang and Washington elite. The most dramatic evidence of South Korea’s reliance on person-to-person diplomacy to progress engagement with North Korea was glaringly apparent on the White House front lawn in March 2018, when the first announcement was made that US President Donald Trump would accept an invitation to meet North Korean leader Kim Jong-un.

South Korea became one of the largest foreign lobbying spenders in the United States to secure support for reciprocal visits, attract community support and directly influence US congressional opinion from the launch of the initiative. With COVID-19, the capacity to build upon these networks of support has diminished.

At the same time, South Korea’s perennial challenge to balance its relationship with its primary security partner, the United States, and its primary economic partner, China, has intensified. Person-to-person diplomacy allows diplomats who are trained for and specialised in facilitating understanding in a relationship to interact closely. In person, a diplomat can emphasise the positive and at worst hide the negative in ambiguity and obfuscation. Announcements from the capital or statements in Zoom meetings cannot replace the facial expressions and body language which build trust and confidence in person-to-person diplomacy.

Connected to addressing the challenges of balancing relations with the United States and China, Seoul’s most innovative diplomatic initiative was building the foundations for stronger relations with ASEAN. But South Korea’s New Southern Policy replayed a standardised foreign policy initiative, similar to the initiatives of previous presidential administrations, such as the Eurasia Initiative or the Northeast Asia Peace and Cooperation Initiative. Both relied upon business, academic and cultural engagement, and from this built networks to further national objectives. Such initiatives can have lasting impacts on bilateral relations. COVID-19 impedes Seoul’s ability to build similar foundations for the New Southern Policy.

Most accounts of the impact of COVID-19 on South Korea’s diplomacy focus on the attention Seoul has gained as a result of its ability to rapidly contain and track the spread of the virus, and its capacity to limit negative economic fallout. COVID-19 added to the well-deserved and growing image of South Korea as an increasingly prominent and globally relevant international actor. But underneath this public diplomacy picture lies a number of growing challenges. COVID-19 and the inability to support a more innovative approach to diplomacy constrains Seoul’s capacity to pursue core diplomatic objectives.