Vietnam’s political stage is heating up again after the country’s internationally-lauded success in containing COVID-19. On 11 May 2020, the Central Committee of the ruling Communist Party of Vietnam began its three-day 12th plenum in Hanoi to discuss who among ‘strategic-level cadres’ are qualified to be elected to its three leading central bodies — the Central Committee, Politburo and Secretariat. 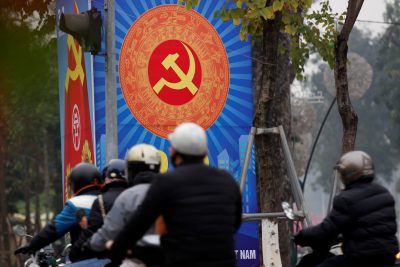 The outcome of this meeting carries implications for who will be installed in Vietnam’s four top leadership positions at the party’s 13th National Congress scheduled for early 2021. Dubbed as the four pillars (tứ trụ), these are the general secretary, the state president, the prime minister and the chairperson of the national assembly.

Opening the meeting, General Secretary and State President Nguyen Phu Trong outlined the agenda by which ‘the Central Committee is expected to deliberate, give opinions, take into consideration, and make decisions on the personnel plan for the 13th Central Committee’. If accepted as expected, his plan will frame the formal election of personnel to the Central Committee, Politburo, Secretariat and Central Party Commission for Inspection, as well as personnel holding key leadership positions in the state organs for the 2021–26 term. These issues will continue to be revisited and canvassed in the next plenums.

Selected details of Trong’s agenda supplied to state media outlets feature familiar themes, such as the party’s superior leadership capabilities and rejection of capitalism, as well as Trong’s own agenda, including his efforts at combatting corruption and reigning in patron-client politics.

So what can be established about the key personnel decisions that lie at the core of the plenum’s business?

Prior to the meeting, Trong signed a document — Regulation No. 214-QD/TW — laying out the guiding principles for selecting personnel for the 13th Congress. Dated 2 January 2020, the document provides a broad framework of selection criteria for titles and positions and for the assessment of personnel who are under the direct management of the Central Committee, Politburo and Secretariat.

The most striking feature of the document was the issuance of new criteria for electing the four-pillar positions. According to Regulation No. 214, the top four leaders must be ‘the centre of unity’ (trung tâm đoàn kết) within the party and earn a ‘high reputation in the mass population’ (uy tín cao trong nhân dân).

Trong, who is currently 76 years old, has gained popular credibility among both the party and wider society thanks to his anti-corruption campaign. While he will likely step down from his current positions next year — as per the rules inked by himself on health conditions, age and the limit of office terms — he is intent on guiding, if not directly selecting, his successor.

In a rare move, Trong issued a public article in the state media on the eve of the 12th plenum, stating the requirement that his successor embraces the same belief and loyalty to Marxism-Leninism, Ho Chi Minh Thought and to the party’s platforms and guidelines that reflect Trong’s own stamp. Those elected to the next Central Committee, Politburo and Secretariat must, among other attributes, ‘possess good ethics and virtues, a purified lifestyle; be exemplary and free from corruption, rejecting opportunism and ambition for power; conscientiously maintaining and protecting unity within the party; and earning credibility from the mass population’.

Who is able to meet those selection criteria in a one-party ruled society?

Despite the puritanical ring, Trong’s concerns about ethical back-sliding among party members and declining public trust in the regime are justified. Under his tenure, Vietnam has disciplined more than 53,000 government officials and party members, of which nearly 100 were under the direct oversight of the central level. Disciplinary actions included some 643 cases of alleged corruption and ‘economic mismanagement’ involving 1579 individuals.

Those prosecuted included an incumbent Politburo member, two members of the Central Committee, one former deputy-prime minister, four former ministers, and a dozen vice-ministers including those from defence and public security, party secretaries, and chairmen and vice-chairmen of provinces. Much speculation on social media suggest many of these corrupt officials had a close relationship with former prime minister Nguyen Tan Dung, who ran a rent-seeking government and a patron-client system.

Prior to the outbreak of COVID-19, the party undertook disciplinary actions against the formidably powerful former party boss of Ho Chi Minh City, Le Thanh Hai, and the incumbent party chief of Hanoi and sitting Politburo member Hoang Trung Hai. Both were accused of being involved in ‘wrong-doing’ — a concept used by the party to imply corruption — in projects causing massive monetary losses. On 18 May 2020, a former vice-minister of defence was brought for trial at the navy military court in Hanoi and sentenced to four years in prison. Another economic crime investigation is under way, which is also speculated to be linked with the incumbent chairman of Hanoi Municipal People’s Committee.

Trong’s agenda, in other words, has real substance and he is intent on protecting and advancing his priorities heading into the 13th Congress.

But the more general impact of the 12th plenum is to launch the season of speculation. While the rumours grow, past experience leads one to doubt most predictions. Trong has indicated there will be at least one more plenum where the personnel issue of the 13th Congress is deliberated. As the Vietnamese sarcastic saying goes, ‘the last day of this year is not the new year yet’, which is particularly true in the party-state’s polity.

However things play out, the 12th plenum demonstrates Trong’s determination to promote the party’s dominance and unity according on his terms.

Hai Hong Nguyen is an Honorary Research Fellow at the Centre for Policy Futures, Faculty of Humanities and Social Sciences, The University of Queensland (UQ).