Law courts in many Asian countries are overburdened. A perfect storm of factors including rapid economic growth, urbanisation, industrialisation and the withering away of traditional governance systems has caused the number of both criminal and civil cases to soar. At the same time, courts are often ill-equipped to cope with the increasing pressure. 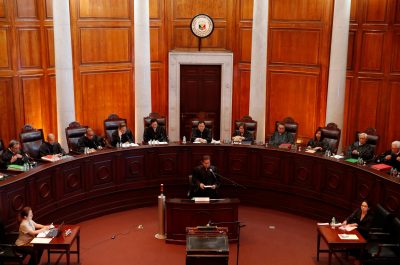 Perhaps the most commonly cited indicator of this phenomenon is court case backlog. These backlogs arise when more new cases are filed than what the courts can dispose of. As ever more cases are processed by the same number of judges, prosecutors and clerks, it takes longer to conclude each case. This slows down the disposal rate further, the build-up of pending cases accelerates and eventually the system grinds to a halt. In some jurisdictions it can take decades for a verdict to be reached.

India has a case backlog exceeding three million cases, Bangladesh has a similar figure and the Philippines, despite its smaller population, has also hit six-digit figures. In Myanmar the backlog is piling up at an alarming rate and Sri Lankan courts are struggling, too. Not only does this hamper access to justice for individual citizens, it also spoils the investment climate.

One country stands out in this picture: the Lao People’s Democratic Republic. The Lao government pursues a policy of providing access to justice through mediation at the village level rather than primarily through courts. Civil disputes and some criminal offences are mediated informally by families, elders and monks. And if that fails, a panel of appointed mediators conducts a round of more formal mediation.

This system is not only geographically accessible (as it exists in some shape or form in every village), it also follows procedures adopted from traditional dispute resolution and so is more familiar to Lao people than court proceedings are. It seeks to achieve reconciliation and communal harmony through restorative justice, which is more in tune with the values of Lao people than the more individualistic and retributive nature of western legal systems.

This is not to say that mediation in Laos always yields optimal results. There are concerns that economically and socially weaker parties could be at a disadvantage, that political or financial incentives sometimes influence outcomes, or that matters over which mediators do not have jurisdiction are mediated when they should instead be referred to the courts or the police.

Responding to such concerns, the Lao government recently adopted a new set of regulations and guidelines for how mediation should be conducted, emphasising the importance of impartiality, integrity and professional conduct on the part of mediators. Given that there exists no baseline and no agreed indicators for how to measure the quality of mediation or its outcomes, it is difficult to say anything with certainty about it.

Still, 75 per cent of respondents in a 2015 survey across three provinces expressed that they were ‘satisfied’ or ‘very satisfied’ with the services of the village dispute resolution committees. And a survey from 2011 covering four provinces showed that 72.5 per cent of respondents ‘expressed confidence in the customary system to solve problems or disputes’. The corresponding figure for the village dispute resolution committees was 66.3 per cent.

The lack of a case backlog in Laos offers another indication of the success of the government’s investment in mediation. Verdicts are generally reached within the statutory timeframes, and over a five-year period the number of new cases filed does not exceed the number of cases concluded.

Unlike in Bangladesh, for instance, where the government is now investing in local justice to alleviate the colossal burden on the judiciary, the Lao government had the foresight to adopt measures to prevent the courts from becoming overwhelmed. Data from the Ministry of Justice shows that there were a total of 3900 cases registered by village dispute resolution committees in 2017. Out of those, only 453 (or under 12 per cent) could not be resolved and were referred to a court.

Laos is, of course, subject to the same factors that are giving rise to jammed court systems elsewhere, and the caseload in Lao courts has been creeping up over the last decade. Between 2013 and 2016 the caseload pending at year-end rose by 35.5 per cent while the disposal rate only climbed by a little over 8 per cent.

Although current levels are still manageable, Lao policymakers and practitioners have taken this trend as a nudge to invest further in the capacity of mediation systems at the village level, while simultaneously ensuring that the formal system can handle matters that cannot or should not be settled through mediation.

Yet when speaking to Lao policymakers about mediation, it is clear that the state’s investment in local justice is driven not so much by the need to save the courts from becoming overburdened, but by a deep-rooted belief that quarrels — however minor they may initially appear — disrupt social harmony and must therefore be resolved quickly and to the satisfaction of all parties.

The venerable Ajahn Chah once likened ‘wrangles and squabbles to small injuries which, if left untreated, risk becoming infected and turn into life-threatening festering wounds. Treating an injury when it is but a scratch will be far easier than when it has caused the blood in the whole body to be poisoned’.

It would appear that this is what Laos is seeking to do.

Marcus M Baltzer is co-director of the Governance and Justice Group. He has extensive experience working to strengthen rule of law and access to justice in conflict, post-conflict and development contexts.