The COVID-19 pandemic combines three shocks: medical, economic and financial. Policymakers around the world must respond to these shocks not only to limit the extent of the immediate economic, health and social damage but also to demonstrate support for the institutions of international economic and financial cooperation in the future. 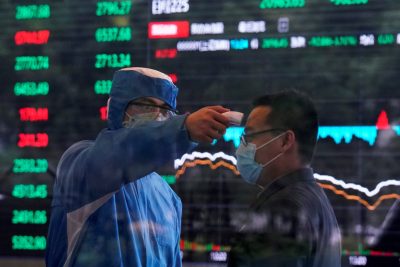 Many people will be infected and a significant fraction will die. Economic activity will decline dramatically, disadvantaging those most vulnerable. Financial flows to weaker countries, developed as well as developing, are drying up and are being diverted or repatriated to major advanced countries. Depending on how the pandemic evolves, the severity of the associated shocks and the effectiveness of the global policy response, financial institutions in both groups of countries may be at risk.

Any recovery in the second half of 2020 depends on how quickly consumption of goods and services picks up, which itself depends on whether there is a second wave of infections. This uncertainty complicates predictions about the size of the economic shock and widens error bands around any forecast.

Asia will not be immune. The simple (non-weighted) average growth rate of seven advanced and seven emerging market Asian economies in 2009 was 1.5 per cent but is projected to be –2.5 per cent this year.

Global and Asian recovery, as well as the subsequent outlook, depend on the capacity of institutions of international cooperation to respond to the pandemic. Some degree of pessimism is warranted.

In the medical area, cooperation between individual and groups of doctors and scientists continues. But the World Health Organization and science itself are under political attack. This could result in uneven development and application of treatments and vaccines.

International and domestic politics have adversely affected trading relations which were already under stress. The principal institution of international cooperation — the World Trade Organization — is not only under attack but is not fundamentally equipped to deal with rising protectionism. In the best of times, the principal effect of global trading rules is to restrain protectionist impulses of countries rather than to punish transgressions. Chad Bown raises the spectre that protectionism could retard the global recovery in the same way that it worsened the Great Depression unless leaders act promptly to reverse current trends.

Fiscal authorities in major economies have acted to support the incomes of workers and the financial viability of key industries. But a coherent framework to address the economic effects of the pandemic is not in place. This weakens the combined effectiveness of individual efforts. While the major central banks have acted aggressively to address the domestic economic effects of the pandemic, they have fallen short in cooperative efforts to extend swap networks and use them to support the IMF.

The Chiang Mai Initiative is set up to supplement IMF lending rather than to pre-finance it. Consequently, the IMF has established a short-term lending facility that will divert some of its scarce financial resources from long-term lending programs.

The IMF has less than US$800 billion in financial resources and will need more. From September 2008 to June 2009, IMF commitments to countries other than low-income countries increased by US$175 billion. New commitments over the next 12 months could increase by US$500 billion, and the available pool of resources could decline to US$200 billion as potential lenders to the IMF become borrowers. For this reason, at least US$500 billion special drawing rights should be allocated to provide supplemental, potential and unconditional financing to all members of the IMF. To date, policymakers have declined to act on this recommendation.

International cooperation on economic policies reached a high point in response to the global financial crisis. Ironically, the post-World War II upward trend in globalisation later reversed. A failure to respond cooperatively to the threats from the COVID-19 pandemic could accelerate this new trend.

Edwin M Truman is a non-resident Senior Fellow at the Peterson Institution for International Economics (PIIE), Washington DC. He was formerly assistant secretary for international affairs at the US Treasury and director of the division of international finance at the Board of Governors of the Federal Reserve System.