Tensions between Jakarta and Beijing have been flaring following a January 2020 incident in the North Natuna Sea in which the Chinese Coast Guard escorted illegal fishing vessels into Indonesia’s exclusive economic zone (EEZ). Indonesia responded seriously to the illegal action conducted by China by sending military patrols to the North Natuna Sea. 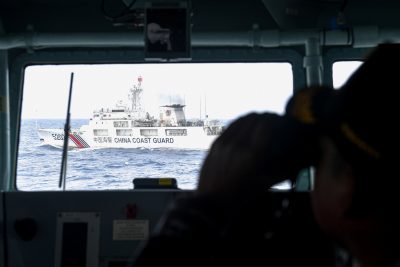 The Indonesian and Chinese foreign ministries agree that the two countries do not have any territorial disputes. China has confirmed that the Natuna Islands belong to Indonesia and that Indonesia is a non-claimant state in the South China Sea disputes.

The friction arises over China’s ‘nine-dash line’, the region within which China claims historic rights and which overlaps with the Indonesian EEZ in the northern parts of the Natuna Sea. Under the United Nations Convention on the Law of the Sea (UNCLOS) there is no recognition of the ‘nine-dash line’. The July 2016 Permanent Court of Arbitration ruling on the Philippines vs China confirmed this.

The Chinese claim of traditional fishing rights around the Natuna Islands cannot be based on Article 51 because China is not an immediately adjacent neighbour to Indonesia. The southernmost parts of Chinese claims in the Spratly Islands are 1100 km from the Natuna Islands, far beyond the maximum size of EEZs.

Second, Article 51 of UNCLOS also stipulates that the ‘terms and conditions for the exercise of such traditional fishing rights, including the nature, the extent and the areas to which they apply, shall, at the request of any of the States concerned, be regulated by bilateral agreements between them’. Regarding traditional fishing rights, there is no such bilateral agreement between Indonesia and China.

Third, an argument put forward by one Chinese analyst invokes Article 74(3) of UNCLOS in favour of traditional fishing rights in the North Natuna Sea because it requires that ‘coastal states shall make every effort to achieve a provisional arrangement pending the maritime delimitation agreement’. But this provision has no relevance in the case between Indonesia and China because Indonesia and China have no pending maritime boundary delimitations — as confirmed by both countries’ foreign ministries. So there is no need to create such a provisional agreement between Indonesia and China.

Article 74(3) was used by Indonesia and Malaysia. They created a Memorandum of Understanding (MoU), the Common Guidelines Concerning Treatment of Fishermen by Maritime Law Enforcement Agencies. Under the MoU, the two states agreed to the kinds of measures that could be used by authorities from both countries with respect to any law enforcement in the un-delimited area between Indonesia and Malaysia. Again, this provision does not apply to Indonesia and China because currently there are no pending maritime boundary issues between the two countries.

The Indonesian government has made the right decision to refuse to negotiate any maritime boundary delimitation with China regarding the North Natuna Sea. There were some differing opinions among Indonesian officials in terms of how to respond to China on this issue. Indonesian Coordinating Maritime Affairs and Investments Minister Luhut Pandjaitan demanded a calm response to China, considering that conflict might distract Chinese investment in Indonesia. However major officials and public opinion still urged the government to take a strong stance regarding China’s incursions into the North Natuna Sea.

Arguments that China has traditional fishing rights in Indonesia’s EEZ surrounding the North Natuna Islands are based on misconception.

Aristyo Rizka Darmawan is Lecturer in International Law and Senior Researcher at the Center for Sustainable Ocean Policy, Faculty of Law, the University of Indonesia.