On 15 April 2020, the legislative elections to choose the 21st National Assembly were held in South Korea. President Moon Jae-In’s ruling Democratic Party (DP) was elected in a landslide victory, winning a total of 180 out of 300 seats. The DP won 163 out of 253 directly contested seats (49.91 per cent of votes) and 17 out of 47 proportional representation (PR) seats (33.35 per cent of votes) through its satellite party. 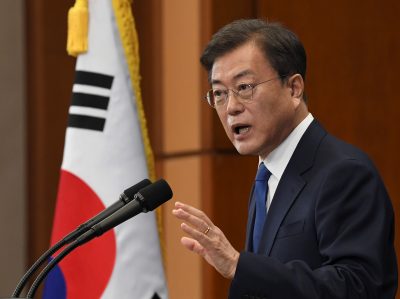 This is the first time that the ruling party has won more than 60 per cent of the seats since South Korea’s transition to democracy in 1987. The DP has now won four national elections in a row since the 20th legislative elections in 2016 that occurred a year before Moon’s inauguration.

The results of this election are important for the future of South Korean democracy.

For the past three years, the National Assembly under the Moon government has frequently faced a legislative stalemate due to extreme political polarisation between the progressive bloc and the conservative bloc.

Under the National Assembly Advancement Act (NAAA), without consent from the opposition, the legislation of Moon’s reform agenda was virtually impossible to pass unless the ruling block secures 180 seats. With its landslide victory, the DP can now bypass the restraints of the NAAA and avoid ‘vetocracy’.

Second, the UFP’s election defeat threatens its political existence. The UFP was created through the merging of the Liberty Party of Korea and minor conservative forces separated amid the political turmoil of Park’s impeachment.

The opposition UFP was not free from responsibility in the scandal surrounding Park’s impeachment. The conservatives were also trapped in Cold War ideology and conceived of as reactionary forces that simply opposed the government no matter the circumstances. This was an election in which South Koreans made political judgments on the conservative party — unchanged even after Park’s impeachment.

Third, the South Korean trend towards a two-party system is likely to be strengthened.

South Korea’s electoral system before the 2019 electoral reform was formally a mixed-system (mixed-member majoritarian). Under this system, casting two votes — one for candidates and the other for the party — South Korean voters elect 253 district-level representatives through plurality rule and 47 national-level seats from closed-party lists through PR.

But due to the low proportion of representative seats (15.7 per cent), it functioned virtually as a majoritarian system. This system, combined with the centralised presidential system, creates a winner-takes-all outcome, which yields high levels of disproportionality and a large percentage of wasted votes (around 50 per cent of electoral district votes).

As a result, there was a strong campaign from civil society and minority parties for reforming the electoral system to make it more proportional.

At the end of a political tug of war, a reform proposal for a semi-mixed member proportional representation style system, which was far behind the original proposal, was passed in late 2019. The total number of seats, as well as the seat ratio between the constituency and proportional list, was maintained.

Attention was drawn to whether a more proportional party system could emerge through a new electoral reform bill. But the ratio of the linkage between the two tiers was set at 50 per cent and there is a cap for the number of seats assigned through the linkage (30 seats out of 47). With voters empowering the ruling party, the distorted electoral reform only strengthens the incentives for a two-party system.

Fourth, the outbreak of COVID-19 made the election extremely unusual. South Korea held this election in the midst of the pandemic. The question of whether the election could be held safely during the spread of the virus received worldwide attention. Citizens had the opportunity to endorse or judge Moon’s pandemic response directly in the polls.

But during the last three years of the Moon government, general discontent over the progression of South Korea’s democracy has increased from both the left and right ends of the ideological spectrum. This discontent was the driving force of street politics.

South Korean endorsement of representative democracy will hinge on two factors — Moon’s future performance on delayed reform agendas and the rebuilding of the conservative (UFP) into a reformative force.