In the densely populated South Korea, just a hop away from China, COVID-19 hit early and strongly. By mid-February, South Korea had the second highest number of infections in the world. Since then the number of cases has been slowed down to a trickle — but clusters keep resurfacing in blind spots such as church congregations, fitness classes, night clubs and warehouses. 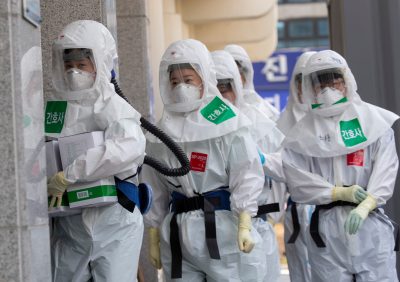 COVID-19 has wreaked havoc on the South Korean economy and labour market. The outbreak scared customers away from the streets, stores and entertainment venues. Businesses shut down both as a preventative measure and in response to declining demand. Exports fell by nearly a quarter year-on-year in April and by nearly a half in May, highlighting South Korea’s heavy reliance on foreign trade and its vulnerability to shocks in China and the United States, its largest trade partners.

Workers have been hit hard by the drop in job opportunities — particularly because the country’s factor markets remain severely fragmented between the industry and services sectors. When one sector undergoes mass layoffs, those dismissed have trouble finding vacancies that match their skill set.

In March alone, 1.6 million workers were furloughed or laid off following business closures. During April, 467,000 workers lost their jobs and an estimated 830,000 became underemployed or transitioned to insecure jobs, resulting in a jobless rate of 14.9 per cent. The additional score of workers sidelined to less preferred positions and those receiving a pay cut or pay freeze could be in the millions.

Fresh graduates and those lacking job experience and employable skills face dire prospects. As job opportunities dried up and firms struggled to accommodate their regular-contract workforce, temporary hiring fell dramatically — by half a million in May. Approximately 9.3 per cent of young workers are now unemployed and another 17.3 per cent are in precarious jobs.

Given the existing structural obstacles in accessing decent jobs, women and young people will face challenges re-entering the job market. Pockets of underutilised workers are likely to endure long-term hardship due to the mismatch between their deteriorating skill sets and increasingly competitive openings. This will lead to a further divergence of economic fortunes across society.

The pandemic has exposed structural faults and vulnerabilities weighing down the South Korean economy. These are giving rise to a state of dualism across the ‘primary’ and ‘secondary’ sectors.

The primary market consists of business conglomerates (chaebol) and their subsidiaries engaging in manufacturing and industry. These firms have been sheltered from COVID-19 impacts by their cash holdings and cross-ownership, and their long-term relationships with government, which in some cases have resulted in eyebrow-raising bailouts. The secondary market is populated by small and medium sized enterprises (SMEs) and ‘mom-and-pop’ merchants. These businesses are mostly service providers and subcontractors to chaebol.

SMEs, being ultra-competitive on cost rather than on product quality, are unable to finance innovation or transformation — or even pay the ever-rising minimum wages — amid market changes. That leaves them at the mercy of the business cycle.

Workers in primary-sector firms have been weathering the storm relatively unscathed, certain they will have a position to keep. By contrast, secondary-sector workers find themselves without job prospects for the months to come.

This state of market dualism is maintained by inconsistent unevenly-enforced regulations, inadequate social protections and unbendable norms of employer–worker and chaebol–subcontractor interaction. Such norms are grounded in Confucian culture as well as in structural realities hindering the productivity of SMEs and irregular workers. Government does little to empower entrepreneurs or promote the integration of non-mainstream workers. A lack of employment protection and weak anti-discriminatory provisions perpetuate the precarious existence of secondary-sector workers.

The depth of the crisis calls for a significant government response to alleviate suffering, keep the economy in a gear and boost the recovery. But this response should not come at the expense of fiscal solvency. The government should also take advantage of the slowdown to tackle structural problems. A prudent response should supplement broad crisis alleviation measures with targeted relief to vulnerable socio-economic groups.

The South Korean government responded to COVID-19 with large-scale public health and economic-stimulus programs. The Bank of Korea reduced borrowing rates twice and the government introduced a 270 trillion won (US$232 billion and 14 per cent of GDP) fiscal stimulus package. This included rolling out ‘basic anti-disaster income’, a system of targeted vouchers of 400,000–1,000,000 won (US$360–900) distributed to two-thirds of all families.

But the voucher program has been too broad and insufficiently progressive, making it wasteful. A large bulk of voucher purchases simply substituted existing spending by middle-class households while failing to help the poor cover their basic needs.

The voucher program failed to save many SMEs from shutdown. Job growth has not rebounded. The most vulnerable workers remain stuck with no job prospects. And the government has shied away from long overdue reforms to usher in more fluidity, transparency and healthy competition among firms and workers. While some workers vie for a diminishing number of jobs in their pre-assigned market segments, others are systematically overlooked because they do not fit the industry fold.

The near-universal cash transfers are a half-hearted attempt to supplement a weak social-protection system. A more effective way to reignite growth would be to promote innovation and fresh investment by underutilised firms and workers.

As part of the Korean New Deal being pursued by the Moon administration, government and civil society should help SMEs overcome bottlenecks in supply chains and financing currently holding them back, and should assist workers with retraining and upskilling. South Korea needs better market-integrating and equalising reforms to carry out these necessary changes.

Vladimir Hlasny is Associate Professor in the Department of Economics at Ewha Womans University, Seoul.