With an official total of 351 cases and six deaths four months after the first COVID-19 case was confirmed, Myanmar appears to be weathering the pandemic. Despite limited testing, the combination of government responses, community involvement and arguably sheer luck has so far spared the country’s long-neglected and under-resourced health system from being overwhelmed. 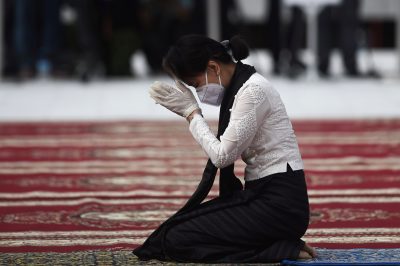 On the economic front though, Myanmar faces a much grimmer reality. The World Bank forecasts growth will tumble from 6.8 per cent in 2018–19 to just 0.5 per cent for 2019–20, with the possibility of contracting by 2.5 per cent if the pandemic lingers.

An estimated 250,000 people have been left jobless, including over 110,000 migrant workers returning from neighbouring Thailand and China. According to a survey by the Asia Foundation, around 29 per cent of businesses had to close temporarily between March and May, while 92 per cent of businesses are reporting lower sales.

As export orders dwindle due to global uncertainty and the kyat appreciates against the dollar, the manufacturing industry (including the crucial garments sector) is bracing for major layoffs. This could have profound consequences, especially with elections scheduled for 8 November.

Food security concerns have also been raised. The agriculture and fisheries sectors face financial hardships from declined exports to China, which led to price plunges just as farmers were set to plant their monsoon crops. Sector insiders warn that the impact of such disruption will only truly be felt as Myanmar approaches the monsoon harvest in September and October.

The government has implemented measures to cushion the economic ramifications of COVID-19. In late April, it unveiled its ‘COVID-19 Economic Relief Plan’ (CERP), a US$2 billion package representing 2.5–3 per cent of GDP. The CERP will be funded partly by reallocating 10 per cent of 22 government ministries’ budgets, including that of the Ministry of Defence, along with loans and grants from the World Bank, the Asian Development Bank and other international donors.

Under the CERP, around K287 billion (US$210 million) in food and cash aid will be distributed. In tandem, the government implemented an electricity subsidy scheme of K35 billion (US$25.55 million) for 4.5 million households in April, and provided some coverage for workers affected by factory closures through the Social Security Board welfare program.

The other major component of the CERP is the extension of low-interest loans to businesses under the COVID-19 Fund. Between April and early July, 3393 businesses were extended a total of K101.13 billion (US$74 million), with over 75 per cent of them specifically for micro, small and medium enterprises. It has also convened multi-stakeholder platforms to find cross-cutting solutions to the challenges of the pandemic, including mobilising civil society.

Front and centre of this is State Counsellor Aung San Suu Kyi, who as de facto head of government has assumed a very visible role in the COVID-19 response. Leveraging her strong personal popularity, she has tried to assure the public and confer a sense of direction. One flagship initiative has been her televised online meetings with key representatives from different sectors (such as frontline doctors, business owners, labour unionists, volunteers and grassroots officials) to garner their input.

Weak coordination and communication have long been major issues for the Myanmar government, but these have been accentuated by COVID-19. In a number of crucial instances, the government’s abrupt or vague announcements have led to avoidable hurdles, confusion and accusations of not thinking things through. For example, the Asia Foundation found that two-thirds of businesses surveyed had not heard of the government’s loan scheme.

Compounding these issues is the sclerotic bureaucracy that is bloated in certain areas but desperately understaffed in others — especially in sectors charged with implementing government policy in ethnic minority areas. This in part has led to a perfunctory discharge of duties that hampers policy implementation. Photos abound on social media of government staff conducting thermal screenings with physical distancing but with large, dense crowds waiting behind to join the screening queues, defeating whatever purpose was intended.

To make matters worse, the bureaucracy has grown house-trained under successive regimes to present Potemkin villages to senior levels of government. This means policy is often unaligned with the situation on the ground due to a lack of reliable or timely data. That said, the government — and the health ministry in particular — has worked hard to present as much data as possible on COVID-19.

Aung San Suu Kyi has been a central pillar in the government’s response to COVID-19, highlighting her outsized role in the civilian government and the semi-organic personality cult that has long enveloped her. Most participants in the televised COVID-19 meetings have taken to addressing her as ‘Mother’ while state media regularly publishes her social media posts.

Myanmar’s low case count to date vindicates the government’s approaches and especially Aung San Suu Kyi’s leadership style, at least among the Bamar ethnic majority. This is further driven home by her supporters who juxtapose the current situation with the former military junta’s handling of Cyclone Nargis in May 2008 which killed an estimated 150,000 people. But the government’s approach also carries the risk of stunting the development of the country’s fledgling civilian institutions.

With the economic situation set to become increasingly uncertain and elections in three months’ time, all while the spectre of spiralling COVID-19 cases remains, the government will need to bank on Aung San Suu Kyi’s domestic popularity alongside the collective effort and resources of different stakeholders to mitigate the multi-faceted impacts of the outbreak.

Kyaw San Wai is a research officer at a Yangon-based public health organisation.