Predictions of recessions in countries affected by COVID-19 no longer surprise anyone, but the outlook may be getting even worse for commodity-exporting countries. The World Bank forecasts that the economies of commodity-exporting developing countries will shrink by 4.8 per cent, a much sharper decline than other developing countries. This is important for Indonesia, where natural resources — especially oil, gas, coal and palm oil — have an outsized role in the economy. 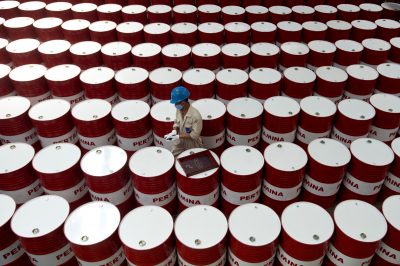 Unlike the 2008–09 global financial crisis, the COVID-19 pandemic started in China — the primary importer of most commodities. Lockdowns and other measures to limit the spread of the virus are severely disrupting production processes that use these commodities. As factories close down, demand for raw materials also dwindles. Supply chains that developed over many years are also being disrupted by travel restrictions and social distancing.

Despite government support intended to prevent unemployment and alleviate the effects of economic slowdowns, a substantial decline in consumption and investment is unavoidable. This has a disproportionately large effect on commodity producers. A small decline in demand for final goods leads to a much larger decline in demand for raw materials such as palm oil, rubber, copper and iron. A fall in investment will hit even harder given the role of commodities in construction and machinery production. With travel and tourism practically vanishing overnight, energy demand — especially for fuel — also dropped to a level not seen in decades.

The decline in commodity demand is reflected in commodity prices. Oil led the price decline, dropping by 52 per cent from December 2019 to May 2020, followed by natural gas at 36 per cent and coal at 20 per cent. Agricultural commodities had a more modest decline of 7 per cent during the same period, but palm oil prices declined at the much steeper rate of 25 per cent.

The central government’s budget deficit in 2020 is estimated to reach 6.34 per cent of GDP, a historically high deficit considering Indonesia’s constitution has a hard limit of a 3 per cent annual budget deficit. The latest budget (Perpres 54) allocated 10 per cent of government spending to COVID-19-related assistance. But the deficit is mainly caused by a reduction in estimated revenue (23.9 per cent lower than the initial budget), rather than an increase in spending (7.8 per cent higher than the initial budget). These fiscal impacts may affect the government’s ability to deliver services, now and in the long term.

Coal and palm oil production also employs millions of people, especially outside Java. The declining prices of both products will increase the poverty rate.

The effects on employment are especially important in the case of palm oil because of its labour-intensive nature. While employment statistics for the sector are not readily available and estimates vary, some sources indicate that oil palm plantations employ between 3.7 to 8 million workers. Other estimates suggest that the sector employs 16.2 million workers when downstream industries are included. Nearly all of these jobs are concentrated in two islands, Sumatra and Kalimantan.

While Indonesia has a good and improving record of supporting the poor, it is not prepared for the unprecedented scale of this crisis. Its fiscal space is limited, and less tax revenue will not help. More importantly, data regarding the locations of vulnerable people remains scarce. Identifying these people would require huge efforts — not to mention finding enough money to support them.

The Indonesian rupiah sharply depreciated amid unprecedented capital outflow in March, when many started to take COVID-19 seriously. This depreciation helped buffer the decline of Indonesia’s export value, especially for coal and palm oil. Exports data show that while their export volume has declined compared to the same period last year, it is still above the lowest levels of the previous five years.

Still, concerns remain. The rupiah is starting to stabilise, especially after a surge of dollars into the market and an interest rate cut by Bank Indonesia. Based on the Purchasing Manager’s Index, only China shows promise in manufacturing recovery. Other important buyers such as India, the European Union, and other ASEAN countries are still struggling with COVID-19. Some countries, including Indonesia, are declaring their economies open for business, but whether demand will recover remains to be seen. The possibility of a second wave of infections still looms.

Ensuring safety through social distancing while maintaining employment and peoples’ livelihoods is a formidable challenge for every country — especially a developing one with limited fiscal space like Indonesia. In the short term, the most important thing is deciding how to open the economy safely. But in the long term, this crisis highlights the importance of diversifying away from dependence on commodity exports and expanding the tax base beyond commodity companies.